Preconceived ideas of North Korea are pervasive and questions usually center around what is it, not where is it.  Just the official title Democratic People’s Republic of Korea, is a name to some that just seems to scream hypocrisy. Things were different the last time I visited and wrote about the country a few years ago.

And, to even the most casual observer, getting thoughts of poverty or oppression out of your mind when North Korea comes up is a struggle.

But what if there is a new struggle in NK, one that is slowly showing itself out on the streets, inside their handbags and flying high above the cities?

It might not be the struggle that you would expect or maybe even hope for–that of a struggle against the regime and its leaders.  But it is one against time, literally on an imported watch, or an invasion of chats on their mobile phones, not from foreign aggressors but from a cluster of classmates and friends.

International flights arrive daily in the newly built Pyongyang Sunan International Airport (FNJ) from China, Russia, Malaysia and beyond.  It doesn’t seem that much but Koryo Airlines not only has a fleet of planes, but a fleet of advertising on taxis around the developing cities.

Little more exemplifies this than when you first set foot on the airplane and you see that the seats have been divided into classes.  First class, in the front with nice comfy chairs and the all too familiar coach seats in the rear as economy class.

And these first class seats are not only reserved for foreign guests, but for North Korean citizens as well.  Right up front, with his Kim Il-Sung pin proudly displayed over his heart was a citizen of the hermit kingdom.

“Everything is for the Government!”

I was left with the others in the back and by that I mean a businesswoman with her daughter and her pair of Gucci shoes.  She was also tri-lingual as our conversation moved from sign language to Chinese which we both spoke as second languages and then to English for fun.

As an American, I was not allowed to take the train in from China as I did eight years ago.  Yep, the aggressors must fly in.

All other capitalists can take the train, whether you are from Great Britain, France, Canada, or any other nation except South Korea.

Sorry to say that the only trouble for an American entering North Korea today is simply the he or she must do it by plane.  For me as a returning visitor, I was quite excited to fly in this time rather than the 6 or so hour train from the border city of Dandong, China in the NE province of Jilin.

Today, in North Korea you can basically do whatever you want as a tourist.  And the work camps are open for you and everyone to have a visit.  So book now and you are all on your own.

Well, not quite yet.  Although it is liberalizing as far as tourism goes I was met this time, as I was last time, by a pair of guides or ‘minders’ which is the more often used term in journalism.

A man in his mid-to-late 30’s and a young woman in her mid-20’s both with the sir name of Lee greeted me.  I was accompanied by them at all hours of the day and was only alone once back in the hotel for a rest.

I knew I would have guides, and last time I was lucky to be joined by not only Mr. Pok and Ms. ‘UB’ but also by the Pyongyang television bureau chief, and even others sometimes totaling six North Koreans to me.  Despite the similarities I knew I would encounter, I also knew I should expect changes. 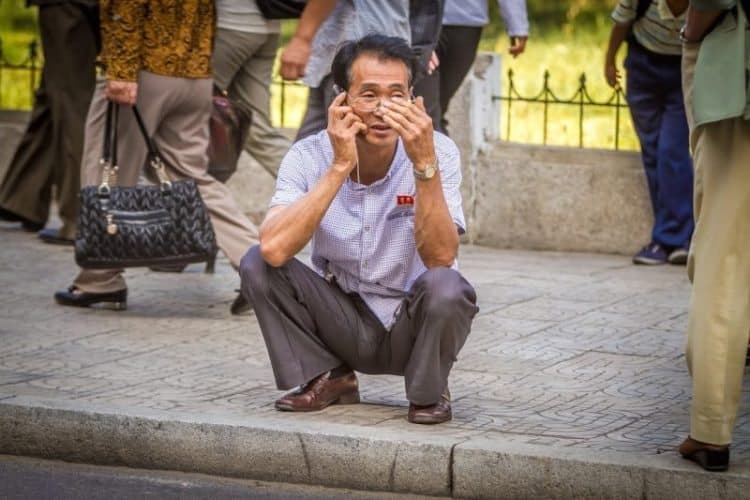 But, what were they going to be?  That was a bigger question to me than my initial question on my first visit which was, what is going to happen?

It is hard to shake the idea that the dark spot on the map has a bit of light… and more than a bit, but quite a lot of light.

Pyongyang at night is no longer mostly black.  And it is not only the monuments of the Juche tower, the Arc de Triumph, or the gi-normous pair of bronze statutes of the Eternal President and the Great General which are lit up (previously only Kim Il-sung).  The bridges have streaming neon lights, the new high-rises sculpt the cityscape with their shapes and colors.

The Juche tower still shines and shines brighter than ever before.  Cars zoom along the banks of the Taedong River and over the many bridges that connect the different districts of Pyongyang.  The city squares have new big screens that play “north K-pop” and TV dramas and are a popular form of entertainment for the city at night.

One of the bigger developments that is pushing much of this on a personal and cultural level is the addition of mobile phones.  Samsung and LG are not the most popular in NK, but a brand named Arirang.

There are few things that rival the philosophical concept of Arirang on either side of the 38th parallel.  And maybe it will be not only a cultural tradition that spans the current political divide, but it could be the Arirang phone itself making calls along a porous border.

From a North Korean perspective, the only thread that is possibly woven more tightly than Arirang is that of Juche which is a concept of self-reliance created and given to the Korean people by none other than Kim Il-sung.

Mobile phones have technically been around since 2003 or so, but there prevalence really started to take hold after 2007.  More than half of Pyongyang residence had mobile phones by 2011 and now mobile phones are seen all across North Korea.

The power of connectivity has engaged the population with popular culture, apps of various sorts and of course the political party doctrine.  Visitors’ mobile devices are no longer forbidden despite them not having service.

And actually that is not 100% true as at the airport you can buy a SIM card that will allow you to use their telecom service but only to call internationally.

Portable devices do much more than help people communicate in an old fashion way.  They are access to information.  The daily news is delivered to their handsets just as yours and mine would be, although from a central source.

And if you got a question the go to place on the net for info for a North Korean is the Juche Encyclopedia.  It is not like Wikipedia as it is not written and monitored by users.  It is written according to the party line.

But what does that mean?  Some of the random searches I made with my guides ranged from political events, sensitive subjects and cultural fairytales.  The Bretton Woods Conference was available and from their translation I received no impression of it being spun in an Imperialist fashion.

Johnny Appleseed was searched and a biography came up giving me more of a historical reality of the legend than I had known as a child.

A concept which is banned in China is the Falungong (a traditional cultural belief which was banned in China after 1989) was available in NK, where even a mention of it in China makes people look over their shoulders.

And finally, about a domestic issue such as the famine of 1995, known as the Arduous March, it was also available in the Juche Encyclopedia.

It is not only the flying transport that has changed.  There are now traffic jams.  There are more stoppages of traffic due to too many cars and not because of route closer due to secrecy or for staged parades for cadres and leaders.

Not quite open for tourist use yet, taxis are prevalent in the big city.  And as alluded to above there are different taxi companies with sponsors/advertising such as the national airline Koryo.

While bikes still reign king in the countryside along with their domestically produced tractor, cars are more and more common place even outside of Pyongyang.  There are color coded license plates which divide cars by who the primary drivers and or owners are.

Black, yellow and white… and there is even a red plate reserved for cars owned by foreigners.  Imagine having a third family car in Pyongyang.  Well it is officially possible.  Land is not yet up for sale, but foreign ownership of cars was not either eight years ago.

New Stores All Over

New convenience stores, more similar to Russian “magazines” or “kiosks” have opened up all over the city.   They give their revenue to the government, but these are not ration shops that distribute food staples and household necessities. Often orange with white trim, they are state owned convenience shops.  They sometimes line up next to each other in bunches serving the public.  “Convenience” has crept its way in.  Mobile

phones, intranet, cars, and time just is more pressing.  PY is ‘on the move.

The shops sell chips, soda, ice cream, chocolates, bottled water, breads, sausages, etc.  They only use local currency, something that visitors are not able to use.  So, don’t think you can stroll up and buy anything you want.

Not yet. These are definitely for the middle class and the goods inside these little shops are all packaged.  That means commercialism. Packed and produced.  And get this, there are competing brands.

Two Brands of Bread–Oh My!

Not just one “milk bread” but two different companies.  There are significant signs of development by their own industries, ‘made in NK’.  Soon there might be NK products in other countries’ stores.

As the woman who I sat next to on the plane attested to, business is going abroad to procure what it needs to develop its unique economy.  Inevitably those products will also leave and be sold elsewhere utilizing their comparative advantage in a global market.

Speaking at length with the guides and in brief conversations with average Pyongyang citizens, the question was not if North Korea is changing, but how fast.  Specifically for tourism, the biggest criticism of those who have been is not that the food was not to their liking, or that the culture was not interesting or that the scenery is not beautiful, or even that homage is constantly given to their leaders.

The complaint is that everything is arranged.  And to this their reply is, the whole country is arranged. And in system as unique as they recognize theirs is, it takes time.  I can bear witness to the fact that changes have been made, albeit seemingly incremental, the changes signify substantial shift in attitude, a desire for a more rapid pace and a willingness to accept ideological shifts if it makes for modern convenience.