A Public Tour of the Massachusetts Institute of Technology, MIT

As a senior at Massachusetts University, I was excited to visit the classrooms and campus greens of another college on the other end of the state.

Trademark Toursallow the public to travel through the Massachusetts Institute of Technology’s campus guided by their own students full of history and a better understanding of what it means to study at the university.

I arrived outside the Kendall Square Red Line Subway Station and met a man with a straw hat and a maroon t-shirt on.

I asked him if he was the tour guide, he informed me he only worked for the company, asked me for my ticket, then handed me a white and maroon sticker that said “Public Tour of MIT.” While other people started to arrive, we all stuck our stickers to our chests and prepared for the walking tour.

Our guide was an MIT student named Alex who was a junior electrical engineering major.

The first stop on the tour was The Ray and Maria Stata Center.  This is a funky looking building that our guide told us hosted MIT’s famous Artificial Intelligence Laboratory.

A lot lot of the research happening around AI has come out of MIT. Built in 2004, Bill Gates was one of many who donated to the construction, at $1 million, in order to further the research and expand the department for artificial intelligence.

The same architect who designed the Center also designed the Walt Disney Concert Hall in downtown Los Angeles in 2004, Alex told us.

Our group was about 10 to 15 people from families to graduate students. What was interesting about the individuals was unlike visiting other colleges, this tour was full of people who wanted to learn about the culture and history of MIT, rather than visiting as possible students.

For me, as a student who has already spent three years on another campus that unlike the atmosphere of the city, is full of surrounding mountains and tall trees, MIT was a different experience. I wondered what it would be like to study in a cities like Boston and Cambridge, at a college founded all the way back in 1861.

Like the University of Massachusetts Amherst, MIT was one of the new colleges that received money from the Morrill Land-Grant Act in order to service an education that would teach citizens the skills of agriculture and mechanical arts.

MIT was born out of this act and still remains in Cambridge today, despite a rocky beginning. Our tour guide explained that during the 1860s, most students wanted an education that involved the classics, but MIT did not teach these courses.

And unlike other American Universities, MIT used a European polytechnic model that focused on lab instruction and hands-on experience with science and engineering.

But before students could even sit down in lecture halls and get their hands moving, the Civil War that began in April of 1861 made it so classes did not start until after the war in 1865. 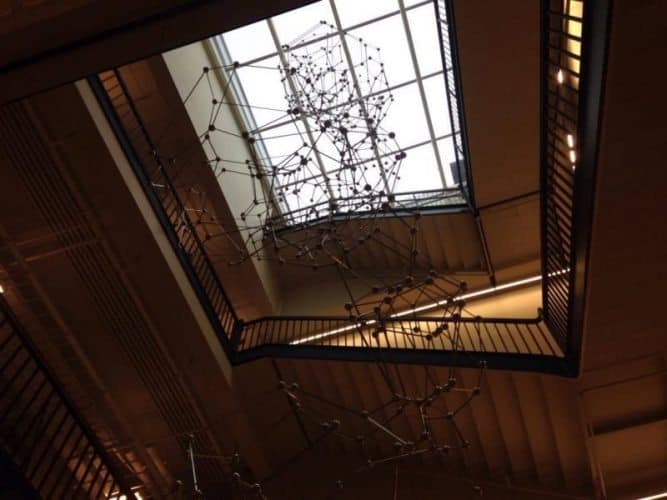 Another interesting aspect of MIT history Alex explained, is that before the college, the word technology did not exist as a word.

William Barton Rogers, the founder of MIT, constructed the word from two Greek words: techne and logos. Techne means a means by which a thing is gained, such as through skill or art. While logos means how an inward thought is expressed.

Thus technology comes together as the word we know today and the word within the title of the university.

Poster, flyers, and artwork fill the walls within MIT’s buildings. Our guide said that in order to understand a bit more about MIT student culture, we should watch out for the flyers hung around the university.

“Do you want to power a trip to Mars?” in big bold letters on red paper was hung outside the main corridor. While events like “Racism, Violence, and Democracy” flyers appeared everywhere. Just like any college campus, there is a lot going on at MIT.

We also visited a student memorial created for the fallen MIT police officer, Sean A. Collier, shot by the Boston Bomber during his fleeing of the city in 2013.

Upset and hurt by losing a member of their community, students put boxes across campus with paper and instructions on how to fold cranes. The project was called “Cranes for Collier.”

Hung in MIT’S Gates Atrium at the Stata Center, students and faculty can pay tribute to the police officer and see the beautiful hanging paper cranes.

The Fusion of Art and Science

The tour took us into a basement of a building with different labs on each side of the hallways.

The metal lab is where students can learn technical skills in order to make art by smithing. Apparently one student even made metal armor for their final project, Alex told us.

Across from the metal lab is the glass lab where students learn glass blowing. This course has the highest number of student enrollment in a class that is not a requirement to graduate.

Down the hallway of these two labs on the basement ceilings, visitors can see thousands of tiny marble balls in cases. From reds to greens, and other vibrant colors, these marbles are the final product MIT students make in their glass blowing lab. The student’s artwork becomes a part of the detail and decoration of the campus.

Alex then took us up the stairs to an exhibit of boat models, called the Hart Nautical Collection.

Students can see ship plans, models, and marine art. And if they find these subjects of interest to them, any student who proves they can swim can take a sailboat out into the Charles River for some fun.

Our last stop was the MIT Green Building, a large structure made out of slabs of concrete with large windows. The building is home to the Department of Earth, Atmospheric, and Planetary Science– things really high up and things really far down.

The architects first ran into some problems constructing the building because, in order to decrease the amount of noise and electricity in order to not disturb the large equipment within the building, it needed to be 19 stories.

But during the early 1960s, Cambridge had a law that banned any building from being taller than 18 stories. Thus, the architects created a passageway through the bottom of the building, shifting up off the ground in order to make the necessary height for the structure.

Using the tall building for some fun, the large windows have been used to play giant multi-color Tetris on the side of the building in order to draw accepted students into the university.

Not only was the tour guide Alex full of one of a kind MIT knowledge, the atmosphere of the campus, and the students present within its’ walls gives any tourists a better understanding of how MIT came to be and what it means to be at MIT today.

Visit Trademark Tour’s website to find out details about their MIT tours.

Carson McGrath is a journalist who loves to write about adventure, politics, and feminism. You can find her on top of a mountain or riding her bike around Amherst.