A Perfect Daytrip to Tolédo, Spain 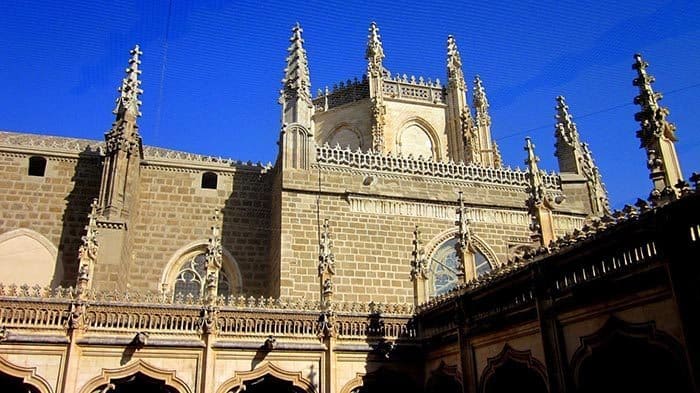 Holy Tolédo! Wandering around the land of Don Quixote

An hour south of Madrid, Spain sits Tolédo, an old-world city that rises out of a crest in the River Tajo wrapped up like a fortress that happens to be preserved and saturated with culture.

This is the place that gave rise to that expression and with good reason. Holy Tolédo!

Day-tripping on half-day excursions to this ancient sacred city of Tolédo is one of those things that would enhance any nearby travel, whether it’s a stay in Madrid or a multi-destination trek like mine and mis compañeros.

Agencies like Rail Europe offer many options to guide you to and through-out a day-trip like this, including a private bus tour like my companions and I booked.

With a tour guide at our hotel at 8 A.M., we were set for adventure and took off on our tour of the 2,700-year-old city heeding our guide’s advice to travel light, bring some water and a snack, and to not skip breakfast before leaving.

After a pleasant hour or so drive that suddenly became much more rural, we arrived at a stunning overlook of the cityscape before the guide took us within the ancient walls of Tolédo.

I am always cautious to use the word breathtaking, but I think here I will make the exception. Not unlike Jerusalem, the city’s religious history is thick and relics remain.

It is one of the most transporting and intriguing views in Spain encased by the river which looks and once acted more like a moat.

Down the dirt road, there is a little place by the fortress’ famous medieval tower entrance to San Martin Bridge called Mesón Bar Il Puente where we fueled up on caffeine with some of the older laid-back locals.

They offer tempting light fare and snacks here as well.

The mellow lights of the ceiling fan kept the ambiance of a cool little respite from the hot late summer sun.

The regional character reflected the lack of pretense in the café’s authentically rustic décor, but the espresso was better tasting than any doppio at a Starbucks in flashy Times Square.

Only ten percent or so of the city’s 80,000 inhabitants live within the fortified walls of Tolédo.

This UNESCO World Heritage Site is known as the only city in the world where Christians, Jews, and Arab Muslims co-existed harmoniously long ago. It is also the backdrop of the classic story of Don Quixote, Man of La Mancha as well as being the official birthplace of marzipan and Manchego cheese.

Walking through these tiny streets was like stepping out of a time-machine (with the exception of a displaced garish McDonald’s).

Our guide acted as a liaison at all the ticket windows and entrances as she led our group through the winding, narrow hilly streets into galleries and landmarks.

I was grateful I heeded the warning to wear comfy shoes because the tour is a good six hours and these roads can be rocky and steep.

The Primate Cathedral of Saint Mary of Tolédo, whose steeple can be seen from the overlook, is an extremely ornate marvel and significantly more than just another old church.

This 13th-century gothic structure was built on top of the original Saint Mary’s of Tolédo, which was consecrated in 587 CE. The Monastery of San Juan de Los Reyes gothic and Flemish style was the inspiration for San Jerónimo, that church that sits beside the Prado museum when Madrid became Spain’s new capital in place of Tolédo in 1561.

With its meticulously designed Mudéjar style ceilings and serene energy in the cloister section, it’s a cool place to catch your breath and admire the beautiful courtyard within, if it doesn’t take your breath away.

The shape of a Cross

This building has an unmistakable shape of a Latin cross with chains hanging upon its façade that was used to hold incarcerated Christians during the re-conquest.

The intriguing religious history of Tolédo and its passionate people implies a lot of fluctuations in its construction with a mosque built on top of the cathedral on top of the synagogue on top of a mosque.

Although peaceful at one point, the Visigoths and Crusaders had their way with the territory eventually.

Seeing places with juxtaposed names like Synagogue of Saint Mary and The Mosque of Christ the Light, and The Chapel of Saint Joseph, where one can see El Greco’s masterpiece, Burial of Count Orgaz are provocative in and of themselves.

Cumulatively, the city is a composite trinity of the monotheistic religions. Passing through the narrow streets with tiny Judaic tiles implanted in the cobblestone, I stopped and watched a boy skipping with his dog as they faded into a narrowing alleyway.

I admired around me the handmade marzipan shops, women selling hand-knit scarves, crafted pottery, and a handmade knife shop carrying on the steel and metal crafting tradition upon which the city was founded 2,700 years ago all telling the everyday story of the locals here.

Spanish is predominantly spoken here, unlike in the more urban areas where you can get away with knowing little of it. In Toledo, however, knowing the basics or using an app to help you speak basic phrases is a good idea.

Usually, I do not mind getting lost when traveling somewhere reasonably safe for the first time, but here I was less inclined to go off the beaten path. Going it alone without a tour guide can be rough because the terrain is more winding and disorienting than even Venice at night.

But it is a small place, so keeping an eye on the horizon with some knowledge of the landmarks above and below can also act as a guide.

On day-trips, there is a lot to take in and sometimes the guides often go quickly, so pop a good-sized SD card in that camera and snap away absorbing what you can.

By the time I got back to Madrid, it was serious siesta time before taking Madrid at night once more.

Then fast-tracking to Barcelona the next morning on what would be an unbelievably quick two-hour high-speed train ride from Atocha Station in Madrid.

Toledo is the perfect day trip, but a Barcelona day trip? It’s fine if in a pinch for time and is now definitely doable for all with an inexhaustible spirit for adventure.

Christopher Ludgate is a travel & culture journalist based out of his native New York City. Chris combines his multi-faceted professions and is ever drawn to adventure and creative outlets. His travel writing pursuits have lead to working with publications such as Passport Magazine, LAX in-flight, AIR Chicago, FLY Washington, and, of course, GoNOMAD.com. Chris is an award-winning filmmaker with films in distribution and screenings around the globe.