Portugal is bigger than it looks on a map, next to the big expanse of Spain and below the much larger landmass of France.  Exploring central Portugal brings activities and memories that are different from the more popular parts of this small country.

Despite its diminutive size, as I hiked a trail in the Serra da Estrella National Park, I marveled at the sweeping view of the green, going on as far as the eye could see.

Portugal is not a big country but there are a lot more wild areas like this park than I thought there would be.

I took a night train to get to Portugal’s third-largest city, Coimbra, located about an hour north of Lisbon.

Coimbra is a city famous for its university and for the vibrancy that comes in a city full of thousands of college students.

We checked into the luxurious old-school former palace, the Hotel Quinta das Lagrimas, where the restaurant is called Pedro and Ines, after a famous love legend going back to the 1300s.

Quinta das Lagrimas is a hushed place with lots of very long hallways, and a late dinner there gave me a chance to get to know the hotel Manager, Antonio Machado Matos, and to get a feel for what things are like in modern Portugal.

The legacy that brings pain, however, is a minimum wage of only 700 euros a month, and that means few people you meet make enough for more than a meager life, and many dreams have long been forgotten.

Lower Wages than Rest of Europe

In every other European country, minimum wages are at least double this but the flipside is a higher overall unemployment rate. What does this mean to a traveler?

Portugal has endured many tough years of austerity, and “sadness doesn’t pay debts,” a young guide named Ana told us. “For you it’s cheap but for us it’s difficult,” she said as we ate at a restaurant she said she could never afford to set foot in herself.

On a visit about three years later, I saw more baby carriages on the streets in central Portugal.

But for visitors from the US or even Europe, Portugal is still a tremendous buy…hotels are way, way less than in neighboring countries and even luxury isn’t expensive here. 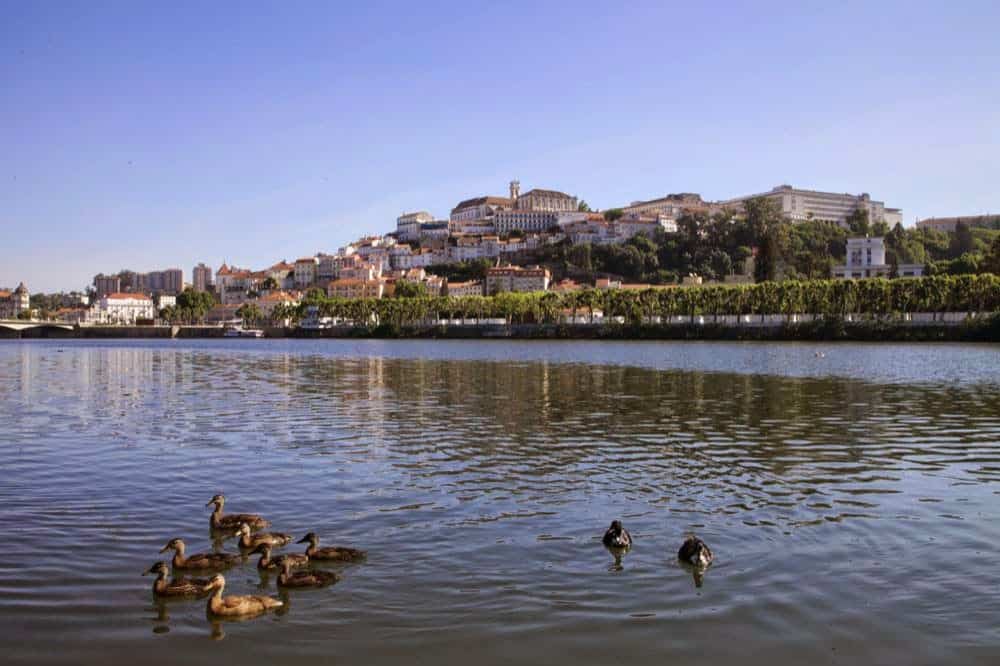 It’s still the famous value that it was twenty years ago, only this time it’s the citizens who are struggling.

But the nature of the people is warm hospitality, we met dozens of friendly locals who in most cases were able to reply to us in English.

Not the Lisbon Crowds Here

Ana told us that this part of Portugal needs more tourists, that both here and the north of the country don’t get the crowds that flock to Lisbon and to the famous Algarve region of the far south with glittering beaches and ex-pats setting up shop.

The university in Coimbra is among the oldest in Europe, it was founded in Lisbon in 1290 and moved to the Royal Palace of Coimbra in 1537.

We took a tour of the university and the adjacent four-story Machado de Castro National Museum which spans a millennium, one of Portugal’s most important museums.

During the Middle Ages, this palace was built over the Roman forum of Aeminium, (Coimbra’s original name) and this newly built museum captures the history from the ground up.

One particularly dramatic piece of art is a life-sized set of sculpted figures of Jesus and his disciples at the Last Supper. They were painstakingly restored after being destroyed, with nearly all body parts intact.

From the top floor of the museum, you look down at a dramatic cathedral wall that unbelievably, was once used in modern times to park buses in. The horror!

One of the most dramatic sites on campus is the famous University clock tower, built between 1728 and 1733, which replaced another famous tower built by John of Rouen, whose paintings are a highlight of the Castro museum.

It has been restored so now visitors can climb up the hundreds of winding stairs and take in the gorgeous view of the Mondego river and the sprawling city around it. One striking bridge stands out—the modern white span called the Europa Bridge, built in 2004, that stands in dramatic contrast to the ancient museum buildings and ancient orange roofs.

This university campus is a UNESCO World Heritage site, and while we were on our tour, proud graduates wore their traditional torn robes—ripped apart with pride and cut with scissors upon getting their final grades and finishing up their classes.

They also showed off their ribbons earned by graduation in certain majors. Coimbra is set on a hill and in the city center, impossibly narrow cobblestone streets intersect with each other where the Old Cathedral is located, built in 1162. On one of the cathedral walls, we saw an Arab inscription, leftover from the days of the Arab occupation of the city.

Fado is played here, in a distinctly Coimbra style. You make a coughing sound to show your appreciation for the music.

The Parque Verde do Mondego in Coimbra

A favorite place to relax in Coimbra during the warm months is Parque Verde do Mondego, on the right bank of the river of the same name. There are bike paths leading from the city center to this wonderful green park, a great place to catch up on reading, lie in the sun, or have a picnic.

Across the Mondego from the tower, you can easily spot the Convent of Santa Clara-a-Velha, built by the order of Queen Saint Isabela. It was built starting in 1286 and became a monastery in 1314, and for a while, it was a popular place for pilgrims on their way to Santiago de Compostela in Spain to stop and rest for the night.

Today you’ll still see the occasional backpack-wearing pilgrim making their way through town, following the path through to Spain.

The next morning as the sun glinted off the Montega river on the backs of ducks, we headed 50 miles north to Viseu, a smaller city perched on a high plateau that is considered one of the most livable cities in Portugal.

There was once a Roman wall surrounding the entire city and the cobblestoned narrow streets all lead to its 12th-century cathedral that faces another church.

We toured a magnificent small hotel in Viseu built in the 1700s, the Casa da Se, with period furniture and a winding central staircase.

Out the window, our guide pointed out a new youth hostel being built, the first in the city.

Biking Along the Dao

There’s a 54 km bicycle trail in Viseu that follows the Dao river here. The ancient 12th-century cathedral faces the Misericordia Church in Viseu, an odd juxtaposition of old and really old.

In Viseu, there are beautiful public artworks that stand out in the city–next to a park, for example, is a pretty tile mosaic on a public wall near the street. A lifesize statue of a famous local writer sits comfortably at his bronze desk next to a park.

Our visit to Viseu included a lunch of very traditional Portuguese entrees at a local restaurant in an office park called Casa Arouguesa. Bow tie sausages, known as Jewish sausages or beef Aroques, veal cooked in the oven and on a grill, and the local Dao wine were offered.

It was quite a filling feast with all of that beef and carbs on a warm May day we almost needed a nap, but we soldiered on, resuscitated by the strong espresso at the meal’s end.

We wound our way out of Viseu up hills into the beautiful countryside, where growing wine is a major local pursuit. We drove up a long driveway to an 18th-century mansion that’s now a hotel, and after seeing the place Paul and I wanted to stay there.

The historic house called Hotel Casa da Insua has its own artisanal cheesemaking facility and ornate gardens with vineyards and apple orchards.

The former owner, Luis Albuquerque, a colonial governor, spent decades traveling in the former Portuguese colony of Brazil, and his collection of fishing tools, primitive weapons, and other fascinating objects compete for attention with the paintings of dignified governors and kings on the Casa’s walls.

Guests can buy the delicate cheese produced by the workers at the Casa, and stroll the grounds–just beware of the noisy swans who might take a bite of your camera!

Up into the Mountains

After our visit, we said goodbye and were soon heading up a winding mountain road, into the Serra da Estrella mountains and the park of the same name. The temps cooled right down and we felt like we were transported to Scandinavia’s forests.

The Serra da Estrella mountain range is about 63 miles long and there are many huge boulders and crazy-looking crags and gorges. Combined with easy-to-access hiking trails and the aforementioned dramatic views, it’s a highlight of Portugal’s outdoor attractions.

Our lodgings in the park felt like we were staying in Sweden or Denmark–The Casa das Penha Douradas Hotel and Spa was built to resemble a Nordic ski chalet, by its Lisbon-based owners, Joao Tomas and Isabel Costa.

Built at an elevation of 1500 meters, the Casa offers gourmet meals prepared by a talented staff of chefs, pampering in a spa, a private pool, and a nice pre-dinner mingle with other guests in the comfortable lounge.

It’s all around 135 euros a night meals included, during the weekends.

The hiking is spectacular and in the winter there is Nordic skiing in trails leading from the inn as well as Alpine at a nearby ski slope. The staff will send you out on your hike with a gourmet picnic, and everything is fresh and as local as possible.

Another attraction down the winding hill in the small village of Manteigas is the Burel Factory, which was started by Joao and Isabel. They took over a struggling fabric mill facing huge layoffs and re-engineered it to produce beautiful colored fabrics and clothing with a smaller staff.

Today you can tour the factory and watch the 20th-century machinery crank to life and purchase beautiful fabric right from the source.

Find out more about visiting Central Portugal at www.visitcentro.com. Our trip was sponsored by Tourism Portugal and SATA airlines, who fly daily flights to both Portugal and the Azores all year long. Getting to Portugal was smooth and included the bonus of the aforementioned unscheduled layover in San Sebastian. Find rail tickets, passes and great information on Rail Europe’s website.