Tip: Bring enough euros, there are no ATMs in the Alps

In Austria, they call it Salzburger Land, an area that includes Salzburg and the Alpine region surrounding it.

My husband Jay and I are committed hikers and when the opportunity arose to visit an old friend who lives in Salzburg, we immediately started looking into what the region could offer us.

We could not have been more pleased! The Salzburger Almenweg is a unique series of connecting trails that link together a group of communities in the Pongau region just south of Salzburg.

The Almenweg traverses 31 stages that can be accessed from any stage and works for day hikes or multiple-day treks with overnight stopovers at any of the 120 mountain huts that dot the region.

All the trails are very clearly marked and range in difficulty from easy to challenging, so it’s just a matter of finding your comfort level. Jay and I opted for a fairly rigorous 2-day hike, which combined parts of stages 15 and 16 along the Almenweg.

Our first morning we drove our rental car for a little less than an hour from Salzburg to a trailhead with a designated parking area. (Buses are also available.) This entailed driving to the tiny town of Karteis, then heading slightly north on a stomach-churning, steeply pitched road to Hallmoosalm where we parked.

From there we set off on a 3 ½ hour climb to the Tappenkarsee hut, going from an elevation of 4,400 feet to the high point of nearly 7,200 feet, then heading down to our hut at 5,900 feet. These are not elevations that typically cause altitude sickness in healthy people.

Our climb the first day was mostly uphill and we encountered few other hikers. What we did encounter – in spades – were cows. This is pure Heidi country – cows with bells, wild flowers, mountain goats, green slopes leading to granite outcroppings — they all conspired to make us feel Heidi and her grandfather were just around each corner.

Tappankarsee hut. The huts have always been the place where farmers lived in the summer while their cows grazed, and the mountains were free of snow.

But now farmers are encouraged to open their huts to hikers who pay for food and sleeping. This provides a huge incentive to hikers who no longer need to carry food and gear on their back and benefits the farmers financially.

From the trailhead to the Karteistori (tori means pass in German), we only encountered a few hardy Austrians who all carried walking sticks and looked at us as if we were a bit crazy to hike without them. We climbed in a sensory caldron of bracing air, snow-capped peaks, streams, and waterfalls, and the shifting light of clouds moving quickly past the sun.

Austria, whose state religion is Roman Catholic, has erected a large cross at each tori. Jay and I spotted the Karteistori cross long before reaching the pass but until we reached it, we had no idea of the view that awaited us. Once there, we gaped as we looked below at the vista, a beautiful Alpine lake, the Tappenkarsee hut on the edge, surrounded by a bowl of granite cliffs on one side and on the side we descended, a wild blueberry-dotted slope.

By the time we were picking our way down the steep incline to the Tappenkarsee hut, my legs were trembling from the earlier exertion. Arriving around mid-afternoon, we were surprised to see how many hikers had already arrived. We were relieved that we had made a reservation, since there were no spare beds that night.

Alpine huts typically don’t have private room but instead feature large rooms with bunk beds that can accommodate any number of sleepers. Our hut happened to have one semi-private room with 4 bunk beds that we shared with a father and son combo.

Likewise, there are no private bathrooms, and tubs or showers are not available. It’s also good to bring slippers, as you’re asked to leave your hiking shoes in an entrance area.

So what now? It was 3 p.m. with no TV, Internet, or common area to put up our legs to relax. Not yet ready to hit the beer (the other hikers’ diversion of choice), we opted to amble to the far end of the lake and stop in for hot chocolate topped with excellent whipped cream at the alm (restaurant) at the other end of the lake.

Food Worth Hiking For

By the time we returned to our hut, it was nearly dinner, and we were in for a real culinary adventure. Our German was

non-existent, and the innkeepers and guests spoke no English. The menu was written on a chalkboard, the food smelled and looked delicious, but we had no idea what to choose. Finally, we pointed to two entrees, a wiener schnitzel for me (I opted for safety) and something called a Fleischkrapfen for Jay.

We nursed a delicious local white wine and beer while we waited with some trepidation for Jay’s meal to arrive. It turned out we couldn’t have made better choices. Jay’s Fleischkrapfen was a variety of spiced meat folded into homemade dough and fried with sauerkraut on the side.

For dessert, we both chose apple strudel that came slathered with thick whipped cream. We topped the meal off with home-distilled blueberry and elderberry schnapps and finished dinner in a haze of gluttony and wellbeing.

People tend to hike in groups on the Almenweg, and the dinner gatherings reflected that. Jay and I had a table to ourselves but we were the exception. Not wanting to retire too early, we found a deck of cards and played gin for an hour or so while nursing another schnapps. At 9, with our roommates already tucked in, we headed off to bed and promptly fell asleep.

By 7 the next morning the hut was bustling. After our great good luck of the night before, we pointed to what seemed a breakfast favorite of other guests and said, “We’ll have the same.” It was another home run, something called Brettljause, which is a platter with local cheese, bacon, sausage, butter and bread.

After breakfast, as we prepared to pay our bill, we uncovered our first planning mistake. We knew the huts did not accept credit cards, but we assumed they were inexpensive. We were wrong. We started on day one with 100 Euros, but after stopping for breakfast along the road, we had 75 left. Our one night stay with dinner and breakfast took every single one of our remaining Euros.

So we headed off on the day’s hike Euro-less. This wouldn’t normally have been a problem as we expected to be back at our car by noon. However our route that day took us across the ridge to the pass at Draugstein and from there to two huts – Draugsteinalm, a restaurant and Steinmann, a dorm. And here is where our lack of money really hurt.

The owners of Draugsteinalm make cheese all summer, and we had just reached the point where some bread, cheese, and buttermilk would have really hit the spot.

We knew if we said anything, the food would be offered free but that seemed rude so we kept our mouths shut.

In addition to cows, this farmer also kept pigs, which would provide the bacon and pork, staples in an Austrian diet, for next summer’s hikers.

All of the huts are serviced by large cable cars that bring goods up from the valley where they are stored in sheds near the huts.

We watched the owner of the Tappenkarsee hut and his young son take a small motor boat across the lake to get their daily provisions, then motor back and use a pulley system to move them up the hill to the hut. It’s an ingenious system and a necessity in keeping these huts operationally viable all summer.

As we expected, we were back at our car by noon after a fairly straight downhill trek. On our drive back to Salzburg, we stopped in the charming little ski village of Grossarltal for an outdoor lunch at a chalet-inn that like all the surrounding buildings was decorated with window boxes abundant with flowers.

The only way we could console ourselves about leaving the Almanweg so soon was to promise ourselves to return next year to hike another section. If we do this each year for the next decade or so, and complete all 31 sections, we’ll each be awarded a hiking pin with a diamond. And we aim to do just that!

Note: Do not try to make telephone reservations at individual huts unless you speak German. Also their Internet reception is spotty so even though their websites have places for making reservations, it is by no means certain that your request will be seen. Instead, go through the Grossarltal Tourist Bureau. And bring enough Euros. The alms and huts do not take credit cards. 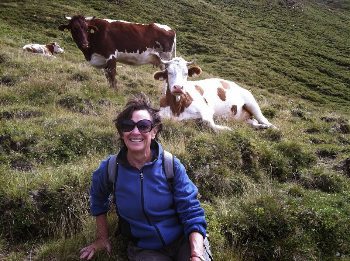 Vicky Schippers is a retired financial and grant writer and is currently a freelance writer as well as a volunteer tutor and doula. She has written three other articles for GoNomad.