Postlingberg in Linz, Austria: A Journey to Fairyland 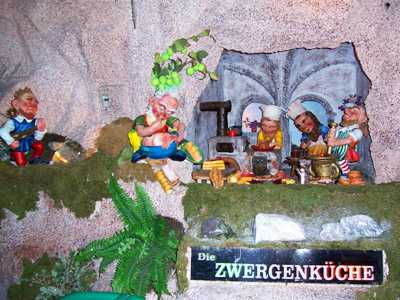 The Zwergenkuche, or miniature kitchen, in Postlingberg, a fairyland in Linz, Austria

Children and grown-ups alike enjoy the Dwarf and Fairly Land of Postlingberg. Postilingberg is the landmark of the city of Linz, Austria and overlooks the Danube River.

On Saturday morning in Linz, Austria, it is market day. The brightly colorful trams of red, white, and blues pass quickly through the square (The Hauptplatz, the main square) picking up and discharging their passengers. In the background I hear the mellow sounds of a Austrian folk group, consisting of a button accordion, guitar and vocalist performing Oberkrainer ethnic folk music.

I stand in the bustling market place in the square taking in the sights and smells of Austria. Through the square out in the distance and high on the mountain overlooking the city I can see Postlingberg. My wife and I are visiting her family in upper Austria.

They are green grocers and provide fruit and vegetables to the local populace. They have two produce stands one is located in Linz and the other in Marchtrenk a small town not too far from Linz.

Market day is a very exciting experience and it is similar to the market that we have in Cleveland, Ohio. People arrive early to be able to obtain the most freshest and delectable foods offered.

My wife and I walk through the market and visit the various booths to see what is on display. We converse with some of the sellers and enjoy some of the samples offered.

We purchase some Swiss cheese then head away from the square, walking through the small alleys to do a little window shopping at the various stores surrounding the square. Around lunch time we remember that one of the stands in the market is offering fresh grilled bratwurst, so we head back to the square to enjoy a bratwurst with mustard on a hard roll and a stein of beer

Later on by about 2 PM most of the shoppers are gone. The customers having purchased their groceries, the market closes and we tear down and pack up the stall in the truck and head home to Marchtrenk.

Later during the week I join my wife’s nephews and go with them to visit the farms and the produce houses to obtain the various products needed for the upcoming market days.

The next morning, grabbing a hot mug of coffee, we hop in the truck and head out while it is still dark. By the time we arrive at the farm the morning light is just staring to clear the horizon.

After we load the home grown lettuce, beans and purple cabbage, we head for one of the local produce houses. It is cold as we scurry from one bay to the other selecting the foodstuffs required. I watch as the nephews select only the freshest and unblemished produce. By about 11 AM we have obtained the needed fruit and vegetables and we head home for lunch.

That evening after dinner my wife’s nephew tells us about the story of Postlingberg. It seems that it is a tradition when a child makes his or her first communion to take them to Postlingberg. It is located up on the mountain overlooking Linz down in the valley.

From the top of the mountain on a clear day you can see the mountain ranges of the Alps and a panoramic view of the city of Linz. Entrance Fees: Adults EUR 4.40, Children EUR 2.20.

My wife, her family and I visit the hill overlooking Linz. We start on an electric railway that takes us from the bottom of the mountain in Linz to the entrance of the grotto.

It is a slow ride up the hill, however it provides time to see a fantastic view of the valley below. Arriving at the top other highlights include the pilgrimage basilica and the underground fairy-tale world of the Grottenbahn.

The electric railway was halted on March 25, 2008, for reconstruction, rebuilding of existing tram cars and the purchase of new tramcars. The line was extended to the main square and now the Postlingbergbahn is more closely integrated into the urban transit system.

From the Hauptplatz in the city center, a passenger can now travel through to Postlingberg and that includes tourists traveling by rail from the boat docks. The official opening of the rebuilt and extended Postlingbergbahn was held on 29 May 2009, in time to celebrate the line’s 111th anniversary.

The parish church and pilgrimage basilica, Postlingberg Church, “Seven Sorrows of the Virgin Mary” is visible from the square in Linz and is perched high above the roofs of the city and is the highest point on Postlingberg. It is of a double-steeple design and was built in 1748 according to the plans of Matthias Krinner. It is the landmark of the Upper Austrian capital. I am told that the church is popular for weddings because of its unique location. 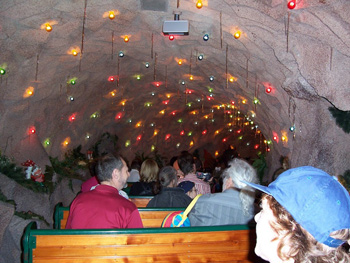 The Grottenbahn, or “grotto train,” was built in 1906 in one of the seven fortress towers built by Maximilian on Postlingberg. It transports small and grown visitors through a colorfully illuminated fairy-tale world. Inside the tower visitors circle around riding a dragon called “Lenzibald.”

During the ride on the dragon, miniature scenes from the lives of the dwarves are illuminated alternately on the left and the right. This is the high point of the ride, a journey through the magically illuminated grotto where all the dwarf figures can be seen at once. A flight of stairs leads downward past the crystal mine and the King’s courtyard of Rapunzel to the cellar of fairytales.

Fairy Tale Land awaits with life-sized figures in fourteen scenes that tell exciting stories from the fairy tales of Snow White, Rubezahl, Hansel and Gretel, and the musicians of Bremen that are laid out on different streets.

An added attraction is a model of the main plaza of Linz that was constructed in 1936. This exciting reproduction shows life around the turn of the century in Linz in a display of all the businesses and shops of the time.

There is a souvenir shop in the exit area of Grottenbahn where there are a fine selection of products from the Grottenbahn CD, coloring books and stuffed animals. All in all whether you visit Postlingberg with children or not, it is place to bring back happy childhood memories.

There are many direct flights from the United States and Canada to Frankfurt or Munich, Germany. However there are no direct flights to Austria. Air travelers can fly to Frankfurt, Munich, Paris, or London and connect to airlines to the Blue Danube Airport in Linz, Austria. The fares range from $1000.00-$1500.00.

In Austria there are many places to stay including hotels and the Gasthaus, a Gasthaus is a modest country inn serving home cooked meals. There is no hard and fast rule but many Gasthaus have sleeping arrangements, especially if there is a picture of a bed hanging out in front of the establishment. 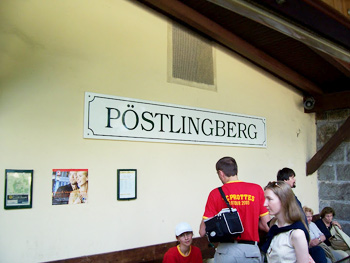 Austria also has many bed & breakfasts (zimmer frei). Throughout the country there are signs along the roadsides advertising them. The local tourist bureaus usually have list of them with prices and further information. They are highly recommended as a delightful way to meet the people and make new friends.

Usually the price can be negotiated. Prices average about $45-$80 per night and they are much cheaper than hotels and normally include breakfast. We have stayed in bed & breakfasts in Germany, Austria, Slovenia and Croatia and have revisited them on several occasions. Also hotel information is available on the Internet.

Pizza is almost as much of a staple in Europe as it is in the United States. I noticed how popular it was when we first visited Europe. Pizza is not made the same way as in the United States. In this part of the world, the crust is usually thinner and the toppings and combinations are different. European sausage has a different taste and of course there are many types of sausages depending on the country visited.

A traditional lunch can be obtained at the Postlingberg Schlossl Restaurant and visit the Schlossl beer garden for less formal food and an impressive view.

A list of restaurants can be found at this site 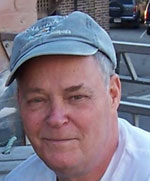 Larry Zaletel is a freelance travel writer, an avid and dedicated traveler, and a retired auditor.

www.gonomad.com
This article was last updated Jan 13, 2019 @ 11:11 pm
If we've inspired you to travel with this story, why not check out the prices to get there and make it happen. Search airfares, hotels, and rental cars here. Thanks!