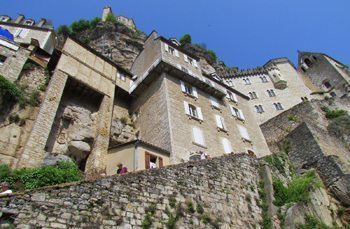 Rocamadour, at an angle. photos by David Rich.

Contrary to what your mom told you, always talk to strangers. Then like me you may meet a personal tour guide for France, a grumpy Brit for traveling Sudan and Ethiopia, a Kyrgyz German lady to help explore the Stans, a feisty Dutch girl for the 19 day Annapurna trek in Nepal and dozens of other fascinating and colorful characters around the world.

But this is about a scuba-diving French pilot with a passion for racing Porsches and BMW motorcycles, and ze French style cooking. At a groggy four a.m. I sat staring at a grinning ringer for Sean Connery’s better looking brother as he climbed aboard the Kota Kinabalu shuttle for the six am puddle-jumper to Sipidan, Borneo.

I demanded, How can you be so cheerful at such an ungodly hour? I was grumpy.
If that were possible his smile widened, I am happy. Today I go diving. He paused and added, as if I hadn’t been able to place the accent, I am French, my fr’en. And you? He shoved out a big paw.

I later witnessed ze accent alone was sufficient to melt women from Borneo to Timbuktu. And in minutes I was up to speed on more planes, champagnes and automobiles than I could have hitherto imagined.

After diving Sipidan and other outings with Philippe, from rafting the Grand Canyon to bopping around Arizona in a club Cessna, I finally journeyed to his hometown of Tours (do not pronounce the s) for an expedition to the Perigueax, his favorite area in the heart of southwestern France.
This was a journey-back-in-time that included a vast range of adventuring.

>Philippe at the wheel. photos by David Rich. 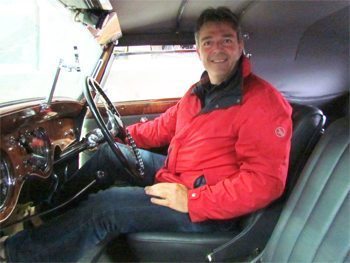 Albi hit me between the eyes with a supertanker style cathedral sculpted from a billion bricks, making Notre Dame look like a mini-chapel. Albi was also the home of Henri de Toulouse-Latrec and his namesake museum, stacked alongside the River Tarn with multi-arched bridges that upon approach looked similar to Toledo, Spain.

Vivid scenes of the damned in hell decorated the inside of the Cathedral, rather like a Playboy Magazine collage dedicated to S&M.

Rocamadour was stacked upon and down a cliff in three vertical sections, castle on top, churches and monastery in the middle and on the bottom, chichi shops, restaurants and the world’s most antique Best Western Hotel (naturally the Hotel De Ville) with authentic medieval décor.

Rocmadour had rivaled Santiago de Compostela as a Pilgrimage magnet in the12th to 14th centuries, attracting the usual suspects from Richard the Lionhearted to multitudes of unwashed peasants.

Every night Philippe whipped up a feast ranging from salmon griddled on the skin, plump scallops, goose fillets with fries, succulent chicken gizzards and other things the typical Yank wouldn’t even contemplate tasting. But no matter how outrageous a main dish might seem from a non-French viewpoint the result was uniformly scrumptious. These were always accompanied by organic salads, specially selected wines, unheard of breads and lovely deserts of fruits, crèmes and mouth-watering pastries. I began avoiding scales.

The Fruit of the Vine

Philippe’s friendship with the owner, the principal photographer and resident sculptress for the Vouvray Winery in the Loire Valley hotbed of wineries netted an afternoon’s wine tasting, feast prepared in a wood-fired oven and a sculpture tour in the winery’s humongous labyrinth of limestone caves. Recollection remains a tad blurry after tasting 16 wines.

The city hall in Tours, France. 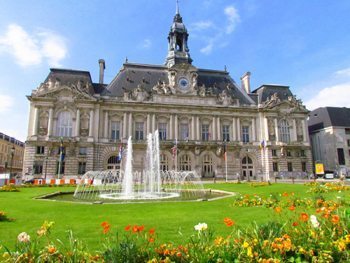 We also grazed on fruits of the vine from a 36HA (90 acre) organic farm owned by Philippe’s professional bike racing friend who’d raced with a chap named Armstrong on the US Postal team in the Sacramento Valley of California. I’d never seen a bike before that cost $11,000; it weighted about four ounces.

We sampled three varieties of strawberries and picked cherries, peaches and apricots from the tree, sampling a cornucopia of every known fruit and vegetable, paired with the proper wines by category. The blurry end must have been super healthy.

From a working farm of 500 sheep faithfully guarded from marauding foxes by a pair of kicking donkeys we explored quaint medieval towns and castles below towering cliffs along the river valleys of Lot, Celi and Dordogne—Collognes de Rouge of brilliant red stone, La Roque Gageac strung along a river lined with classic wooden sailing boats, Cordes sur Ciel built along a hilltop ridge by the Knights Templar as refuge after the Crusades, Les Milandes Castle owned by the estimable Josephine Baker, cliff-top Marqueysaac Castle coated with canary yellow lichen and St-Cirq-Lapopie strung down a precipitous ridge to the river.

The farm’s owner, genially cheerful Jacques, hosted us on our last night with local cheeses and copious bottles of homemade walnut brandy. The French have a flair for graceful living. 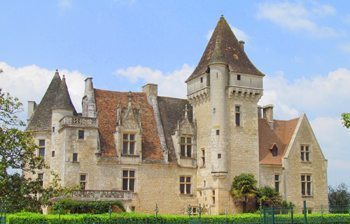 Every morning I’d climb onto the back of Philippe’s hotdog BMW two-wheeler and we’d race to his favorite bakery at 150 KPH (95 MPH). We swooped back with me clutching whole-grain baguettes like a lifeline.

On alternate afternoons we’d hit the curvaceous back roads in a souped up 1990 Porsche 930 that the factory successfully engineered to defeat the previously dominant Ferraris at LeMans, 60 miles from Tours.

But the most fun was riding with an extremely nervous Philippe as he drove a friend’s incredibly rare 1938 Delahaye that was worth more than we’d care to contemplate.

On the last day we rode along the broad River Dordogne, up and up to lofty Domme with sweeping views across the green French countryside, sitting ourselves down on a swanky hotel terrace. A striking slender blonde waitress informed us that drinks could only be served to hotel guests.
Philippe smiled and gestured, Maybe you could check us in, eh?

The waitress smiled right back. Ah, Gentlemen. What would you like? Had she misjudged Philippe?
When she delivered the tray of Belgium trappist beers and stood chatting at length with Philippe, telling him about her childhood in Holland, I felt like I’d received a sign: always talk to strangers.

When You Go: Talk to strangers wherever you go. When next sallying forth visit those excellent new friends and you’ll never have to worry about where to stay, what to see or what to do when you get there.

David Rich is a regular contributor to GoNOMAD who lives and flies his plane out of Glendale, AZ Read more David Rich GoNOMAD articles.

amzn.to/3488kUK
If this story has inspired you to travel, why not check out the prices to get there and make it happen? Search airfares, hotels, and rental cars here. Thanks!