Berlin’s New Airport: Finally, Ready For Take Off in October 2020

The year 2020 will mark the opening of the new Berlin Brandenburg Airport “Willy Brandt”, which will replace Berlin Tegel Airport and reintroduce Berlin a gateway for travel around the world.  Tegel the airport currently serving Berlin will officially close on Nov 8, 2020.

The new airport acronym will be BER.

This massive airport project was once thought to open by 2010, and now delay after delay has moved up the opening date to October 31, 2020. Berlin Schönefeld airport will become part of BER.

It is located 18 km, 11 miles southeast of Berlin in the state of Brandenburg, near the town of Schönefeld.  The new airport will also be named for the popular former German chancellor Willy Brandt.

Passenger safety is of paramount importance at BER airport. As of August 20, 2020, all passengers arriving from high-risk areas have to undergo a free COVID test within 72 hours and isolate in a private environment until the results arrive. At the airport, all passengers are required to adhere to RKI (Robert Koch-Institute) guidelines and official government recommendations to contain the virus.

These can be found in hygiene protocols and include keeping at least six-foot distance, wearing a mask, and washing / sanitizing their hands regularly. In addition to that, it is recommended that all passengers inform themselves regularly about new measures taken by German officials. 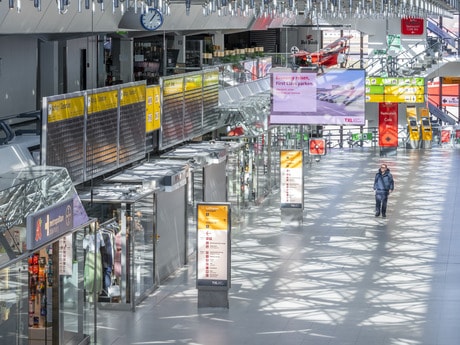 Everyone Excited about the New Airport

The Berlin Wall fell in 1989 and the German Unification Treaty was signed in 1990.

Burkhard Kieker, CEO of VisitBerlin, the city’s tourism and convention bureau said, “We say it’s one of the last missing jigsaw puzzle pieces in the resurrection of Berlin as an international megacity.”

Using Actor/Extras to Test out BER

Nine thousand nine-hundred extras have already tested out BER.  The airport has undergone all preparations for successful commissioning. All processes have been tested extensively and the airport is fully prepared for its October 31 opening.

In June, around 400 extras a day took part.  Roughly 120 employees from the logistics team coordinated the extras, luggage and catering. During 27 trial days, a total of 24,000 employees and 9,897 extras got to know BER. Around 17,000 pieces of prop luggage and 54,000 flight bookings for 2350 flights all contributed to a realistic airport experience.

With a host of sleek ultra-modern buildings equipped with eco-friendly infrastructure and state-of-the-art runways, the new airport in Berlin rivals the grandeur of any preexisting transportation hub. However, innovation doesn’t come cheap.

With the capacity to accommodate up to 45 million passengers a year, Berlin Brandenburg Airport will boast six floors and two parallel runways, which can be operated either independently or simultaneously.

Passengers will find a slew of both domestic and intercontinental flights under the same roof.

The innovative airport above ground is matched by state-of-the-art infrastructure below ground. A bustling subway system directly below the main airport terminal will ensure that the new airport is easily accessible from all directions.

It is connected to the rail and road network and can be reached from Berlin’s center in about 30 minutes. After opening up, up to 14 trains per hour will be available for passengers.

Deutsche Bahn (DB) has integrated the BER airport into its current network and is already offering the first long-distance rail connections.

Directly in front of the main terminal are vast new parking lots with the capacity to accommodate 10,000 vehicles. For hundreds of thousands of Berliners, perhaps the most important upgrade is BER’s strategic relocation of air traffic to the outskirts of the city, which will seriously reduce air traffic noise and disturbance for city residents.

In today’s eco-sensitive society, even the most stunning engineering accomplishments can go uncelebrated in light of negative environmental impact. Luckily for BER, architects and ecologists have collaborated to achieve a simultaneously modern and green airport.

“They built the new airport completely from scratch.” Says Kirsten Schmidt, a representative for visitBerlin,  “It is very much modern, state-of-the-art and eco-friendly, and the architects tried to incorporate as many green energy recycling methods as possible.”

Indeed, Berlin Brandenburg Airport’s spacious grounds have been splashed with islands of newly planted flora. Approximately 1,300 new trees have been planted on-site, and ecologists have ensured that for every tree felled during construction, a new tree seed has been sewn.

Prior to construction, the city-sponsored a massive relocation of amphibians and bats. Thousands of garlic toads, moor frogs, and other amphibians were relocated to newly built replacement ponds and streams nearby. The surrounding water sources were granted special safety measures, protecting them from waste contamination.

In addition to the airport complex itself, ecologists successfully stressed the protection of the environments below and around the airport, which have been altered by new roads and subway infrastructure.

An investment as massive as BER required smart planning from the get-go. Investors in this project have long stressed the incorporation of environmentally friendly design the use of renewable energy. In light of this, engineers worked to ensure that individual buildings and structures achieve optimum energy consumption levels.

BER will meet a full half of its electricity requirements with energy derived from entirely renewable sources, and the result will be a 50 percent drop in CO2 emissions. An example of Brandenburg’s innovative green engineering is featured in the main terminal’s air conditioning, which will operate by circulating the cool air generated from drinking water and introduced through an on-site geothermal plant.

By adopting environmentally-friendly measures and adhering to green design, the Berlin Brandenburg Airport has successfully disassociated itself with many of the negative environmental stigmas attributed to airport operations.

The Berlin Brandenburg Airport will replace three preexisting airports. The first to be replaced was Tempelhof, which was decommissioned in 2008. With the opening of the new airport, Schonefeld will be incorporated into BER and Tegel to close on November 8, 2020.

Instead of wiping Tegel Airport off the map, the city of Berlin has decided to transform the complex into a research facility and a hub for urban technologies, and offer space for 2500 students of the Berlin Beuth University. Already rich in history from World War II, it seems only fitting that the Tegel complex should have a further role in advancing the future.

However, by now Berliners should be accustomed to the reintroduction of old airports into their busy lives. The move to compound Tegel into an innovation hub is preceded by a similarly unconventional renovation at Tempelhof. When Tempelhof was decommissioned in 2008, the city pursued the development of a massive city park. Now, just two kilometers from the center of Berlin, thousands of people regularly congregate to barbeque, roller-skate, ride bikes, and sunbathe.

A virtual oasis in a sea of residential and commercial buildings, the new city park provides Berliners with a place close to home where they can unwind and recreate. The complex, which had been off-limits to civilians for over a century, is now speckled with picnic blankets and high-flying kites.

“The whole Tempelhof complex is a historic site,” says Schmidt, “And it’s great that the city has turned it over to the Berliners. Every day they are planting more trees and flowerbeds, but general recreation isn’t all the complex is used for.

The city frequently hosts concerts, fairs, and other events, using historic Tempelhof as the venue.”

For everyday use entrance to the park is free, and the city opens the gates between 6 am and sunset.

The success of Tempelhof as a venue and recreational park has spurred the city to invest further. events.