Visiting Berlin: Balm for the Soul

“Berlin?” asks my Mutti, the German equivalent to ‘Mother’ in English, “why would you want to visit Berlin?” In Mutti’s minds eye, this German capital is still synonymous with barbed wire, food shortages, wire-tapping and the Stasi police.

Mutti was born at the height of WWII, on the border between Germany and Russia and having never been back, as far as she knows, nothing has changed. But change it has. After nearly a quarter of a century since the iron curtain fell, Berlin is like balm for the soul. It’s a place of peace and prosperity, arts and community and paint – lots and lots of paint.

I start my wanderings unpacking at a fabulous lifestyle hotel called nhow. The lobby, bar and restaurant are all pink, an outrageous runway model kind-of-pink. The hotel concierge offers me a pink electric guitar, pink bathrobe and pink toothbrush – playful aesthetics that put me right at ease.

Once divided by the Berlin Wall, I’m in the creative nexus called the Friedrichshain-Kreuzberg district. My spread overlooks the River Spree with glimpses of the Oberbaumbrucke Bridge and a Stadtstrand beach bar on the opposite bank. It’s the perfect location to sip a signature cocktail from a funky beanbag chair.

I peak out the back patio where my present thoughts come face-to-face with the past itself – segments of the original Berliner Mauer or Berlin Wall.

The Past Meets the Present

The city was divided on August 13, 1961 by the construction of 87-miles of reinforced concrete slabs, watchtowers and bunkers. Each gray slab weighed in at approximately three tons and stood 12-feet tall. Today you can’t describe the Berlin Wall or the city in general without mentioning graffiti.

Most of it is political and it’s as important to the heritage of Berlin as the museums, memorials and historical sites. To mark the 50th anniversary of the commencement of the building of the Wall, nhow hotel transformed their back yard into Freedom Park.

The temporary exhibition includes sections from the former border between Brandenburger Tor and Potsdamer Platz. Symbols of unity – doves, rainbow prisms and even President Obama’s face mask the scars of the past..

Just a block up the street from the nhow hotel is the longest section of the Berlin Wall, the East Side Gallery Memorial. 106 urban paintings canvas the entire one-mile stretch.

The most famous painting is the recreation of a photograph taken in 1979 with the Secretary of the Socialist Unity Party, Erich Honescker passionately kissing Soviet leader, Leonid Brezhev. The ‘tongue-in-cheek’ satire is called “My God, Help Me to Survive This Deadly Love.”

In any other city, a bombed-out soap factory on a weedy lot that discourages advertising would be a recipe for disaster. But, try as they might to keep Kater Holzig a secret only among the alternative scene, word gets out to the masses. It turns out that this restaurant is a cultural playground flush with a theater, a mock beach and dance lounge.

I follow the crowd up three flights of gritty stairs to a quirky open-kitchen concept hotspot. There are warnings against photography but the ‘cool factor’ of this dilapidated warehouse is too much for me to resist. After a lengthy 4-

course dinner that includes a fennel salad, confit olive tapenade, braised wild boar, dumplings and chestnut strudel it’s a lot easier going down stairs than coming up. Half looped up on liquor and heading for the exit I completely forget the critical photo policy.

Out of nowhere an angry guard grabs my arm and demands I empty my digital camera card. Berlin thrives on individuality and creative expression.

Once considered vandalism, art in the form of graffiti or tagging is now encouraged. But take a commercial photo for an internet travel article and the subculture revolts. The contradiction baffles me.

The next day I head straight to the museums for answers. You can literally spend every day of the year inside a different museum in Berlin so choose wisely. On display at the Allied Museum are the CIA and SIS (British Secret Service) ´Spy Tunnel´, the guardhouse of Checkpoint Charlie from Friedrichstrasse and a British “Hastings” airplane used for reconnaissance. I’m surrounded by a sordid history that puts Berlin’s complex chronology in better perspective.

I make a necessary stop at the Berlin Wall Documentation Center, then the mothballed Templehof Park; the former airport for the famous Berlin Airlift and finally, the interactive Story of Berlin Museum. This is how you pay proper deference to Berlin. Before you take photos you learn acronyms like GDR (German Democratic Republic), FRG (Federal Republic of Germany), NPA or NVA (National People’s Army) and SED (Socialist Unity Party of Germany). My head is swimming with history but I’m finally coming to terms with what haunts Mutti and understanding Berlin’s complexities.

Of the 12 districts in Berlin I’ve barely scratched the surface of two of them. I only have one day left to pull together an analysis of Berlin and assure Mutti she has nothing to fear. I decide to go visit a small farmers market for further investigation. The tasty-smelling Kollwitzplatz Market is in the gentrified Mitte District home to a working class family population. There are leafy playgrounds and Bauhaus schools and it’s an intellectually stimulating district for thought and meditation. On the corner I spot a grocery cart full of free flowers and a makeshift stall giving away used but still wearable clothing.

“The baby population is exploding in this section of Berlin” says my Visit Berlin travel guide Nicole Robel. Nicole confesses she lives here and loves the vibe and atmosphere of her trendy neighborhood. 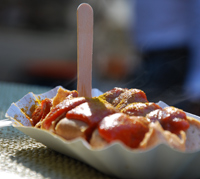 We stroll the market sampling a slew of Berlin favorites like Marzipan, fresh Brötchen and a venerable sausage creation called currywurst. I think the currywurst is an acquired taste.

There are narrow streets to explore with high-end dress shops and boutique galleries to pine over. And, like the Friedrichshain-Kreuzberg district and perhaps all districts, the ever-present political tagging permeates vacant buildings, street signs and sidewalks.

A girl can’t live on retail therapy alone so as my stomach growl louder a familiar inverted “M” icon catches my eye. The menu lists ‘supersize’ and ‘take out’ but this eatery, the W * Der Imbiss is clearly the antithesis of McDonalds. I share several tall glasses of wheat grass and two naan pizzas with Nicole. One with olive paste, sundried tomatoes and arugula and the other with artichokes and chilies. We dine al fresco watching mommies push baby strollers and students rush to class.

In the evening, I’m back to my carnivore ways sharing dinner with friends at the Gugelhof. If it’s glamorous enough for German Chancellor Schröder to take US President Clinton out to dinner here, well, then, it’s good enough for me. My cholesterol count jumps several notches as I plow through their most popular fondue dish.

The Clarchens Ballhaus is a 1913 school dancehall with an upstairs Mirror salon and a downstairs swing floor. By the time I arrive from Gugelhof it’s 10p on a Sunday evening and there’s just one romantic couple on the dance floor. It’s too late to see a show at the Hackensche Hofe Filmtheater so we take photos of the Brandenburg Gate, wet from a soft rain and lit up nicely.

It’s my last evening in Berlin and after the Kater Holzig anomaly nobody tried to confiscate my camera. Like the beloved Trebant vehicles and little Ampelmännchen traffic lights, perhaps the altercation was just a leftover gesture from East Berlin times. Either way, nothing should deter anyone from visiting Berlin and given the size of the city, it will take more than one visit.