Seeing the Underground Art in Berlin Is Worth the Trip

Berlin is a dynamic, progressive city, and the local art scene reflects its unique history and colorful present. From painters to performance artists, the Berlin art scene is home to some of the most innovative figures on the international stage.

Numerous artists from across the globe have taken full advantage of Berlin’s transition period throughout the 1990s and 2000s to find gallery and performance spaces in the most unexpected places.

“I think there is both a sense of personal freedom and rebellion,” she says. “due to the historical and not-too-distant past of the city. The Wall has fallen, and along with it, barriers to creativity and self-expression.

“Rebellion comes from a youth culture that does not have great employment prospects (especially in Berlin, which is notoriously poor with respect to all other German cities and has high unemployment.) Thus, you see a lot of people making their own way, across all parts of the income spectrum.”

Berlin’s local government is committed to funding individual artists and collectives. There are 18 “Berliner Grants” given to artists residing in Berlin artists each year for 10,000 Euros. Hauptstadtkulturfonds (state culture funds) are large, project-based grants awarded once a year.

American artists working in Berlin can benefit from the American Academy in Berlin’s paid residency program. In addition, many private institutions invite artists to participate in year-long artist-in-residence programs.

As a result of this governmental support for the arts and the city’s financial accessibility in general, Berlin is the ideal place to begin one’s career or thrive as an established artist.

According to Madeline Stillwell, an American performance and installation artist who lives and works in Berlin, “Berlin is cheaper to live than most big cities today — I think Philadelphia and Detroit are the only cities in the US that compete financially with Berlin’s low rents — so artists have more time to put creative energy toward their visions, and they can take the financial risks that are necessary when making art, i.e. starting projects or showing their work in a new space.”

Because of the fact they can live cheaply and have more free time, artists in Berlin tend to be very active. There are multiple openings nearly every night in Berlin, and most people find out about them via word of mouth or social media such as Facebook.

Openings and gatherings at bars are the main places for artists to network. Stillwell finds the Berlin art scene to be refreshing because it is “more International, and less hierarchical, than, say, New York.

There are a variety of privately and state-funded museums in Berlin, and it is typically very easy to find tourist information on them (including Pergamon, Alte/Neue Museums, Neue National Galerie, Hamburger Bahnhof, Gemalde Galerie, Temporary Kunst Halle, and the Deutsch Guggenheim).

Grassroots artist collectives are not quite as publicized in tourist books and pamphlets, but once you ask, almost any Berliner can tell you where to go.

One of the largest underground arts centers is Kunsthaus Tacheles is a growing complex located in a five-story building containing galleries, screening rooms, installation spaces, workshops, cafes, and bars.

Tacheles is a Yiddish word meaning “to disclose, to reveal, or to speak clearly.” The area was given this name by Jewish residents of former East Berlin. The Tacheles building was originally a shopping mall built at the turn of the 20th century. The massive structure was badly damaged during World War II.

In 1990, shortly after the fall of the Berlin Wall, a group of international artists occupied the building and the Tacheles arts center was born.

Both emerging and experienced artists flock to The Raw Tempel in Friedrichshain, a former railroad works and now a large arts complex that brings together music, theater, drinking and politics. The complex is comprised of four buildings that host visual and performance art, handiwork (musical instrument building, wood, metalwork), a variety of concerts, lectures and social activities.

Kunstlerhaus Bethanien, located in a former hospital in Mariannenplatz, welcomes artists-in-residence from all over the world to give workshops, lectures, and shows. The organization is extremely selective in its choice of artists to fill its 25 studio spaces.

Most individual galleries are located throughout Kreuzberg, Prenzlauer Berg, and Friedrichshain Mitte, Charlottenburg, Kochstrasse, Heidestrasse and new spaces are constantly popping up around the city.

“Small galleries are everywhere,” Vos explains. “This city isn’t limited to big-name arts scene, but rather is full of little names contributing to the big, creative, picture. I would describe the city as pulsing with creativity; it is young and edgy, with some grunge.”

Madeline Stillwell is an American artist who has made Berlin her home. She holds a BA in art from St. Olaf College (Minnesota) and a MFA from Cranbrook Academy of Art (Michigan). She is an installation performance artist who frequently works with materials found on-site.

Many of her pieces involve her burying or cocooning herself in found objects or waste and then slowly digging her way out. She also integrates looped film clips, which gives her work a meditative, ambient quality.

Stillwell has given myriad screenings and lectures throughout Europe and the U.S. Photographic images of her work can be found in Berlin’s Wilde Gallery.

Like many of her ex-pat counterparts, Madeline is incredibly active in the Berlin art community. When asked to describe the advantages of the arts scene in Berlin, she commented:

“Time happens much more fluidly than anywhere I’ve been in the US. People linger at such events and galleries often stay open for as long as the party insists. People mingle and converse from overlapping parts of the art world — artists, curators, dealers, and gallerists can quite often all be at the same party.

“And clubs, bars, and real estate developers all want to have art events in their spaces because it increases the traffic and the value of such spaces. So there is a lot of crossover happening between where art is seen/experienced outside of just the gallery setting.

“If you are an emerging artist it is not difficult to start conversations with anyone about what you are doing in Berlin. This allows for an intuitive flow of social networking.” 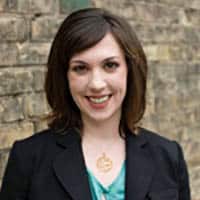 Jen Westmoreland Bouchard is a travel writer based in Minneapolis, Minnesota, and owner of a boutique writing, editing and translation agency, Lucidité Writing, LLC.