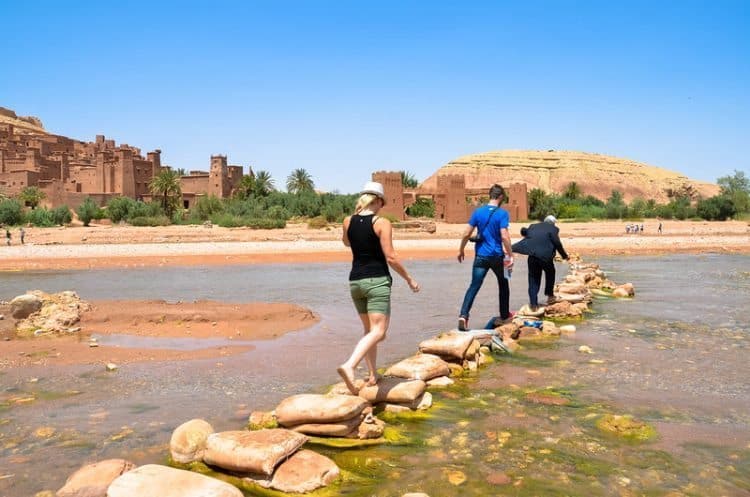 “You’re taking your child where?! Are you crazy?”

That was the astonished reaction of just about everyone I told about my plan to take my 10-year old son on vacation to Morocco. Their eyes would widen and I could tell they were concerned for both our safety and our sanity. But they didn’t know the secret of Moroccans and children.

Everywhere he went in these crowded, bustling cities of Morocco, people of all ages spoke kindly to him, took him by the hand and treated him as if he were one of their own children.

This was astonishing to both him and me, but it soon became clear that Moroccans treasure children more than any caravan gold.

Children — all children — are blessings, and a foreign child is no different than any other. It also became obvious that by traveling with a child in Morocco, I was treated with more respect.

Instead of being harassed or ogled, as had been my past solo experience, I was protected, catered to, and bowed to.

In other words, I was not viewed as an “available” single female (the way most non-male-accompanied Western women are viewed, married or not), but as a Mother, which is inviolable in Muslim culture.

Nowhere was our experience more dramatic than in the desert areas. In almost every village we explored, Oliver was invited to play soccer with the local boys while I drank tea with their mothers.

During breaks, the children would ask him about American movies and demand to receive English lessons, but even with the language barrier, I would look over to find them rolling in the sand and dirt, laughing and smiling like they understood each other perfectly.

Meanwhile, the women and I compared notes about marriage, sex, and childrearing, as well as our hopes for the future of our children and for ourselves. Surprisingly, we shared many of the same experiences and expectations.

But the real highlight was the three-day camel trek we took in the dunes of Erg Chebbi. Oliver had never ridden a camel before but took to it like a real Tuareg. He was king of all he could survey from his high perch: with his turban tied around his head, he was Aladdin and Ali Baba, a powerful sheik and Lawrence of Arabia.

When we made camp, he joined our young guides to climb the dunes and sandboard down them. He marveled at the changing colors of the dunes at sunset. His eyes sparkled as we told stories around the campfire and counted the brilliant stars at night.

And even when we made him wake up at dawn to watch the sunrise over the desert, he was enthusiastic and thrilled. Our guides also taught him how to care for his camel, how to saddle her and how to milk her. They even offered to sell her to him, and I was tempted to agree!

Of course, there were days he was too tired to do much sightseeing, and times he begged for ice cream and his Nintendo, but most of the time, he had more energy and exploratory verve than I did.

When my feet ached from wandering the souks, he pushed me around the next corner only to discover some treasure I never would have found had we turned around.

My son has been the best at convincing all our dubious friends and relatives about the safety and fun of traveling en famille in North Africa. He still talks about the experience and can’t wait to return. In fact, we are already planning another North African family adventure, this time to the pyramids of Egypt and the beaches and troglodyte villages of Tunisia: he is already training hard for those village soccer matches.