“Keep Portland Weird,” read the bumper sticker affixed to the taxicab that we hailed at the Portland, Oregon, Amtrak station.

I wondered what exactly that might mean as I tossed our bags in the trunk and asked our driver to whisk us to the Hotel Monaco, reservations having been arranged only minutes before by my friend, Captain James T. Kirk, formerly of Star Fleet Command, but now, chief pitchman for Priceline.com.

The decision to come to Portland had been a quick and spontaneous one, inspired by a lack of affordable, last-minute flights out of Vancouver, British Columbia. Internet research suggested that Portland might be a good alternative, but how to get there?

Following some local advice we hopped on Amtrak’s train number 509, the Cascades. To our surprise, the Cascades, a joint rail venture between Amtrak and the transportation departments of Washington and Oregon proved to be a rail journey approaching European standards – clean, comfortable, and surprisingly fast.

On the train ride down the coast I tried to imagine what Portland would be like.

Gazing out the window at majestic Mount Hood, illuminated in the late afternoon sun, I reminded myself that Portland is a West Coast town, and settled on the notion that it would be something like Seattle. “Yes, it’s probably just like Seattle.”

Our first impression of Portland was her railway station. As a frequent guest of Amtrak I’ve come to expect utilitarian but uninspiring depots. Portland’s Union Station is the polished marble and varnished oak exception to that rule.

Exuding all the elegance of a rail station from my grandfather’s era, the depot made me decide that Portland must be a city of restored, historic elegance, like, say, Boston.

Now, this odd bumper sticker, along with the bohemian appearance of the cabbie, had evoked a new thought – maybe it’s more like San Francisco, or maybe even Boulder.

Seasoned traveler that I am, I should know that comparing cities is totally unfair, and ultimately disappointing. They are as unique as snowflakes, as I was about to be reminded once more.

“So what’s Portland all about?” I asked, knowing that cabbies are always intimately in-tune with the towns they serve, and also that as a group, cabbies are brutally honest, not prone to the pulling of punches, or mincing of words.

“It’s a city of neighborhoods,” he said. Then pointing in every direction, he named all those neighborhoods in a quick cadence that I was scarcely able to digest: Downtown, Chinatown, Old Town, Alberta, The Pearl District, Broadway, and Hawthorne.

I tried to keep up, but couldn’t. “Now, Downtown – that’s where you’re staying – is what us locals call, ‘the city’s living room,’” he concluded.

I noticed that the “city’s living room” appeared to be hosting quite a number of vagrants on this particular evening.

The strange thing was, when I mentioned this observation to the cabbie, he actually bragged about it! He explained that Portland does indeed harbor the homeless, and proudly proclaimed that his city has over 20 public shelters and even more feeding stations.

“The homeless are not perceived as a threat here,” he stated. Then, sensing our skepticism, he assured us that downtown was a safe neighborhood by adding confidently, “Nothing to worry about.”

“That’s weird…,” I muttered under my breath, and then remembered the bumper sticker.

The Hotel Monaco, once an abandoned department store, now brilliantly transformed into a lovely boutique hotel, spoke of the style and graciousness of a bygone era.

The Bell Captain, adorned in the traditional uniform of his position, greeted us warmly, secured our luggage, and directed us down the red-carpeted entryway into the lobby, framed with Grecian columns and furnished with plush, velvet couches reminiscent of the hotel’s namesake – Monaco.

It was easy to imagine Grace Kelly strolling through the room in all her classic elegance, past the portrait of Art… Art… the Director of Pet Relations!

Art is a large, lovable, Golden Retriever who indeed holds the title, Director of Pet Relations at the Hotel Monaco. Beneath his regal portrait, prominently displayed left of the reception desk, a pooch-shaped chalkboard lists the names of all four-legged guests in residence.

Admiring Art’s likeness in the ornate lobby, I thought about that bumper sticker, again…

As it turns out, Art’s presence at one of downtown Portland’s finest hotels is in fact quite Portland-esque. The city is extremely pet friendly, and it is almost unusual to see a Portlander who isn’t accompanied by a furry companion.

Next morning we struck out to explore this intriguing city. Now, should we rent a car? No, it isn’t necessary. Portland’s public transit system, Tri-Met, is the model of efficient, inexpensive, and green urban mass-transit.

Augmenting the downtown bus service, the Portland Streetcar, connects the south waterfront with Portland State University and the northwestern quadrant of the city.

MAX, Portland’s light rail system, joins the city’s many neighborhoods and also provides a fast, convenient link from downtown to the airport. The fourth tier in this amazing public transportation system is the WES commuter railway, linking more distant communities with the city.

MAX, The Streetcar, WES, and many of the inner-city busses are electrically powered, minimizing the system’s pollution footprint. All Tri-Met services accommodate bicycles – another widely embraced form of transportation – are handicapped accessible, and are of course, pet friendly.

After discovering how easy it is to get around, we wanted to see everything. But it was Saturday, and when it’s Saturday in Portland, everyone goes to the Saturday Market, located just off the riverfront in the Old Town neighborhood.

Begun in 1973 by two local artisans, Sheri Teasdale and Andrea Scharf, this weekly event has morphed from a simple sidewalk art show into a truly international exposition.

The food pavilion features delicacies from as far away as Africa, or as near as the Oregon coast. Musicians perform in every known genre, while artists display works in mediums and styles ranging from neo-classical, to impressionist, to, well… just plain weird.

From Old Town it’s a short walk to Chinatown through the imposing Chinatown Gate, a gift from Portland’s sister city, Kaohsiung, Taiwan. Chinatown, festive and colorful as it is today, holds a piece of Portland’s darker history, the Shanghai tunnels.

This underground labyrinth of rooms and passageways was once used to smuggle illegal immigrants, mostly Asian, destined to lives of indentured servitude in the United States.

Later, during prohibition, the tunnels furthered their shadowy reputation by facilitating Portland’s robust bootlegging industry. Today, the Shanghai tunnels remain a reliable source of revenue, as one of Portland’s most popular tourist attractions.

Noting our interest in abstract art, a lady at the Saturday Market suggested we visit the Alberta District. There’s an obscure line in an old Jimmy Buffet song that asks, “Where did all the hippies go?” Well, Jimmy, if you’re reading this…

Alberta Street is 18 blocks of coffee houses, head shops, and artist studios populated by the legendary flower children of yesteryear, their children, and their grand children. It’s a gentle street – you can literally feel the love.

A proliferation of ancient Volkswagens and Volvos, substantial enough to qualify as a classic auto show, makes it possible to imagine it is still 1970.

We stopped in at the old Alberta Street Rexall Drug Store, now a coffee house and bakery, where we listened to a three-piece string band serve up the finest bluegrass music west of the Appalachians, all for the price of a cup of coffee.

Conventional wisdom insists that Portland’s Pearl District is THE place to be on Saturday night. Unofficial sources claim the district has the largest concentration of micro breweries in the nation.

Try as we might, we couldn’t confirm that statistic, but we did find Powell’s, proclaimed to be the largest bookstore in the world.

Our day in Portland was almost over. We ended it back in Old Town, at Kell’s Irish Bar, where the weekly impromptu jam session of Irish musicians and dancers was showing all the signs of turning into a true all-night Celtic ceili.

Sorry we couldn’t stay, but we had to rise up early, bid goodbye to Art and the rest of the fine staff at the Hotel Monaco, and then catch MAX to the airport.

Nestled into seat 36-D, watching Portland disappear beneath a cloud deck, I thought once more of that bumper sticker, and weighed it against what I had learned about Portland, Oregon, in one brief evening, and one short Saturday.

I had discovered a city that actually welcomes the homeless, that thinks nothing of animals strolling through its downtown shops, that goes to great lengths to protect the environment, and strives to make daily life easier and richer for all its citizens.

Yeah, that is weird. 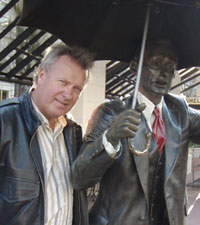 The article definitely entices the reader to plan a trip to Portland. I truly enjoyed it! Thank you!!! — Marilyn Majeau

www.gonomad.com
This article was last updated Nov 19, 2018 @ 1:43 pm
If we've inspired you to travel with this story, why not check out the prices to get there and make it happen. Search airfares, hotels, and rental cars here. Thanks!