Luxembourg: Right In The Middle Of Europe

From its central location, one would think that Luxembourg would be the perfect jumping off point for visitors to Western Europe.

To the west is France, to the north Belgium and The Netherlands, to the east is Germany, and south through the beautiful countryside of France lies Switzerland and then Italy.

But somehow, Paris, Frankfurt, and Amsterdam became the main points of entry into Western Europe, and quite honestly, not too many people make Luxembourg a consideration when planning their European holiday travel.

Getting to Luxembourg from all points in Europe is fairly simple. There are four major motorways that converge there, the A1 from the east, the A7 from the north, the A6 and A4 from the west, and the 13 from the south. And trains regularly visit Luxembourg from many other European cities, as well.

On my visits, I have stayed just outside of the central area of the city at the Hilton. During both of my visits to Luxembourg, I have enjoyed the best rates to be found for a Hilton property in a major city in Western Europe.

And along with that great rate is everything Hilton is generally known for — spacious and comfortable rooms, friendly staff, great breakfast buffet, nice amenities, and free parking on top of all that.

To get where all the action is, you make the short five-minute drive there and park in one of the many reasonable priced underground garages they have. All day will cost you well under 10 Euros. 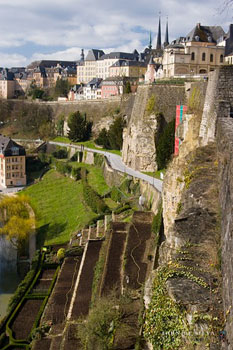 Alternatively, you can take a city bus that runs between the Hilton and the city center. A few Euros round trip and you are at either destination in no time. Just be mindful of the bus times and when they stop running. If you do want to stay late, a taxi wouldn’t be too expensive to take back to the hotel.

The Restaurant Le Rabelais at 4 pl. d’Armes was a nice place to pop into out of a rain shower and grab a bite to eat or a nice, warming drink on a chilly day. They specialize in French cuisine, and the menu and atmosphere make for an enjoyable experience.

This is equally true for Restaurant L’Academie, which is found almost directly across the street. German and French cuisine is the fare here.

We actually enjoyed a little drama with our dinner one evening at L’Academie. A server dropped some plates near our table, and as they crashed down to the floor, oil splashed up and onto my wife’s clothing. And the play began!

Apologies came from the server and then the woman who appeared to be the manager. We were given a free dessert each, and my wife assured all concerned that it was an unfortunate accident and everything would be fine. However, the manager continued to admonish the waiter, who would mutter quietly from time to time.
The many layers of Luxembourg

She would go back to her position to survey the tables, glancing un-approvingly at him from time to time, and muttering to those around her in French. Finally, she said one too many things to the server, and he ripped off a few moments of what I think were several carefully chosen French compliments regarding her fine managing style.

We didn’t see him after this exchange, so we asked another server, for fear he had been terminated. We were told he had been sent upstairs to serve guests there. Apparently their version of “timeout” for the serving staff!

On our way out of the restaurant we saw him, and thanked him and gave him a heart-felt “good night” as the curtain closed on our entertainment for the evening. A great experience all around in these two dining establishments, and one that is especially memorable.

Also in the center, there are shops of all kind; some selling numerous types of products while others choose to specialize like the one in the picture. Just enjoy a leisurely stroll down the streets and enter as you please. There are many to engage your interest.

One of the unique sights found in any European city lies here in Luxembourg, the Casemates. These are underground tunnels and rooms dating back many centuries. After paying a very reasonable entry fee, you will pass an area that may be called a museum. It touches on the history and construction of the casemates using small models of the underground fortress.

Much of it has been destroyed in recent times, but what does remain has been designated by UNESCO as a World Heritage Site. Be aware that there are parts of the Casemates that are dark and cramped, especially the spiral staircases that are dispersed here and there to gain access to different levels.

Lighting is ample throughout, but it’s not overpowering, most likely to keep the feel of what this place actually is, a manmade network of caves and rooms.

There are places along the outside wall that have window openings, affording a view of the city below. Consider these your “photographic points”, as people gather with their cameras, jockeying for position on busy days. It is also quite cool inside, even when it’s warm outside, so consider that if you visit in the summer.

Luxembourg is a city that is very easy to walk. It is small, dense, and compact like Amsterdam or Prague, but quite varied in the “feel” one experiences in different regions of the city. There are new and old sections of town, and they are easily discernable, as you have to cross a bridge that joins the two.

And down below the bridge, a lovely green area provides walkways, a small stream, and points of interest to enjoy on a casual stroll. Runners and exercise buffs will be seen making the rounds throughout the day as they work on their fitness.

As you walk you will encounter churches and cathedrals, beautiful architecture in government and municipal buildings, sculptures, squares, and charming alleyways.

For convenience, there’s an elevator that goes from the upper level down to the lower level of the city. Numerous signs point your way to its location as well as other points of interest in the city area.

Luxembourg is the New Dixieland

In March through May, Luxembourg hosts a jazz and world music festival named Printemps Musical – Festival De Luxembourg. During my visit there were several American Dixieland music groups and a Dixieland Choir performing on a covered stage set up in the middle of a square.

It was a fantastic surprise, as it was not known to us beforehand that this was taking place. The weather may have been on the dreary side, but the music flowed down through the streets and out across the city lifting spirits and infusing energy into all.

Luckily, we caught this event at the right time. But too often, surprises come in the form of missing something of value by just a few days. Knowing as much about a destination as possible will help eliminate most of these unpleasant occurrences. A great site to visit concerning a trip to. There you will find a host of information that covers the entire year, helping you to make an informed decision about the timing of your visit. 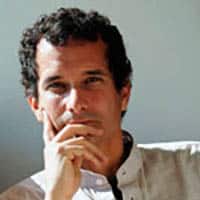 John De Silva alternates between Amsterdam, The Netherlands, and Orlando, Florida. A professional photographer who attended the Southeast Center for Photographic Studies, he works in commercial, editorial, travel, portraiture, and wedding photography. He currently is the associate editor for ACCESS Magazine, distributed quarterly in The Hague, Rotterdam, and Amsterdam, and also contributes articles and photography. He teaches and travels as often as possible. Visit his website, is johndesilvaphotography.com.