Mérida, Mexico: Living the Day of the Dead

Hanal Pixán in Mérida – Bringing Back the Souls of the Dead

Mexico’s Day of the Dead celebrations has always piqued my curiosity. Knowing this holiday is meant to bring back the souls of the dead for a visit with their loved ones is a peculiar concept for me.

I needed to know more. When the opportunity to experience this event first-hand fell into my lap, my bags were packed.

Home base for five days was the historical capital of the Yucatán Peninsula, Mérida. The official holiday takes place from October 31 to November 2 but deviates to some degree depending on the location.

The last day of October honors children, followed by November 1 commemorating adults. On the final day, all the deceased are celebrated.

One of the local guides I met shed some light on the Maya beliefs that date back 3,000 years.  This civilization believed death wasn’t the end of one’s soul but rather a natural stage leading to a new cycle of life.

When a person died, their Pixán (soul) traveled to the underworld, consisting of nine levels.

There were challenges, sometimes dangerous, as the soul passed through the levels during a four-year period. Then the soul would transition to the thirteen levels of heaven, their final resting place. The families of the deceased helped them on their journey by providing food and water in the form of offerings.

Ofrendas of the Maya

Each of Mexico’s 31 states has unique ways of commemorating this holiday. In the Yucatán peninsula, historically the central location of the Maya civilization, The Day of the Dead is known as Hanal Pixán, which translates to “food of the soul.” At the core of the celebrations are ofrendas (alters) set up by families in their homes or at grave sites.

Ofrendas are filled with a mix of candles, flowers (typically marigolds), food, drink, maybe a loved one’s favorite food or a child’s toy, and photos of the deceased. These offerings are intended to make the journey easier for the departed souls.

Festival of Souls in Mérida

In Mérida, the festivities stretch out for eight days, starting October 24, with the Festival de las Ánimas, Festival of Souls. The most impressive event was the Parade of the Souls, which takes place on Friday night.

Crowds of onlookers, including myself, made our way from Merida’s La Ermita neighborhood to the cemetery, a distance of roughly two miles.

We watched as hundreds of parade participants lined up for the walk back to La Ermita. The men and boys were dressed in white, while the women and girls wore white dresses, many trimmed in colorful embroidery.  All were carrying candles, and most had faces painted to resemble skeletons. The scene was eerily beautiful.

Getting Into the Day of the Dead Spirit

Lining the parade route were homes with alters in plain view and several families offering food for sale. Getting into the spirit of the festival, I went full-on with skeleton face paint, a service provided by the locals in the La Ermita neighborhood. For a mere two dollars, I took on the appearance of the walking dead! The scene was jam-packed.

Thousands lined the parade route and then fell in line behind the participants as they walked back to the plaza. Music filled the skies, loud enough to wake the dead. Social distancing was a nonissue as our group of five gingerly picked our way through the masses, careful not to run over little kids or strollers. 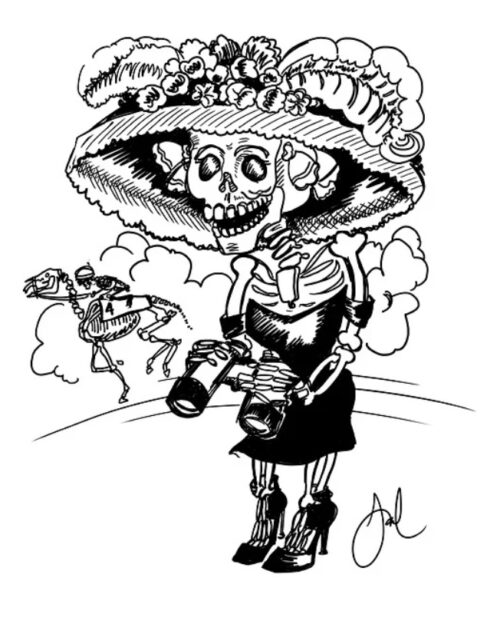 New to the festival this year was a second parade on Saturday night, Catrina’s Parade, with the action, starting in Plaza Grande well after dark. I had no idea who Catrina was, so I did some homework.

This night was a showcase for stunning attire, with women sporting lavish costumes, some with flamboyant hats, and some with flower bouquets in their hair.

The painted faces were more ornate, including a few embellished with jewels. As the parade moved through the streets, there was jubilant music and dancing among the participants. Even my two left feet were doing a bit of toe-tapping.

Monday brought more festivities, this time on a stage in Plaza Grande with a historical, beautifully choreographed dance performance known as La Vaqueria. The original purpose behind this folklore dance was to honor the patron saint of either a hacienda or a Yucatan village.

Today, visitors to Mérida can witness a traditional Vaqueria on Sunday and Monday in front of Palacio Municipal. Sponsored by the local town hall, it’s a splendid way the city keeps traditions alive year-round for the enjoyment of locals and visitors alike.

During the Festival de las Ánimas, there are several activities beyond the parades, music, and dancing to make for a highly spirited week, including ghost tours, bike rides, storytelling, Maya ball games, showings of Disney’s Coco movie, and arts and crafts for sale.

A much anticipated culinary tradition with Hanal Pixán is the preparation and serving of muchilpollos, commonly called pibes. Pibes start with slow-cooked chicken or pork, flavored with spices. The meat is encased in masa (corn dough), and then wrapped in banana leaves.

The mixture is buried in an underground pit heated by hot stones and allowed to cook for several hours. Pibes frequently appear at family alters to help nourish the souls of the deceased.  Pan de Muerto (Bread of the Dead) also makes an appearance during Hanal Pixán. This sweet bread, shaped like a bun, is customarily decorated with bone-shaped pieces of dough.

Creepy Customs in the Yucatan

During Hanal Pixán, there are a handful of towns in Yucatan where the dead are exhumed after a few years, and the bones are cleaned by a gravedigger, removing any last traces of flesh.

To me, this tradition is unnerving, and I was glad it wasn’t on our agenda during our days in Mérida.

The manner in which Mexicans honor their dead is so different than what transpires in my circle of life. Occasionally, especially on Memorial Day, my custom is to bring flowers to the graves of my mom and dad.  It’s always a sorrowful time for me, reflecting on my loss.

My visit to Mérida revealed how joyful and festive Mexicans of Maya descent commemorate their deceased.

I so wished I could bring back the souls of my parents for a brief visit, but that is not my world.

Donnie Sexton’s visit to Mérida was sponsored by the Yucatan Tourism board, but the opinions are the author’s own.