It all moves slowly here. And that’s just how the islanders want it.

Even the famous who own homes here do so because of the anonymity this remote destination on the coast of South Carolina provides.

Daufuskie Island, situated between Hilton Head and Savannah covers just 9.61 square miles and is accessible only by boat. It is also the southernmost inhabited point of South Carolina.

We decided to day trip to this remote barrier island during our stay on Hilton Head Island and are we ever glad we did. Though visitors can hop a ferry from Hilton Head or Savannah, the ideal way to get to know the island is by a guided tour from a local who knows the island best.

Once on Daufuskie Island, we jumped into our golf carts and began exploring the fascinating history, art, culture, and ecology of this intriguing isle.

Daufuskie has only 400 permanent residents. Most roads are unpaved. There are few cars and no sidewalks, street lights, town center, stores, or mail delivery. But there are thousands of ancient live oaks draped with Spanish moss.

Residents must ferry to Hilton Head to grocery shop and gather their mail. The island didn’t even get phone service until the early 1970s.

But it’s the rustic uniqueness and undeveloped lifestyle that makes Daufuskie such a fascinating place.

We knew that having a knowledgeable guide makes all the difference when visiting the island.

Our expert not only knew the island, he knew the historic sites, the people, and their fascinating stories. And this made for one great experience.

In the 1700s, Daufuskie was once home to the Yemassee and other native coastal tribes. Multiple skirmishes occurred on one end of the island as European colonists established control of Daufuskie. So much blood was shed that the battled area and its reddened water have ever since been called Bloody Point. 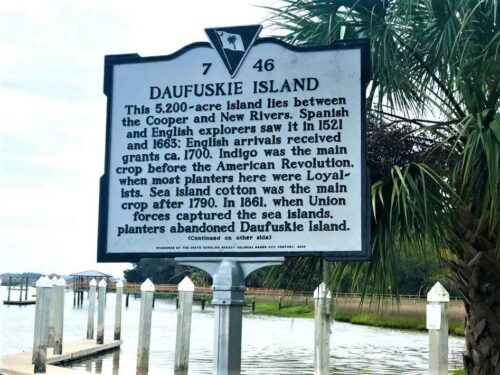 Under British rule, plantations were developed, growing indigo and Sea Island cotton. Slaves tilled the fields while plantation owners and their families spent most of the year off the island.

The slaves’ isolation helped to promote and foster the retention of their African culture and language. These descendants of former slaves known as the Gullah are a unique Lowcountry African-American people.

Plantation owners and many slaves fled the island at the start of the Civil War. After the war, the Gullah population of freed slaves returned to the island and worked for landowners or purchased their own small plots. They built homes, schools, and churches. Daufuskie Island’s population peaked at about 3,000 residents by 1900.

When the boll weevil destroyed the island’s cotton crop in the 1900s, it was the oysters that provided jobs for the Gullah population.

But pollution in the Savannah River closed the oyster beds in the 1950s and the island’s economy dramatically declined.

As a result, most of the Gullah began left the island for better opportunities.

The 1960s brought a famous author to Daufuskie by the name of Pat Conroy. As a fan of his many novels and movies set in the Lowcountry like Prince of Tides, I was eager to visit Mary Field School, built for the island’s black children. Conroy, a civil rights activist, was the first white teacher on the island.

Visiting the classroom he taught in now bedecked with photos of Conroy with his students was inspiring. This very school was immortalized in his novel The Water is Wide.

Gullah Culture of the Island

We instantly noticed that many of the Gullah homes were painted ‘haint blue.’ This color not only represents water but as our guide explained, the color serves as a protective talisman to keep out evil spirits called “haints.” The blue is painted on doors and shutters, and trees surrounding the home.

The Gullah believe evil spirits can escape their human forms, and come at night to paralyze, injure, or even kill innocent victims.

The color tricks the haints who believe they’ve stumbled into water (which they cannot cross) or the sky (which will only lead them farther from their intended victims). Even blue glass bottles are hung in trees to trap these malevolent marauders.

For more than 100 years, the Gullah have upheld their West African legacy through their cherished spirituality, music, and food traditions.

Even their composite European and African language is difficult for many to grasp. Our guide admitted it took him years to understand the Gullah of the island.

Their food traditions have given us much of the beloved Lowcountry cuisine we’ve come to enjoy— culinary jewels like shrimp and grits, red rice, gumbo, and Frogmore Stew (also known as a seafood boil).

Six Gullah cemeteries are scattered throughout the island, first established along the creeks for the burial of slaves during the plantation era. Gullah residents continued to be buried here until the late 20th century.

Most cemeteries were situated along the edge of a waterway because Gullahs believe the spirits can take to the waters leading them back to West Africa, their homeland.

A haunting revelation by our historian guide is that when investors began building homes on the island, they knowingly and purposely disrupted gravesites.

Despite the remaining Gullah locals attempts to forge some type of agreement, the developers proceeded with their plans.

An old Gullah woman placed a curse on the company. Whether you believe in this or not, it is a fact that despite corporate and other efforts to develop additional properties on the island, every endeavor since has ultimately failed.

Daufuskie arts and crafts are also distinctly African in spirit. During slavery times and the decades of isolation that followed, the Gullah produced a wide assortment of artifacts, many of which now in many South Carolina and Georgia museums.

Necessity is the mother of invention and their isolated existence required self-sufficiency. The Gullah grew their own food and fished the waters. They created pottery, calabash containers, grass baskets, drums, and handwoven blankets dyed with indigo.

The plants are still indigenous to the island. Many artisans on Daufuskie today collect scattered pottery pieces and other artifacts found buried throughout the island, to proudly embrace their heritage.

Artisan Crafts of the Island

What was so heartwarming for us was to see that many of the historic crafts of the island passed from generation to generation. These are still being created today using nature’s gifts.

Creativity Rooted on the Island

Daufuskie Island is home to a handful of talented artists who believe their creativity is rooted deep within this bridgeless island. To them, Daufuskie is a mystical, ancient abode with pristine beauty, a cultural and ecological awareness, and the place where indigo still grows wild.

Indigo was culturally significant to this area of the South for many years. Before the synthetic age of the late 1800s, the indigo flower was the only way to obtain blue dye. These blue dyes were rare and represented status and wealth.

It was a 16-year-old island girl named Eliza Lucas who first successfully cultivated indigo, and its culture, history, and mystique continue on Daufuskie to this day.

Old tales have long lives. Today many still believe to keep indigo “happy” it must be kept away from pregnant, menstruating women, and people who are depressed or suffering. Otherwise, the dye will never set.

A small organic company called Daufuskie Blues located in the historic Mary Field School created an indigo vat, combining organic indigo powder with fructose sources like bananas, honey, or henna. As the dye oxidizes in the air, it transforms into a deep, rich indigo blue. Using this dye, artisans here produce some of the most

beautiful patterns of clothing, jackets, and scarves we’ve ever seen.

The Iron Fish Gallery and Studio is located in a historic Gullah constructed house along a dirt road deep in a maritime forest.

Allen’s creations have been featured in top publications all throughout the U.S. His colorful fish, mermaids, sea turtles, crabs, lobsters, and stingray sculptures are fascinating.

And he’ll tell you he’s living his dream after trading in a stressful corporate life for what he really wanted: the simple life. You can find this on Daufuskie Island.

Allen and other island artisans work on a trust system. If an artist isn’t on the property, they just leave a note asking purchasers to leave money in an “honor box” or to just “slip a check under the door.”

Customers may also simply record their purchase in a guest log with their phone number for the artist to contact them for their credit card number. In all our travels, we’ve never encountered a system quite like this. And it works!

Ecology of the Island

Besides the sounds of golf carts hub-bubbling over dirt roads, the sounds of Daufuskie are sounds from the wildlife that live here. Sea turtles still lay their eggs on local beaches. Dolphins frolic in the waters of the bay.

Alligators and egrets can be found in teeming marshes. Rare fox squirrels race from tree to tree, and the melodious chirping of birds is everywhere.

Be forewarned to take bug spray, however, as gnats and mosquitos find Daufuskie a true paradise.

It’s also not unusual to encounter other local residents, namely snakes, including the rattlesnake. As our guide says “always watch where you walk, especially in grassy places. Them rattlers are everywhere.” He had pictures to prove it. Thankfully, however, we didn’t encounter any.

They say Daufuskie Island is hard to get to. But it’s also hard to leave. It’s a uniquely special place, one like we’ve never seen before.

With so many magnificent Lowcountry places like Charleston, Hilton Head, Savannah, Daufuskie stands out as very different.

Maybe it’s the spirit of the Gullah culture or the talented artisans who’ve been lured to this remote magical island.

Perhaps its history touches the soul. It’s hard to explain. You have to experience it to understand it.

But Daufuskie left its mark on our hearts.