From Voiceovers to Writing, Kari Loya Will Take You On a Cycling Journey

If you’re looking for a new book to read, check out the five-star Amazon book Conversations Across America by Kari Loya. This bilingual, Emmy award-winning voiceover actor writes a book about his cycling travels across America with his father.

GoNOMAD is lucky to have an excerpt from Loya’s book along with some pictures to give you a look into a story that will inspire you to take your own biking trip. 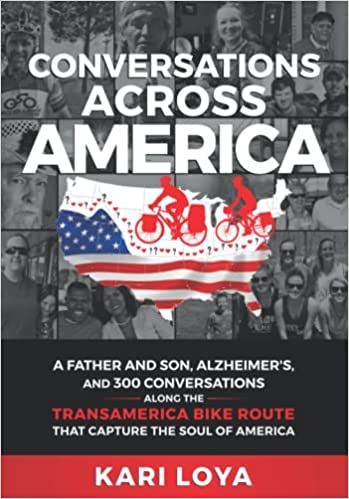 A few minutes after dawn, a bald eagle swoops down and snatches a rabbit with its talons 10 yards off the road, then flies off. The rabbit never had a chance. I spend the day feeling a bit like that rabbit.

We’re trying to cycle 61 miles from Wytheville to Damascus, but the hills are killing us. Not knowing the elevation profiles only increases frustration. We don’t have enough gas—or daylight—to get there today.

We’re somewhere in the Appalachian Mountains and come across a rudimentary camp just off the road with horse tie-ups. With the last half-hour before dusk, we cobble some dinner, then hole up in our tent and sleeping bags as darkness descends. The temperature plummets below freezing.

We then face our next major challenge: the aging male prostate. Every couple of hours, Merv has to pee. He unzips his sleeping bag, pulls his legs out of the extra liner and then the bag itself, puts on shoes with laces which he insists on tying, unzips the tent, unzips the rain fly, then turns on a flashlight to see where he is stepping.

After peeing—we hope for liquids only, no solids—he reverses the process. It seems like some sort of cruel fine-motor, gross-motor, cognitive, Hatha yoga triathlon. In the middle of the night.

While a high school student might fumble through this race in less than a minute—if they don’t just pee in a bottle—a 75-year-old, no matter how athletic, takes longer. And this now causes our biggest problem: by the time Merv is back in his sleeping bag, the bag has lost heat, and Merv is cold.

Eight painful hours later, the sun finally comes up, revealing the damage of the metaphorical storm. Merv is shivering.

“You doing okay, dad?” I ask from my own spot on the ground.

“That… was the worst… night… of sleep… ever.” He’s not looking so good.

I unzip my sleeping bag and drape it over him, tuck the mummy hood of his bag around his head, then lie directly next to him. Thirty minutes later, his body temperature has been restored—but his spirits are shot.

“This may be… too much,” he says, voicing my exact thoughts. We step outside our tent into the frosty sunshine, brooding on negative thoughts and doubts from those five words.

This may be too much.

We struggled to ride 40.1 miles—our shortest ride to date. Can we really make it across?

“Dad,” I cut him off, trying to gain perspective on our situation. “We’ve crushed it so far… YOU’VE crushed it… We’ve managed to cycle nine days straight: 75 miles, 71 miles, 76 miles, 42 miles, 41 brutal miles, 61 miles, 61 miles, 64 miles, and now 40 miles… Not a single rest day… And we know that Virginia and Kentucky might be the toughest cycling because of the hills…”

I look again at our map. Damascus is 21 miles ahead. I call timeout to keep hopes alive.

“Dad,” I continue, pointing to the map. “Let’s take a rest day here in Damascus, just up the road, then see how we feel tomorrow morning.” If we’re going to make major decisions, I’m determined for us to make them when we’re rested.

We take our time to eat and pack up, then resume pedaling… slowly… slowly… in TransAm limbo. Fortunately, the ride is mostly downhill. By the time we arrive in Damascus around noon, the temperature reaches the high sixties, the sun’s still shining, and Merv manages to smile again. Smiles have quickly become the best feedback loop. And our most prized currency.

We stop in a parking lot in the middle of town to figure out our next move. Within seconds, a flashy blue Stingray convertible pulls up next to us.

“Y’all can’t ride through here without stoppin’!” shouts the driver. “Why I was gonna run ya’ down! I’d have you stay with me at the Dancin’ Bear B&B, but we’re filled with ‘dem greasy hikers!”

We quickly learn from our friendly ambassador that Damascus is the closest thing the Appalachian Trail has to a capital. It even hosts “Trail Days” for thru-hikers in late May replete with a parade and prom. He steers us instead to a hostel simply called The Place, well-known among AT hikers.

For the rest of the day and evening, we’re off the bikes resting behinds and recharging souls as we listen to locals and hikers share colorful tales about a kaleidoscope of characters from The Trail.

Before bed, we are both in a much better mood than when we woke up. A near-complete transformation. We’ve also made peace with a fundamental principle:

We’ll do our best—and if our best gets us only halfway across the country in the time we have, that’s okay.

Equally important, we set temperature parameters for camping. So far, roughly 48 degrees seems to be the threshold. Camping in anything colder will likely deliver a knockout blow. I’ll monitor this carefully and do everything I can to stay indoors, whether at a church or hostel. And even though it will squeeze our budget, we’ll probably have to splurge for motels, too.

Conversations Across America is about a father-son journey of a lifetime: a 73-day, 4,600-mile cross-country bike trip Kari took in 2015 with his 75-year-old dad, Merv, who had early-stage Alzheimer’s. Their adventure reminds us of the power of perseverance and adaptability in the face of uncertainty. It’s also a heartwarming example of listening and discovery, including 300 short conversations with people who approached them along the way, providing a rich snapshot of America, especially rural America.

Conversations is a mix of Blue Highways, Tuesdays with Morrie, and Humans of New York… on a bike. As you read, you can’t help but reflect on your relationship with your own father and children, while gaining perspective on Alzheimer’s—which now afflicts more than six million Americans—and getting a sense of the TransAmerica Bike Trail and America itself. Above all, you will be inspired to seize-the-day with someone you love—whatever that means to you.

Kari Loya is an educational leader, executive coach, storyteller, and adventurer. He has worked nearly three decades at a range of innovative educational institutions, beginning with Teach For America in 1993 and serving most recently as headmaster at the Good Hope Country Day School in the U.S. Virgin Islands, when he received a Klingenstein Fellowship from Columbia University.

He is also an Emmy-winning bilingual voice talent, musical artist, and author of My Top 40 at 40: Making the First Half Count, and now Conversations Across America: A Father and Son, Alzheimer’s, and 300 Conversations Along the TransAmerica Bike Trail that Capture the Soul of America. He spoke at TEDx UC Davis in April 2022 on the theme of “Metamorphosis.” He holds a BA from Dartmouth College and an MBA from Columbia University. He currently lives with his wife and daughter in Sugar Land, Texas.

This story of a father who had Alzheimer’s disease and a son who has been remembering their decades-long dream to cycle across America is one to evoke deep emotion and desire to see the world. We all have those who are special to us, and we need to keep them close; what better way to do that than to plan out the trip of a lifetime together and make those memories overpower everything else.

Christy Bogan is a Massachusetts-based writer who tries to find a story in everything she encounters. Whether it’s in a new country, a favorite restaurant, or a local museum, Christy writes with the intent to tell a convincing story. No matter the location or subject, she enjoys capturing the emotions of the area.