Newport RI: Once the summer playground of the Vanderbilts, Astors, and Morgans, Welcomes Us in Winter

A giant shout-out to CNN’s Anderson Cooper’s juicy bestseller (released in September 2021) that chronicles the rise and fall of his ancestry for triggering me to want to visit this upper-crust world.

To really appreciate the magnitude of money and privilege that is Newport I started my journey where Cooper started his, at the summer “cottage” of what used to be one of the richest families in America, the Vanderbilts.

Money is no object

There are many mansions in Newport but the crowning jewel of them all is this 70 room behemoth called The Breakers.  It was designed in 1893, finished in 1895, and modeled after the palaces and villas of ancient Rome.

The railroad tycoon’s grandson, Cornelius Vanderbilt II spared no expense when he hired Richard Morris Hunt to build it.  He buried the boiler beneath the lawn to safeguard against fires and even coated the wall panels with rare platinum.

Caught in a torrent of tourists, I drifted from the Great Hall to the Billiards Room, up the grand staircase, and past the neoclassical tapestry, halting to marvel at marble fireplaces so big I could literally walk inside of them!

To be honest, the over-the-top opulence proved a bit too surreal for this coupon-cutter.

After a few hours of photographing the sprawling compound with other wide-eyed gawkers, I ducked outside for the Sparkling Lights exhibit.  This was opening day for a self-guided tour of the grounds lighted up for the holidays.  The event attracted long lines of curiosity that stretched through the wrought-iron gates and around the block.

Chapters from Cooper’s book had me envisioning a bygone era of waltzing parties, champagne and caviar, long gowns, and top hats on the back porch.

The Breakers façade was aglow with garden bushes and pathways that twinkled like stars.  The candy cane-wrapped blue atlas cedars added to the magic.

An undulating open lawn, 11-acres or more, stretched into a blue abyss of infinity, the darkening sky, and the Atlantic Ocean.

Many thanks to the Preservation Society of Newport for the opportunity to feel like a “socialite” if only for a few hours for a small sum.

Biking is so Bourgeois!

Brushing elbows with ghosts of the Gilded Age morphed into a cold reality pedaling the rest of the island in November!  Even sporting our e-bikes proved a slim defense from the gale force winds of the East Coast on Ocean Ave.  Still, biking is always worth the chapped lips because it’s the best way to capture impromptu moments.

Our quest had started at the Wayfinder, an artsy fun hotel at the end of the Claiborne Pell Newport bridge overpass.

The staff treated me to a bottle of bubbly and a discount on avocado toast when I mentioned my birthday. We dropped off our luggage in a double-queen room with a small balcony perfect for keeping cold our cooler of restaurant leftovers.

With the bridge as our backdrop, we biked south on an empty stretch of Washington Street passing waterfronts littered with empty lobster traps and festive harbors busy with holiday shoppers.

Anglers dropped line on the Gladys Carr Bolhouse Bridge reeling in pails worth of squid (calamari) to sell to the local restaurants.

Bowen’s Wharf was abuzz with decorating activity so we locked up our rides near the Kiel James Patrick Flagship store and went in search of a campy souvenir.   Typically, that’s a mug or magnet paired with a bag of beans.

In the summer, this harbor is filled with elegant yacht rentals and private charters. Today, only the poster of a popular mainstay called the Adirondack II remained.  Ironically, the gaff-rigged pilot schooner with a wooden hull was built at the Scarano Boat Building on the Hudson River, not far from where we live. We would have felt right at home

No tan lines today but the smell of roasting was in the air as we neared the Coffee Grinder.  Alyssa, the owner/barista, was celebrating her own Scorpio moment, like me, so we bonded over a bag of Armenu house blend.

For lunch, George inhaled a BBQ chili cheese dog (an ode to his favorite comedian, Brent Butt) on a picnic table outside of Cru Cafe. Bike racks determined where we’d reenergize.   I behaved far better than my mate and ordered up a coconut bacon BLT on multigrain from the plant-based eatery and juice bar called Roots.

With satiated diets, we returned to the road.   The advancing headwind was no match for our wanderlust of Newport. 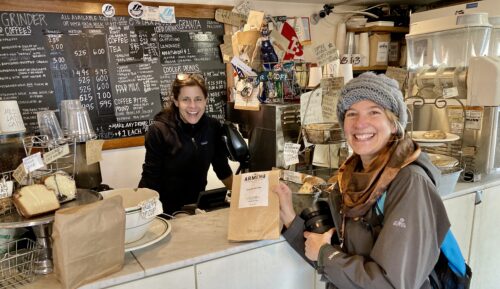 We pedaled past two giant anchors at the entrance of the Fort Adams State Park, a 19th-century fort made famous for its annual jazz and folk festivals.

We circled the perimeter paying respects to those that lost their lives in 1954 while aboard the U.S.S Bennington.  The explosion was caused by a hydraulic catapult leak during a rehearsal in Narragansett Bay.

Following Fort Adams, we meant to get stranded at Castle Hill Lighthouse but detoured our way to the Cliff Walk to see the sunset.  Another place to see an incredible sunset is from Brenton Point State Park.

Zipping past dozens of salt-sprayed estates on Ocean Ave, one more beautiful than the next, I felt a tug at my heart.  I tried to suppress pangs of jealousy and envy, after all, who wouldn’t yearn to be lucky enough to live in paradise?

We secured our rides at the end of Bellevue Ave at the southern start of the Cliff Walk. The Cliff Walk was a 3.5 mile National Historic Walking Trail that included some challenging terrain at the bottom of it, where we were, and more navigatable stretches at the top.

A manicured hedgerow opened up onto a golden sandy beach.  A small wooden box with a dozen used tennis balls triggered a longing for my Golden who used to love to play catch on isolated stretches of sand.

Despite the inherited dangers, a lone female surfer navigated the crashing waves with poise.

We scooted through tunnels, hiked up and down the iconic 40 Steps, and gathered our thoughts at benches overlooking the ocean.

Bring a pair of binoculars if you want a sneak peek at the tech tycoon, Larry Ellison’s ongoing renovations of Astors’ Beechwood.

Tears welled up in my eyes.  The natural beauty of this spot was overwhelming.  We donned sunglasses at a sheltered cove called Land’s End and watched the sun disappear into the horizon. This part of the Cliff Walk is better known for where novelist Edith Wharton wrote The Age of Innocence inside her summer estate.

We barely had enough daylight to make it back to the Wayfinder.  We earned a delicious takeout order of lobster rolls and fries from Anthony’s Seafood. Nothing fancy but fresh seafood that really hit the spot. 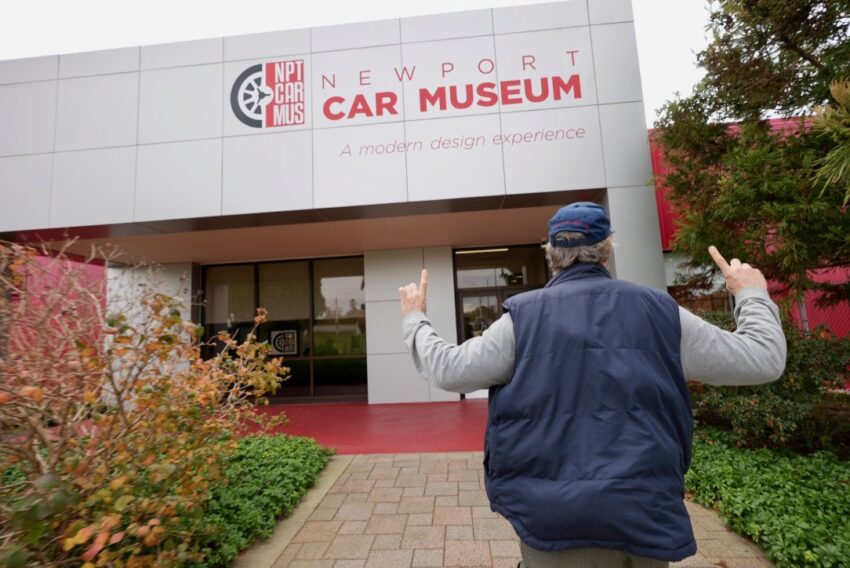 It makes sense that Newport was the site of the in­augural Vanderbilt Cup in 1900.  It’s widely considered to be the first American car race.

To pay homage to the history, we peeked inside the Audrain Automobile Museum the day before.  Today was dedicated to the Newport Car Museum in nearby Portsmouth.

As anybody on the island knows, airborne salt from coastal living can wreak havoc on vintage cars but this museum was airtight.  It was housed on the former missile manufacturing facility, Raytheon. 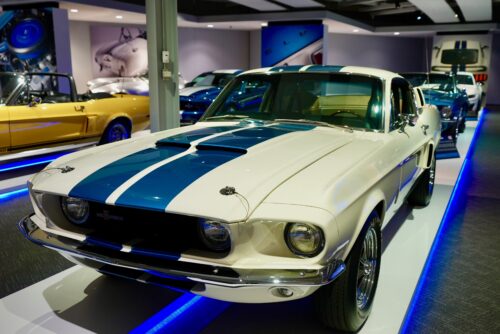 It included a private eye-popping collection of more than 85 vintage and exotic finds like the ’63 Mercedes-Benz 300 SL, the ’65 Ford Mustang K-Code Convertible, the ’93 Jaguar XJ220, the 2019 McLaren Senna, well, you get the idea, every color of a gas-guzzling rainbow.

I was born in 1970. As a result, I can appreciate horsepower and big steel when I see it.  But my affection pales in comparison to the passion that most visitors feel visiting this museum.

Take, for instance, the LS6 Chevelle SS.  Lacking the modern safety features of today, I recalled a tale told by my stepfather who crashed his blue and white stripe headlong into a tree!  He walked away just fine.

These are the kinds of treasured stories that buoy the spirits of baby boomers who wax nostalgically over their “first loves”.

Many of the visitors here are either car collectors who drive or gear heads who fix. My guy is that rare combination of both.  George’s keen eye darted straight for the timeless silhouettes of a ‘65 Shelby Cobra Daytona Coupe and then the ’66 Ford Shelby 427 SC Cobra Kirkham.

He did his due diligence by laying on the floor and peering under the hood just to be sure that no oil was leaking onto the museum floor. I maintained a cautious optimism getting out of here before closing. The curators took note.

Given the success and adulation enjoyed by the museum’s founder and businessman, Gunther Buerman was surprisingly modest.  He agreed to let us pick his brain and poise for a selfie.

George’s transmission trivia earned him an invite to join their volunteer ranks as one of them.  Retirement can’t come soon enough.

For places to stay, restaurants to try, and things to do, visit Discover Newport!