Cognac In a Deux Cheveaux

Traveling Around Cognac in the Classic, tiny Citroen 2 CV6

A two-and-a-half hour train journey from Paris delivered us to Angouleme – the first stop to our cognac safari through France. 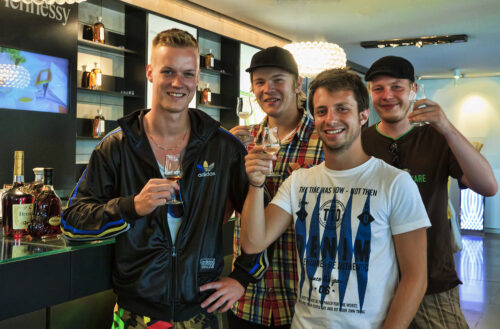 Angouleme is known the world over as France’s comic strip capital, where street names are depicted within speech bubbles and comic art is showcased on walls around the city.

Once we’d done a couple of circuits of the must-see spots and looked politely into the windows of designer boutiques I found myself glancing at my watch, wondering if nine-twenty-two in the morning was too early to start drinking.

It was, my camera assistant, Pat, pointed out, especially since I would shortly be taking custody of a Citroën 2CV6.

Some may dismiss Citroën’s iconic 2CV as nothing more than a tin can originally destined as a cheap run-about for farmers.

It was designed to carry four people (or a small farm animal) across freshly plowed fields, which its ludicrously soft suspension allowed.

Its low price-tag meant the large majority of France could now afford a motor vehicle. Unsurprisingly, back in 1948, when they were first released, Citroën soon had a five-year waiting list.

Economical on fuel, cheap to maintain, with a near immortal air-cooled engine, the 2CV was the perfect family car with a removable back seat which conveniently doubles as a picnic bench.

After finding a gear I liked and deciding which side of the road to drive on, we headed to Chadurie, a picture postcard village 30-minutes west.

The interiors are chic and artisanal, showcasing priceless antiques alongside crystal chandeliers, animal skins and stable doors reinvented into tabletops. Their cognac infused four-course table d’hôte is not to be sniffed at either.

Nearby is Le Maine Giraud, a 40 hectare winery producing cognac and pineau. We were shown around the chateau-turned-museum celebrating the life of the estate’s original owner, Alfred de Vigny, a 19th century romantic poet, playwright and novelist.

We had a brief tour of the distillery then eagerly sampled our first tipple, or ‘liquid fire’ as de Vigny referred to his Pineau des Charentes.

“Today, as for the past three hundred years, Ugni Blanc – our cognac and pineau grapes – are grown in the traditional manner, just like in the days of de Vigny,” said our guide, Mathieu Durand, whose family now own the estate and produce four different grades of cognac.

From Chadurie we bombed along country roads towards Cognac (45-minutes), driving through a veritable mosaic of vined valleys and deep forests, punctuated with ancient villages.

I was surprised to note other road users would pull over, allowing us passage, whilst others stopped and stared. This, I was later told, is the nostalgia felt by the natives when spotting a meticulously restored 2CV.

Pressing on to Cognac we dropped our bags off at the newly refurbished Hotel François Premier, situated on the town’s main square.

We immediately took in a guided walk around the old quarter where the comforting aromas of clove and cinnamon hung thick in the air above the cobbled lanes.

“Wines were heated to make brandy so they would travel well to neighboring countries,” our Cognac guide professed. “But it was the introduction of double-distillation in the early 17th century which put the town on the map.

Eau-de-vie was traditionally stored in oak barrels and one day, a delay in loading the boats left the barrels on the quayside. Far from affecting the quality of the product, the liquid was found to have improved with age.

The local merchants quickly expanded their international reach and by the 19th century cognac was widely exported.”

The medieval warehouses that guard the cognac were shaded with a peculiar black mould. “This,” our guide advised, “was a derivative of the fumes which escape the ageing casks of cognac – this is the work of angels.” The walls and air around the warehouses were quite literally saturated with pleasing fumes.

I watched the driver of a shiny truck pull into the courtyard of an ancient castle, Chateau des Valois, where he proceeded to hook up a pipe to suction aged cognac from casks stored in the castle’s dank underground caves.

“They’ll be bottling Maison Otard cognac at their nearby modern plant,” our guide announced. I though this paradoxical image somewhat fitting as cognac may be the most contradictory spirit born of French soil.

With an international reputation as a luxury spirit, it has a privileged and authoritative semblance which brings to mind cigars, club chairs and smoking jackets.

With a reputation in distillation, ageing and blending some of the finest cognacs in the world, A C Meukow, our next port of call, has a reputation to uphold.

We had heard they’d created two liqueurs by infusing their VS cognacs with vanilla and espresso coffee respectively and were sent to investigate this further.

Which is why, being partial to a good liqueur, we found ourselves looking into the menacing yellow eyes of Meukow’s trademark Panther which opens their goose-flesh inducing video cellar tour.

With backlit casks of cognac in their dark cellar, haunting music brought to life the silhouette of a large panther jumping onto a cask, lingering for a moment then disappearing into the blackness.

What followed was a fast-forward through the growth, harvesting and double-distillation process, resulting in a potent liquor which matures for at least twenty months in oak before earning its cognac label.

The hour-long tour ended in Meukow’s restaurant where glistening bottles of yellow-gold nectar awaited our sampling. I had to steel myself as it was their two liqueurs I was most eager to meet.

Finally, a frosted bottle of Meukow’s Vanilla was presented and served in a cold glass – a subtle almond and cinnamon milk-chocolate silk with a smooth vanilla afterglow.

But the pièce de résistance is the dangerously drinkable Meukow Xpresso, a deep mahogany latex-like liquid revealed by the crystal clear panther on the side of the bottle.

I could have happily spent the rest of the day getting to know its sensual coffee aromas and smooth mocha-like undertones. Instead I took in a superb cognac infused lunch which didn’t hurt one bit.

Before departing for Angouleme we visited Saintes, an ancient town studded with monasteries and convents, built on the banks of the Charente River where we took an indulgent trip on a traditional La Gabare sailing barge.

On our return we found a long hill which I negotiated at 12km/h. I was surprised to see a three-mile long queue behind us. I’d always wanted to lead a parade I told Pat, who responded glumly saying that driving was an art I’d not yet fully mastered, especially if the vehicle in question had no power-steering.

Going down the other side I showed her just how I could handle a no-power-steering 2CV through the bends, even though we were both screaming going into the corner. (Tour de Canard: 2CV hire www.tourdecanard.com).

For other Cognac travel ideas www.visit-poitou-charentes.com/en/Cognac-country