It’s one thing to correctly pronounce a single word in Welsh, but when I began speaking in complete sentences — sans my American accent — the bartender at the Brown’s Hotel poured me a free pint. When I yelled “Lladd y boi gyda’r bêl!” / “Kill the guy with the ball!” at the rugby match on the telly, well, that pub fell in love.

I may have even won over Dylan Thomas; the Brown’s was his favorite pub in Laugharne after all, and people-watching was one of his great pastimes.

Wales is ancient. This is the land of King Arthur and the Fisher King. And if Wales eats stories and drinks mythologies, Thomas is haute cuisine.

He is the best poet Wales has yet produced, and if he spoke, slept, lived, or got completely hammered in it (he did that a lot) there’s a memorial plaque and it will be on a tour.

Thomas’ birthplace of Swansea lionizes his legacy to the point of hero-worship, but his resting place of Laugharne is the kernel of truth in the myth.

There was a time when the town was vitally important; as the gateway to the Tâf and the Welsh interior, the Normans built a castle that still keeps watch on the riverfront.

But by the time Thomas moved there in 1949, the town was a hardscrabble backwater surrounded by fields and hedgerows…but also affordable.

Despite his acknowledged poetic greatness, Thomas always flirted with poverty. As blue-collar and isolated as Laugharne was, it represented the first time in his adult life when he had a house.

The heart of Thomas lore is the Boathouse, where he lived with his family, and the Writing Shed, the quintessential man-cave where he worked. It’s an isolated spot in a village already isolated; the cottage is sandwiched between the Tâf and a sheer retaining wall, separating it from the town.

But when the man died just four years after coming to Laugharne at the age of 39, the Boathouse and Writing Shed became the heliocentric binary star system of the Thomasian universe.

The mythification fairy that would later turn Marilyn Monroe and John Lennon into unassailable icons worked its magic on Thomas and anything he had touched. Laugharne glowed-up ever since.

What had been a rough fishing village transformed itself into a literary tourism hotspot; the Boathouse is now a museum and teahouse.

The Brown’s is now a boutique hotel (and where I stayed). There is a festival, a pub crawl, and a nature walk all in his name. Not only did Thomas gain a legacy, he became an industry.

But Laugharne, called Talacharn in Welsh, is nothing if not realistic, with an ironic twist. Dylan’s opinion of the town was, um, thorny. “Under Milk Wood,” perhaps Thomas’ seminal work and where the poet waxes poetic about the little lives of little people in a little town is an alternate dimension based on Laugharne.

Names were changed, of course; Laugharne became the remarkably Welsh-sounding “Llareggub.” Spell that backwards. The townsfolk love it.

Late in the day, I hiked Dylan’s Birthday Walk. Forested and inviting, it’s the trail Thomas often took up Sir John’s Hill, giving him views over the Tâf and its mighty estuarial tides.

The panorama is vast, and multiple personalities of the river deeply impressed Thomas, but walks in the woods was one of the few distractions available to him at the time.

Then and now, Laughne is tiny; I walked across it in a morning and needed a taxi from nearby Carmarthen to get to it. Arthurian landscapes, world-class pubs (and the good food, times, and company in them), plus time to think is what the town is all about.

But Wales isn’t about big cities. Its songs come from the countryside, and the little villages amid the sheep fields where Welsh is still spoken.

Death shall have no dominion

Thomas is buried just outside of town, near the ancient sanctuary of St. Martin whose yew trees seem older than the church. That the man died of a misdiagnosed lung infection seems too plain an end. That he was too poor to even afford a gravestone seems too indignant. A pauper’s cross marks the spot, painted titanium white. When the typically wet Welsh weather rots it away, the town puts up another.

And I was there on a typical wet Welsh day. Admirers left stones and coins on the cross, offerings to the spirit of a genius, perhaps, or simply tokens of remembrance. The rain kept the fans away; I was alone to pay my respects. It was oddly apropos; Wales looks better in the rain.

When the clouds are low and fingers of mist rake across the land and stormgloom puts everything in a shadowless half-light, you can almost see ancient heroes troop on the hills and the dead dance among the dales. Almost.

At the Brown’s, I read more of his work. It is natural to look at growing older with a certain sense of melancholy, but Thomas took maturity as a personal insult.

With “A Child’s Christmas in Wales” or “Fern Hill,” I got the idea that childhood was the pinnacle of Thomas’ life, and everything after was a slow spiral into self-destruction. His dying so young was certainly shocking, but not really surprising.

But focusing on his death, even where he died, is not the point of Thomas. Wales, its people and language, are living still. In the pub I took in all things Welsh, from cider to rugby to swear words that would take the bark off a tree. I was alive, and so long as Thomas is read, so is he. 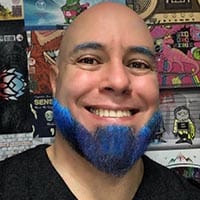 With work in the BBC and Travelsquire, David Perry has danced with the dead in Japan, raced across the deserts in Egypt, and gotten into snowball fights with Siberians. That last one is a fool’s game…
..