During the pre-pandemic period in 2019,  I was fortunate to travel among Japan’s islands from Kyushu to Hokkaido and places in between.

However, there is one activity that is revered among all others: the iconic and ancient sport of sumo wrestling, the national sport of Japan.  It was my good fortune to experience a couple of sumo tournaments in Osaka and Tokyo before the pandemic took hold.

Sumo wrestling traces its origins back some 2000 years and is related to Shinto religion harvest rites.

Today, sumo retains links to Shinto in its rituals and traditions. It is woven into the country’s cultural fabric and lays claim to being the world’s oldest sport.

Sumo wrestlers (known as rikishi) are noted for their large size, many weighing in between 300-400 lbs and up.  Their large size is achieved by a special diet of chanko-nabe and training.

Chanko-nabe is a stew of various meats, fish, and vegetables usually eaten with large amounts of rice and often followed by much beer and sake.

Sumo wrestlers usually do not eat breakfast while in training and after a morning session consume a large lunch and dinner.

This routine helps the wrestlers put on extra weight so as to be more competitive. The wrestlers live and train in communal groups called stables and their lifestyle is strictly controlled by a stable master.

The wrestlers adhere to a strict regimen of training, following rules and regulations. The stable they belong to provides for their daily needs and pays a salary based on their rank and performance.

Sumo wrestling takes place on a circular clay ring called a dohyo. It’s 15 ft in diameter marked by rice straw bales and is on a raised platform. The bouts are usually short, most lasting just a few seconds. The wrestlers wear only a thick loincloth belt called a mawashi during their bouts.

After following certain rituals and tossing handfuls of salt into the ring to ward off evil spirits, the wrestlers crouch down like opposing football linemen and launch their attack by crashing into each other.

Despite their size, the wrestlers are surprisingly agile and quick on their feet.  The rules are simple.

Whoever is pushed or thrown out of the ring or touches the ground with any part of their body except the soles of their feet is the loser.  The sumo bouts are overseen by a ring referee (gyoji) who is traditionally attired in a colorful kimono.  There are also five or six ringside judges who render decisions on questionable calls.

The sumo stadium presents a festive atmosphere.  Sumo bouts begin each day of the 15-day tournaments about mid-morning with the lower-ranked division wrestlers and continue through the day leading up to the late afternoon and evening’s top-level Makunouchi division.

Sumo fans line up at the stadium entrance prior to the start of the day’s top-level matches hoping for a closeup glimpse of their favorite sumo wrestler as they arrive.  Inside the stadium, there is excitement in the air as the afternoon’s top-level bouts get underway.

As the wrestlers file in a few at a time to ringside to await their bout, sumo fans shout out the name of their favorite along with raucous cheers. Some fans hold and wave signs with the names of their favorite wrestler in Japanese characters.

And as the wrestlers step up onto the dohyo (ring) the cheers and shouts become more intense and boisterous.

One interesting observation about sumo wrestlers stands out.  They are always in control of their emotions. Their intense training instills in them a stern and stoic countenance and approach to their sport. To a great degree, sumo is mind art. Whether they win or lose, sumo wrestlers maintain their calm and cool-headed demeanor.

In sharp contrast to professional athletes in the U.S. and elsewhere, you never see sumo wrestlers high-fiving, dancing, jumping up and down or berating their opponent after a bout. They always keep their emotions in check.

The stadium lobby areas have gift shops with all manner of sumo memorabilia and souvenirs and food concessions as well.

Food is allowed in the stadium and folks enjoy their lunch or dinner while they watch the sumo bouts.

The food concessions offer a variety of local foods like sushi, and bento box lunches, and even the famous chanko nabe which is the favorite of the sumo wrestlers.

Beer, sake, and other beverages are also available. Taking in a sumo tournament is certainly a different cultural immersion activity while in Japan.

There are six divisions in sumo and the Japan Sumo Association is the governing body that oversees professional sumo wrestling in Japan. The top division, Makunouchi, is set at 42 active wrestlers.

Within the division, there are five rankings: Maegashira, Komusubi, Sekiwake, Ozeki and Yokozuna (the highest ranking).

Rankings are based on a wrestler’s overall won-lost record performance from one tournament to the next. Wrestlers are promoted or demoted according to on how they perform.

There are six grand sumo tournaments, or basho, held annually.  The two-week-long tournaments are held at indoor stadiums in Tokyo (January, May and September), Osaka (March), Nagoya (July), and Fukuoka (November).

Daily ticket prices vary based on the exchange rate and range from approximately US$331 for a four-seat cubicle box to US$33 for a stadium seat.  Tickets are good all day with the lower-ranked division bouts in the morning and early afternoon hours.

The top division matches begin at about 4:00 pm.  The four-seat cubicle box is very suitable for two and provides extra room to stretch out.

The box seats are closer to the action and comfortable enough even with just sitting on the cushions provided.

The cheaper stadium seats are comfortable as well but are located in the upper stadium sections much further away from the action.

For information on sumo and to purchase tickets, see the Grand Sumo Tournament Home Page and Schedule, https://www.sumo.or.jp.

If you are purchasing the tickets online yourself, it’s best to consult the sumo tournament schedule in advance to work it into a travel itinerary.  Tickets are sold online beginning on specific dates prior to the tournament.

Once tickets are made available online they often sell out quickly. So you have to time your online request for when the tickets become available.

And while Japan still remains closed (as of spring 2022) to international tourism due to the Covid pandemic, sumo remains as popular as ever.  During the pandemic, the sumo tournaments had limited seating and certain restrictions in place.

But if you are looking to travel to Japan when the pandemic allows it and Japan reopens, you can enjoy the thrill, color, excitement, and culture of Japan’s acclaimed national sport. 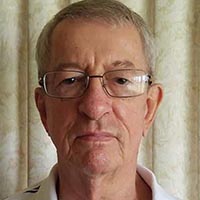 John Penisten lives in Hilo, Hawaii, and is a published travel writer and photographer as well as a Hawaii guidebook author. His most recent book, Green Hills and Blue Lagoons: A Peace Corps Memoir, independently published in 2020, covers his long-ago adventures and travels in the Fiji Islands, South Pacific, as a U.S. Peace Corps Volunteer.  His work has appeared in varied outlets including Hawaii Magazine, Westways, Honolulu Advertiser, Hawaii Tribune-Herald, Far East Traveler, Pacific, GoNOMAD, and International Travel News.