Gallup is a Famous Shopping Stop on Historic Route 66

Cruising along Route 66 between Albuquerque and Flagstaff, I passed beautiful red rocks towering toward clear blue skies heading into Gallup. My head swiveled left and right, trying not to miss anything as I drove on.

Located in northwestern New Mexico, Gallup is known as the Indian Capital of the World. This small town has an impressive collection of art murals and Indian trading posts that have been here since it was a major trading town for the Navajo and Zuni Tribes. 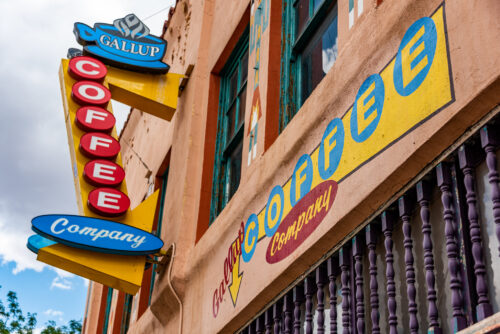 Gallup was established in 1881 as a railhead for the Atlantic and Pacific Railroad.

After hearing rail workers say they were “going to Gallup” so often to collect their pay from the paymaster, David L. Gallup, people started calling the whole town Gallup, and it stuck.

When you visit downtown Gallup, you can frequently hear the blast of the locomotive horns.

Gallup is part of a transcontinental route from Chicago to Los Angeles.

Numerous freight trains go through here along with Amtrak, which stops twice daily, making Gallup an easy city to visit by train. I’ve ridden this Amtrak route several times over the last two years, but I drove my car this time.

Like most small towns around the United States that have taken a hit due to Covid, Gallup has weathered through.

Travelers are returning to explore this western downtown with its galleries, gift shops, and Main Street with iconic Route 66 neon signs left when Gallup became part of Route 66’s major thoroughfare out west in 1927.

This easily walkable downtown area is also filled with beautiful street art that showcases the Native American lifestyle and their contributions to Gallup.

In the early 2000s, Gallup commissioned several local artists to tell Gallup’s story through art. There are over 20 art murals on the downtown buildings.

Each unique mural captures the dynamic Native American heritage and history of Gallup. On most trips, I tend to wander around and hunt for street murals and find them by surprise, but Gallup provides visitors with a map of where to find each one.

Although, when I started using the map, I did find that some murals were in the wrong location. But, even those weren’t too hard to find as you wandered around downtown.

When I showed up in Gallup, I wasn’t too familiar with its history as one of the oldest towns in the United States, wherein, 2500 BC, Ancient Puebloans settled here. However, as I walked around and looked at the art murals, I learned that Gallup was at one time called the ‘Carbon City.’

Westward-seeking workers came here searching for employment in the numerous coal mines and the timber and ranching opportunities surrounding Gallup between the 1880s and 1950s.

Other murals show Gallup’s western expansion history, the movie, train industries, and traditional Navajo and Zuni culture. I learned so much about Gallup by searching for the art murals around town.

One particular panoramic mural was very impactful to me. It is called the Long Walk Home, painted by Richard K. Yazzie.

As I have tried to learn more about my Native American history, Cherokee on my Grandfather’s side, I am disheartened to see how much the Native Americans suffered due to westward expansion.

In 1864, 7,000 Navajo people were forcibly marched from their homes to be imprisoned in Fort Sumner, four hundred miles away.

The captives suffered four years of deplorable drought, hunger, and cold conditions until the Peace Treaty of 1868 was signed, and they were released.

The mural shows a great portrayal of their journey back home to the Gallup area.

I got hungry while looking for street murals, so I headed over to Jerry’s Café, known for its huge portions of authentic Mexican food. Jerry’s Cafe has been a mainstay for Gallup locals for more than 35 years.

The busy café is small but worth it if you have to wait for a seat in the narrow restaurant.  Make sure to try Green Chile if you can.

Whether it is one of their hearty breakfasts or their fulfilling lunches, you can’t go wrong. I found the food hot, quick, and oh, so delicious!

After lunch, you can shop and pick up some wonderful gifts. You can get beautiful leather goods, western boots, and moccasins at the City Electric Shoe Shop.

City Electric Shoe Shop was established in 1924 and got its name from having the only electric equipment to repair shoes back in the day.

Customers went from waiting 3-6 months for their shoes to same-day service. Modern progress at its best! The shop is located in the historic Strand/Chief Theatre, where you can browse photos of the theater and other western memorabilia while you wait for your shoes to be made.

When Route 66 came through Gallup in 1926, numerous motels and businesses sprang up on Main Street. But the most prevalent businesses were the Indian Trading Posts that displayed Native American arts and crafts. Today you can still see many of these trading posts still operating.

One of the biggest is Richardson’s Trading Post, established in 1913. Walking by the window displays, you can see how eclectic this trading post is and always has been.

Richardson’s Trading Post is a fabulous place to see how the Indian economy interfaced with the outside world. Crossing the threshold is like stepping back in time.

From the polished hardwood floors, pew-like benches, old newspaper advertisements, stacks of richly textured rugs, and the scent of aged leather saddles filling the store, you almost expect to see a Native American bringing in their goods to trade like days past.

Richardson’s also has one of the largest collections of Navajo rugs in the region and art exhibits dating back to before the trading post began business.

Browsing the shelves overflowing with western gear, Native American art, pottery, baskets, and turquoise jewelry, I bought a pair of earrings for a friend. Did you know that trading posts were mini banks, general stores, and even pawnshops?

Also, there is one pillar honoring a Gallup resident, the only American of Japanese heritage in the Korean War to receive the Medal of Honor. Next to the Veteran’s Memorial Pillars is a cool display of Sun Daggers.

The Sun Daggers look north to Chaco Canyon, where the sun determines the time and length of the growing season. For Native Americans, as the sun rises in the east and sets in the west, it casts a shadow and marks all the historical events, like the Great Coal Strike in 1933.

I enjoyed walking around and seeing all the significant events in Gallup, New Mexico.

Since I finished searching for art murals, I headed back to my room at the historic El Rancho Hotel right on old Route 66. When you walk through the doors, you are walking in the footsteps of the Hollywood elite.

The lobby is inviting with colorful western decor, a huge fireplace, and rustic twin staircases. You can spend quite a bit of time looking at all the treasures and Hollywood artifacts displayed around the lobby.

El Rancho opened in 1937 as a base where the stars and crew for the wild west movie productions would stay.

The star power of this hotel is legendary, with past guests including John Wayne, Ronald Reagan, Spencer Tracy, Katherine Hepburn, Kirk Douglas, and the Marx Brothers.

I stayed in the comfy Marx Brothers Suite with two bedrooms and a connecting bathroom. Thanks to Bandwagon, LLC for setting up my accommodations.

The next morning, I woke up after a good night’s rest and headed out to eat a big breakfast at one of the local favorites, Earl’s Family Restaurant. Earl’s opened in 1947 and serves up huge dishes of American classics.

You can also try some Native twists like Navajo tacos or burgers. Your appetite will be fully satisfied, and you’ll be ready to start your day after a visit to Earl’s.

After filling up on great food, I drove over the short distance to Red Rock Park to burn off those calories. There are a couple of trials to choose from, the Pyramid Rock Trail and the Church Rock Trail.

The Pyramid Rock Trail has an elevation of 7,487 feet and is 1.7 miles long which takes you past amazing rock formations and a summit that will give you panoramic views of the Red Rock Park.

Out of the 279 sunny days a year that Gallup has, the day I chose to hike the Church Rock Trail was cloudy. The terrain wasn’t too bad, although I kept watching the sky and worried that the sandstone would be slippery if it did rain.

Despite the clouds, several other families and pet owners were hiking. It was neat to see kids and even dogs enjoying themselves along the trail.

If you come to Gallup and want to participate in some of their bigger events, there is a huge Red Rock Balloon Rally in early December. This annual event is the second-largest hot-air balloon rally in the world.

I would love to come back and soar over these beautiful red rock formations in a hot air balloon to view the arid ochre landscape.

Another large annual event is the Gallup Inter-Tribal Indian Ceremonial, held in the fall since 1922. It is not only one of the state’s oldest events but also one of the oldest continuous recognition of Native American culture and art.

The Ceremonial includes traditional Indian dances, a world-class exhibition of the finest Native American arts and crafts, a rodeo, a pow-wow, and parades. \

Gallup is a wonderful western town that is the perfect break for Route 66 road trips. There is so much to see and explore, and you might leave with a little more insight into Native American culture. 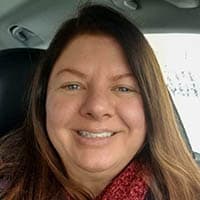 Heather Raulerson is a full-time traveler with a passion for writing and photography.  She shares her stories on www.RaulersonGirlsTravel.com and lives in Rochester Hills, Michigan when she isn’t traveling the world.