Some of the strangest possibly most worrying conversations I ever had took place in the space of three weeks I spent in Sumatra, Indonesia — the kind of conversation where you don’t know for sure how to react, what reaction is even expected, or even if it’s a serious or playful chat.

‘Travel Warning: Indonesia, dangerously beautiful’ was on a sticker a tour guide I met in a hostel gave me the day before I left Sumatra, and it summed up what it feels like to travel here perfectly for me. Although not in the way I think he wanted it to.

Topics of Conversation in Sumatra

For understandable reasons travel to this part of the world has slowed down. A string of recent disasters going as far back as the 2004 tsunami, which devastated North Sumatra, and a number of other earthquakes, have put travelers off.  Sumatra travel warnings have put people off.

But when traveling in Sumatra, it’s the perception the locals think you will have that is more observable than any of these incidents. Sometimes it could be unnerving but it was never hostile to me.

It’s actually the people being friendly, and due to the decline in tourism, Sumatrans are one of the more open people you could meet, even if the conversations seem to slip onto topics such as Osama Bin Laden and Saddam Hussein a bit more regularly, and a bit more quickly than you would hope.

Regardless of any civil unrest, a country like Sumatra will always have a sense of danger, solely because of its location in the world.

This location has an awe-inspiring effect on the scenery of Sumatra, which is riddled with both extinct and active volcanoes, huge crater lakes, jungles, and a coastline with world-class diving and surf spots. What makes all this fit together though, are the people that inhabit this diverse island.

A hand-drawn map, plenty of water and a scooter are all you need to get around Lake Maninjau, West Sumatra, in one full day. So, of course, I have forgotten the water, and it seems the map is just a drawing of a lake with one pen line around it, representing the road and bridges that surround it.

After a couple of hours navigating the ‘roads’ that in polite terms look like the top of an apple crumble enlarged and laid as a street, I pulled into a wooden hut overhanging the East side of the lake to rest and finally get some water.

Five Locals Having a Beer

Inside are just five locals having a beer and playing cards. It takes about five minutes after the formal introductions before they invite me for a beer.

Then out of the blue one decides to mention something about his friend: ‘He is friends with Saddam Hussein,’ followed by group laughter. I laugh as well and make a feeble attempt at non-awkwardness by joking about reward money, even though at this point he is dead. Luckily the response is positive with more laughter.

I finish my beer and move on, feeling unsure as to why they would think to say something like that, but, with more of an idea of the eccentric friendliness the nation would show me.

The south side of the lake would bring another odd meeting; this time as I pass a local wedding. I ride past slowly trying to take a sneaky look at the inside of the event. When I look back to the road a man is standing directly in front of me causing me to brake hard.

Standing in front of a moving vehicle with long, ‘just walked out of the jungle’ looking hair and beard, and it’s easy to see he doesn’t give a very sane first impression. My thoughts were quickly rubbished as he corrects them, ‘I am normal like you are!’

I am inclined to believe him, for now, although the fact he felt the need to tell me before saying anything else could be an argument for the latter. This went on for a while before I found space to scoot around him and head home.

There would be several more strange encounters in such a short time, the more notable ones coming from a guy called ‘Elvis’ (confirmed name because he showed me his ID and bank card), a guy called ‘Boob’ (unconfirmed but I like to believe him) and several Indonesian girls from Medan who wanted a free holiday with me to wherever I was going.

The last one I will detail, though, was with a gentleman on a 15-hour bus ride from Lake Maninjau to Lake Toba, situated in North Sumatra. This bus ride is the type that requires you to try and be as oblivious as possible to what might happen.

Not an easy trick, but making yourself blissfully unaware of dangers you know to exist is a handy survival technique.

So here I am on a bus ride around sides of mountains, on mud roads, in a thunderstorm, in the pitch black, trying not to think of words such as ‘landslides’, ‘rockfall’ and ‘painful death’ desperately trying to employ this ‘obliviousness’ trick, when the guy behind me starts a conversation.

First impressions are that he is friendly and speaks almost fluent English; it sounds like he has led an interesting life and even had a chance to travel outside Sumatra, even as far as the US, with his work. Not many Sumatrans will have this chance.

Initially, the conversation is a good distraction from the battle between the bus and every possible thing currently trying to stop it from making it to our destination. Earthquakes and Volcanoes aside, the storm, the conditions of the road, and the bus drivers seemingly lack a sense of peril show one reason why Sumatra could be seen as a dangerous place to travel.

The next thing my new friend will ask me shows another reason. “Is Osama Bin Laden popular in the UK?”

I take a moment to try and work out if he already knows the answer to this question, and has some other motive for asking me this; maybe he is testing me.

I decide that he genuinely doesn’t know and so I answer “No, not really. Is he popular here?” His response was given with a mad scientist laugh and an almost victorious gleam in his eye. This was disconcerting, to say the least, but he said “Yes! Number one. Very popular!”

For the remainder of the journey, he remained very friendly, apparently very interested in my travels. Personally, I tried to minimize conversation with him, which was difficult because with the exception of the above question he would have been a great travel partner, even buying me dinner (although the fish head covered in chilies was a little too hot for me).

It is apparent locals in Sumatra are very interested in people who travel there; they buy them dinner, become volunteer tour guides and aren’t afraid to spark up a conversation.

Maybe you can’t blame them for the eccentric questioning, many ask why you aren’t afraid of bombs, the only response I had was I wasn’t afraid but I’m slightly more afraid now thanks.

‘Travel Warning: Indonesia, dangerously beautiful’ is an extremely apt way to get people’s attention and have them rethink the way they see Indonesia. If you want to travel to a place with a sense of danger, Sumatra has it in abundance, but what I found when I was there was that this sense of danger was lost on me.

It’s hard to look at a volcano and see it as anything but amazing, although it does make you feel respectful of the dangers of the natural world. It’s also hard not to be reverent to the fact the house you’re looking at was destroyed by the land around it, but the sense of immediate danger doesn’t enter my psyche.

‘Travel Warning: Indonesia, dangerously beautiful’ should maybe be used to change some of the local’s way of thinking, although it will mean coming up with new ways to become oblivious to the fact your bus is possibly about to become a permanent part of the dangerous countryside. 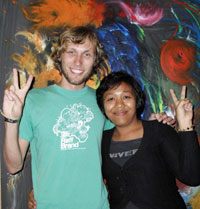 Michael Norwood is a travel writer living in London, England. He has spent recent years working and traveling and has now decided to write about it.