Hotel Del Coronado: Dark Secrets of the Grand Lady by the Sea

“And the dead know much, and the dead hold under their tongues, a locked-up story.” – Carl Sandburg

Without a doubt, Coronado, California’s priceless iconic gem is the Victorian architectural masterpiece, the Hotel Del Coronado. Built in 1888, the elegant and timeless turn-of-the-century grand resort fronts the azure waters of the Pacific.

Standing sentinel over a mile and a half of wide, pristine glittery white-sand beach surrounded by palms, it’s simply magnificent. We love this historic place and all our family and friends coming to town ask to see the hotel.

Each time we cross the impressive Coronado Bay Bridge and see the distinctive red-turreted hotel in the distance, it evokes an emotional response. It’s like seeing an old friend again and knowing this breathtaking structure cradles within its walls a host of fascinating stories.

Despite its long and storied history, elegance, and grace, the
Hotel Del (as the locals call her) also holds many deep dark secrets–those of murder, hauntings, and strange occurrences. 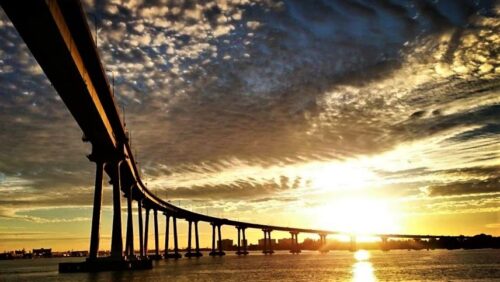 History of The Hotel Del Coronado

It was the mid-1800s, and the San Diego region was in the midst of its first real estate boom. Impressed by the natural beauty of Coronado, Elisha Babcock, Jr., and Hampton L. Story worked with San Diego developer Alonzo Horton to purchase the island in 1886 and build a magnificent oceanfront hotel.

Though seaside resorts were commonplace along America’s coastlines during the 19th century, few were as large and distinctive as the Hotel Del.

The stunning white wooden resort with its turrets and red roofing was to be the “talk of the Western world”–and indeed it was. When the 399-room hotel opened in 1888, it was the single largest resort hotel in the world. 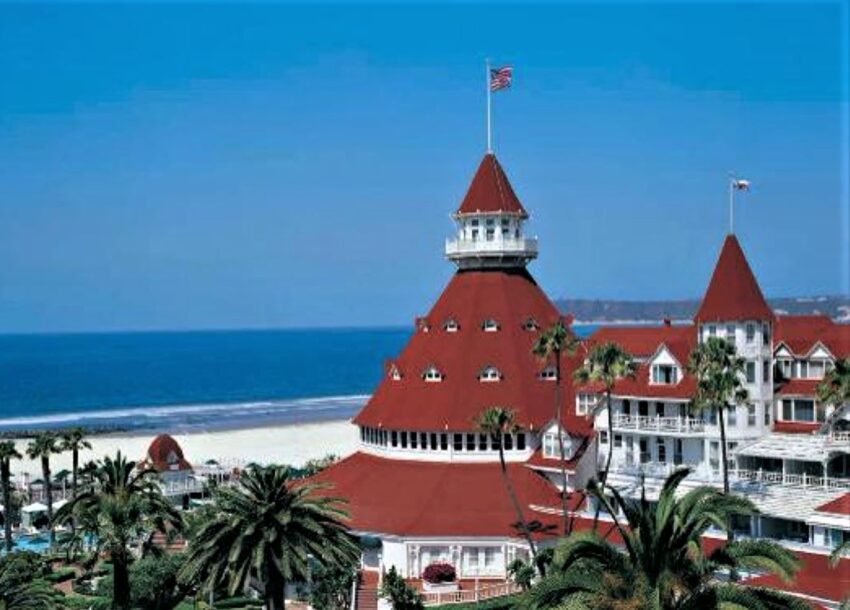 The original grounds included an Olympic-sized saltwater pool, tennis courts, and a yacht club sporting the same design as the hotel’s grand tower. Other impressive features included an Ostrich farm, a Japanese tea garden, bowling alleys, and billiard rooms. Deep-sea fishing and hunting expeditions were among the many activities offered to guests.

Throughout the years, the Hotel Del has undergone several renovations and expansions (including one currently). Nonetheless, the hotel has always maintained its Victorian charm of a bygone era. Its massive wood-paneled lobby and original balcony still appear much as it did in 1888.

The historic gold elevator is the original and continues to be run by a uniformed elevator operator. It’s a place frozen in time and as lovers of history, we have always been fascinated and intrigued.

Famous Guests of the Resort

With no bridge built from downtown San Diego, guests to the resort had to take a boat or ferry across the bay to the resort. But come they did–by the droves.

Benjamin Harrison was the first U.S. president to stay at The Del, arriving here after a cross-country road trip, though many presidents were to follow. Several Hollywood movies were filmed on-site–perhaps the best known, Some Like It Hot with Marilyn Monroe, Jack Lemmon, and Tony Curtis.

L. Frank Baum, writer and creator of the famous Wizard of Oz referred to Coronado Island as his “personal Oz.” He spent months at a time here where he did much of his writing. Many believe the Del was his inspiration for Emerald City. Baum also designed the hotel’s famous crown-shaped chandeliers.

Even Wallis Simpson Stayed at the Del

The Hotel Del is also renowned as the setting of one of the most famous love stories of all time. It’s widely reported that Wallis Simpson, married to a U.S. naval officer at the time and a Coronado resident met her future husband in 1920 at one of the hotel’s grand banquets. This chance encounter forever changed the course of British history.

That man just happened to be the heir to the British throne, Edward, Prince of Wales. He assumed the crown in early 1936, then later abdicated his throne in order to marry the divorcee. Though she would never be queen, Wallis Simpson was granted the title of Duchess of Windsor and she and Edward lived a long happy life together. Just visiting the elegant, luxurious Crown Ballroom with its crystal chandeliers, it was easy for us to imagine how the story unfolded.

But the Hotel Del has an even more famous and long-lasting guest. On Thanksgiving Day 1892, a 24-year-old woman checked into the Hotel Del and never checked out.

She registered under the name “Mrs. Lottie A. Bernard, Detroit”, arriving with no luggage except for a small handbag. The staff tells of a beautiful, well-dressed reserved young lady who appeared troubled and melancholy.

Waiting on a Gent

She revealed to a housekeeper that she had been ill and was waiting on a visit from a gentleman. Five days passed but no one came and she received no letters or telegrams.

It was later revealed the young woman was estranged from her gambler husband, Tom Morgan, and rumored to be waiting for her lover. Records indicate she ventured out into the city to purchase a handgun.

Other reports claim she’d traveled to San Diego by train from Los Angeles and fellow passengers claimed to see her arguing with a male companion who later abandoned her en route.

Death at the Hotel Del Coronado

On the evening of November 28, Morgan was seen outdoors dressed in black facing the crashing ocean waves fueled by a cold winter storm. Some believe she had a gun in her hand. Early the following morning, Kate was found lying on the steps by the beach with her gun found next to her body. The coroner ruled the death a suicide from a self-inflicted gunshot wound.

No one came to identify or claim the body. Morgan was buried here at San Diego’s Mount Hope Cemetery, her tombstone supplied by an unnamed donor.
Over the years, however, there were several myths and theories regarding Morgan’s untimely death. In the 1980s, Alan May, a San Francisco lawyer began investigating old files that shed doubt on the suicide ruling.

The supposed self-inflicted bullet in her skull did not match the caliber of the gun she had purchased.

Though foul play had always been a suspected theory, the case was never officially reopened.

The Resident Ghost Who Never Left

According to local historians, newspaper stories, and hotel employees, unexplained strange and bizarre experiences have occurred at The Del throughout the years relating to Morgan’s death. She had stayed in a third-floor guestroom where visitors

have reported flickering lights, a television that turns on and off at will, and doors that randomly open and close. Other manifestations include drastic changes in room temperature, unexplained footsteps, female voices, and blowing curtains with no air movement.

There have also been sightings of a woman dressed in black wandering the hotel’s hallways, garden, and along the seashore. Paranormal researchers have documented supernatural activity with a multitude of infrared and high-tech gadgetry.

According to employees, even the hotel’s signature gift shop, Est. 1888 has experienced mysterious happenings– items flying off shelves, often landing upright and unbroken, and books carefully rearranged. As we stood in the hotel gift shop, we pondered what it would be like to be roaming the aisles and corridors late at night when spirits tend to be most active.

Christine Donovan, director of heritage programs for Historic Hotels of America and author of the book “Beautiful Stranger: The Ghost of Kate Morgan and the Hotel Del Coronado,” states that Kate is a relatively harmless ghost generally limiting her activity to fleeting and inexplicable antics.

Donovan has researched the phenomena of ghosts extensively and though she never had a personal encounter with Kate Morgan of her own she reveals that “it is the decidedly the non-dramatic aspects of most of the stories that make a believer out of me.”

Summing up the experiences that have been reported to her, she states “If you have to spend eternity somewhere, what better place than the Del.” She has a good point.

Unbelievably, Kate Morgan’s room (now 3327) located in the original Victorian building is one of the hotel’s most requested. The curious, thrill-seekers, and investigators apparently want to see and experience it for themselves. Though I’ve stayed at The Del multiple times, I will admit I never, ever considered requesting this room. Why? I wouldn’t get a minute’s rest, waiting for that “dead of night” visitor to appear.

The Hotel Del also has another room that’s been highly requested. Room 3519, once a maid’s quarters has been the site of numerous paranormal occurrences according to the Travel Channel and former Hotel Del employees. The room’s occupant was said to be a former maid. But some claim she’d also been the mistress of the hotel owner, and later committed suicide after learning she was pregnant.

The room, also located in the original Victorian building has reports of objects moving around by themselves, guests being touched by unseen hands, strange voices, and mysterious temperature changes.

I’m not a fan of ghostly places, though I must admit I have seen and heard many strange things over the years. Some of us just attract the paranormal whether we like it or not. While I never stayed in room 3519, just standing outside its door on my last visit gave me goosebumps and a strange, eerie, unexplained feeling.

Believe It or Not

Jason Hawes, co-founder of The Atlantic Paranormal Society once said “All a skeptic is is someone who hasn’t had an experience yet.” Believing may have everything to do with seeing it with our own eyes.

Whether these occurrences at the Del are true or not, we do know for certain that two young women came to untimely deaths at this glorious hotel. So why should we be surprised at its reported hauntings?

Historic hotels are bound to carry lots of secrets. And as their legend and legacy grow, more secrets are sure to be added.

noreenkompanik.com/
If this story has inspired you to travel, why not check out the prices to get there and make it happen? Search airfares, hotels, and rental cars here. Thanks!