Colosseum Underground: Where the Gladiators Walked

Where gladiators dared to walk, tourists have walked for nearly two millennia. The Roman Colosseum is the most visited monument in Italy and has drawn as many as 20,000 visitors a day.

But where I recently descended, few people have seen over the last 1,600 years.

I took three flights of stairs into the bowels of the world’s most famous stadium, below where 60,000 people once screamed for blood and always got it. I found myself in a long, narrow corridor.

Walls of limestone and brick, all original, led me down a path hauntingly lit by floor lamps. It directed me into other hallways and corridors that turned the area into a labyrinth.

I tried to imagine myself as one of the area’s original inhabitants. This is where the gladiators roamed, waiting for their call into battle on the sandy arena floor above. This is where they prayed and wondered if these were their last moments on earth.

They could certainly hear the terrifying sounds nearby. In niches cut out of the walls were animal pens. Lions. Tigers. Boars. Wild dogs. Bears. The place was a zoo for wild animals, all starving, all waiting to tear into any live flesh they’d face later in the arena.

This is the Colosseum Underground. The city of Rome unveiled it to the public on June 26 and it has become the hottest ticket in town.

Visitors get guided tours through 15,000 square meters of history we’ve seen in films and read about in books but never seen live.

The hour-long tour is riveting in its symbolism. It’s terrifying in its purpose. It’s also refreshing in its construction as the shade was a welcome respite from the 100-degree temperature inside the Colosseum.

Once I got over the eerie feeling of walking in the footsteps of gladiators, I felt overwhelmingly impressed with the genius of the Underground. How did they get all these wild animals up more than 20 feet onto the arena floor above? How did they move the gladiators separately? The staircase I descended sure didn’t exist.

After a couple of bends in the labyrinth, I came to the answer. I saw a long post stretching from floor to ceiling encased in a large wooden ring with long handles to turn it. Hanging off the sides were ropes with heavy counterweights. On the other side was a cage big enough for a bear.

My private guide, Nadia, explained that some of the 400 workers in the Underground were assigned to herd animals into the cage and turn the wheel that lifted them to the surface. They’d burst through a platform onto the sandy floor to the delight of the mob in the stands and the terror of the gladiator, criminal or military traitor in front of them.

The Underground had 80 elevators. One in the central corridor called Gallery H, had an enormous platform that moved diagonally on runners. This platform carried teams of gladiators as well as the bigger animals such as lions, elephants and giraffes.

All these animals were captured during the Roman Empire’s conquest of foreign lands. When the Colosseum was completed in 80 A.D., the Roman Empire stretched from what is now England to Iraq. The animals represented the breadth of Rome’s empire.

Nadia pointed to the carved-out areas of the walls where the animals were kept. The pens were too narrow for them to even turn around. They weren’t fed. They were prodded. By the time they reached the arena floor, they turned whatever they faced into lunchmeat.

Not an Easy Tour

“If you love animals,” Nadia said, “this is not an easy tour.”

I couldn’t help noticing water running in crude drains through the Underground. It is a water vein called Labicano that comes from San Clemente Basilica just 300 meters away, the same vein that served as the sewage system 2,000 years ago.

The Underground was just part of the elaborate machine that made the Colosseum the center of the Roman Empire’s bloodthirsty heart from 80 A.D. to the 5th century. Today the Celio neighborhood outside the Colosseum is a pleasant, upscale neighborhood with three main streets leading to the Colosseum. A leafy, hilly park sits across the street, not far from the Colosseo subway stop.

But 2,000 years ago Celio held the gladiator’s barracks and their training area. The animals were kept in pens here and came to the Colosseum along with the gladiators the day before their time in the arena — and maybe for their last time on Earth.

Also in Celio, ominously, stood a hospital and morgue.

Despite the close proximity of the walls and the confusing layout, I never felt claustrophobic. The city does an excellent job of staggering the crowds. The Underground has a limited number of tickets and tours. Besides my photographer and guide, only one other small tour toured with us.

This isn’t the first time the Underground has opened. In the 20th century, residents in the neighborhood would prowl through the corridors on their own.

In 2009 the Underground was open to the public on a separate ticket. However, this time the city unveiled a much larger Underground than ever before.

The tour also includes the Colosseum itself, plus the Roman Forum and nearby Palatine Hill, where myth has it that Romulus and Remus founded the city in 753 B.C.

I’ve been to the Colosseum countless times. However, ascending up a staircase into what was the arena floor offered a new and creepy perspective.

Greeting me, on this steaming day, was one side of the Colosseum stands that stretched to its original height. I saw the black and white seats on the lower level that were reserved for the Roman aristocracy. The stadium consisted of five levels. While entrance was free, the top level was reserved for the poorest citizenry. 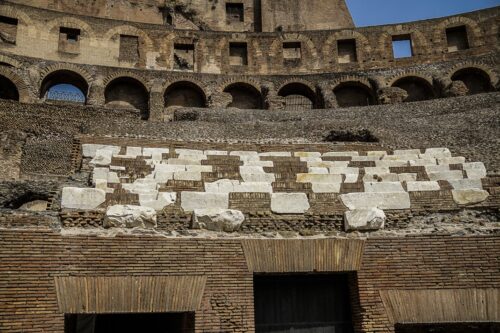 In the middle of the arena today, you see tall brick columns that served as a foundation for the top floor. On the far side, I could see a large section with a firm, concrete floor, roped off.

This is part of the city’s renovation project which hopes to cover the entire Colosseum floor to its original splendor, minus the sand.

By 2023, they want to have the capability to open and close the roof. It would hold concerts, cultural events but, alas, no gladiator games.

The Underground is also part of a massive three-part renovation project. It was originally excavated in the 19th century but wasn’t unveiled until this 25-million-euro renovation project financed by Tod’s, the Italian fashion house. The city cleaned the Colosseum’s facade in the first phase. The Underground was the second phase. The third phase will restore the galleries and lighting system plus add a visitor’s center. The target date is 2024.

It took two years for 80 archaeologists, architects, and engineers to gather in Rome and breathe life back into the Underground, and, said Tod’s chairman Diego Della Valle, “to bring back to the center of attention a monument that the whole world loves.”

As stadiums rise and fall in the U.S., the Colosseum lives on. Today, it even lives underground.

How to get there: