A Day in Casablanca, a Night at Rick’s Cafe

Just the name Casablanca recalls scenes from the eponymous 1942 classic film. Humphrey Bogart, as the proprietor of Rick’s Café, utters those famous lines: “Of all the gin joints in all the towns in all the world, she walks into mine” and “Here’s looking at you, kid.”

And Sam, sitting at the piano, plays “As Time Goes By” with lyrics, you can’t get out of your head: “You must remember this, a kiss is still a kiss.”

But if you expect to experience such romantic vestiges of the past you will be disappointed.

Filmed the Movie in Burbank

The movie version of Casablanca was a Hollywood invention, filmed almost entirely in Burbank, Calif.

There never was a Rick’s Café until a retired American diplomat created one in 2004 to pay tribute to the film and foster friendly relations between the U.S. and Morocco.

While other cities in Morocco have their roots deep in Moroccan history and Arab culture with maze-like medieval quarters and colorful souks, “Casa” as it is called, is a surprisingly modern cosmopolitan city, the kingdom’s largest and its commercial capital.

Named for the Spanish phrase “casa blanca,” or white house, most Casa buildings are indeed white unlike the tawny tones of ancient cities, such as Fez and Marrakech.

Much of what you see in Casablanca dates from the early 1900s when Morocco became a French protectorate with the city as its economic center.

After Morocco’s independence and transition to a constitutional monarchy in the 1950s, Casablanca began to experience rapid—some argue too rapid—growth that continues today with a population of more than 4 million. Skyscrapers and construction cranes punctuate the skyline. Traffic is downright horrific with Mercedes sedans sharing the road with donkey carts.

Rural residents migrating to Casa searching for jobs often end up in shantytowns. Wealthy business executives reside in upscale suburbs, putting up corporate colleagues in five-star hotels such as the Four Seasons.

The dichotomy between rich and poor, French and North African in this port city is poignantly evident. One ex-pat describes it as Marseille when the street cleaners are on strike.

So, is Casablanca worth seeing? If you have a day—or two—the answer is yes, and the No. 1 reason is the mosque.

Among the world’s largest, Hassan II Mosque holds 25,000 faithful inside, another 80,000 outside amid a jaw-dropping 22-acre complex that also contains a history museum and library.

During his birthday celebration in 1980, former King Hassan II, perhaps recognizing Casa’s lack of monuments, said “I wish Casablanca to be endowed with a large, fine building of which it can be proud until the end of time.”

Construction began in 1986 and finished in 1993 employing thousands of craftsmen and laborers working around the clock.

This mosque is one of the few in the Islamic world welcoming non-believers. Knees and shoulders must be covered when taking the one-hour guided tours. Women need not wear veils. Shoes must be removed inside.

‘God’s Throne is on the Water’

The mosque at the edge of the Atlantic lies partly over water in accordance with the king’s translation of the Quran that God’s throne is on water. Visitors get a glimpse of the ocean through a window in the floor of the main hall.

The mosque’s most striking feature, its minaret, soars 690 feet topped by a laser light beam pointing toward Mecca. On a clear night, it can be seen for 19 miles. Inside, the massive prayer hall spreads below a retractable roof that opens in three minutes.

Other high-tech features include a heated floor and hidden modern sound system. A mezzanine is reserved for women worshippers. The lower level has public hammams and an ablutions hall with marble fountains in the shape of lotus flowers.

Rick’s and Other Eateries 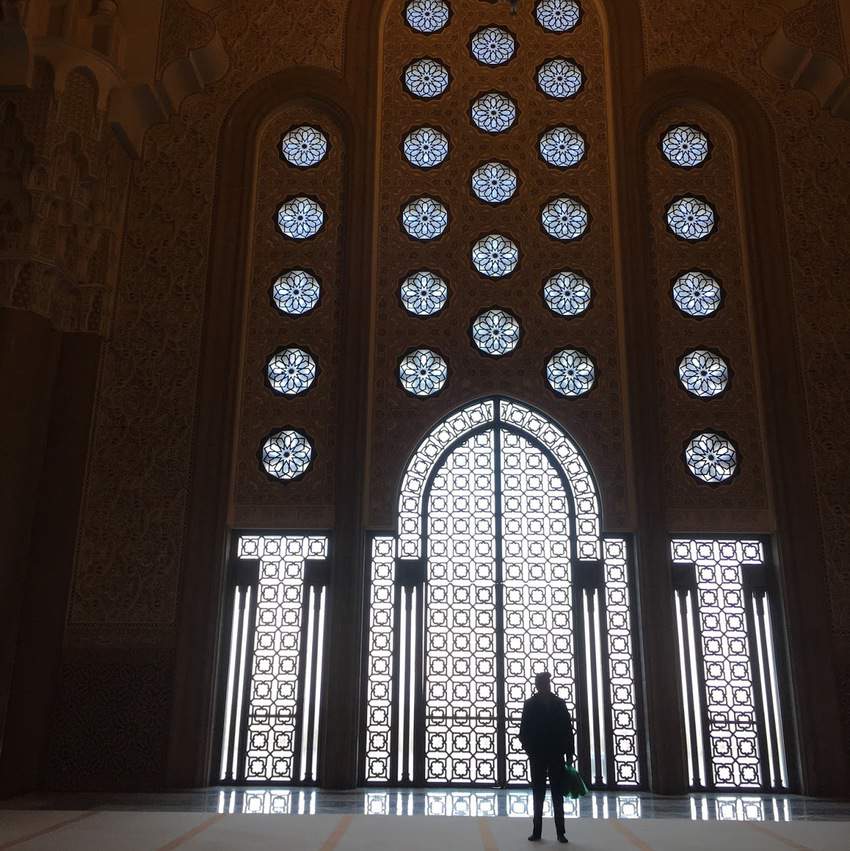 On my first visit to Casablanca, I avoided Rick’s Café, writing it off sight unseen as a tourist trap. On my second visit, curiosity got the best of me and I made a reservation.

Turns out my assumption about Rick’s was wrong. My husband and I had a lovely lunch at a cozy table overlooking a light-filled courtyard.

Yes, a tour bus parked outside disgorged a big group, but once it was escorted to a separate dining area all was quiet in the main restaurant.

As we sipped wine and signature cocktails, we admired the Moroccan brass lanterns, balustrades, arches, and carved wood lattice in this renovated riad, a 1930s mansion made to look like the movie version of the World War II-era café.

A waiter in a red fez took our order. The time-honored starter, a fig and goat cheese salad, did not disappoint nor did the lamb couscous main course. The menu offers a mix of Moroccan, French and American dishes, from foie gras to T-bone steak to beef kebabs.

In the evening, Rick’s becomes a swanky nightclub as well as an upscale restaurant. Wearing ripped jeans and flip-flops? You’ll be stopped at the door. Live jazz and piano music entertain patrons most nights. And while you’ll be tempted to say “Play it again, Sam” know that Bogey never delivered that line in the movie.

The closest any bit of dialogue comes to the oft-misquoted phrase comes when Ingrid Berman, starring as Rick’s old flame, Ilsa, tells the pianist “Play it, Sam.”

While Rick’s ranks as a destination restaurant popular with visitors as well as locals, if you’re looking for other options, you’ll find eateries ranging from French fine dining to family-run cafes serving Moroccan tagine. American fast-food joints McDonald’s and Domino’s Pizza do a brisk business.

Soda instead of Wine

Understand that devout Muslims do not drink alcohol so at some establishments you may have to settle for soda or juice instead of wine or beer.

One of them, La Sqala Café Maure, lies within the ochre ruins of an 18th-century Portuguese fortress. It serves traditional Moroccan dishes, such as briouates (stuffed pastries) and bastilles (savory pies), in a garden setting with fountains, lush foliage, and colorful tiles.

Go for breakfast, lunch, or dinner or just a smoothie or mint tea break while exploring Casa’s medina, or old quarter, next door.

If you travel down Casa’s Corniche, its scenic roadway along the Atlantic coast, you might stop at Le Cabestan for lunch, dinner, or just a cocktail at the bar overlooking the ocean.

In business for more than 40 years and recently renovated, you’ll find it pricey by Moroccan standards with a menu heavy on seafood, French and Mediterranean fare.

The lounge is popular with the late-night crowd when live music ups the tempo.

Or perhaps instead of fine dining or clubbing, you just want a walk along this beachfront promenade and a quick bite inside the food court at the Morocco Mall. 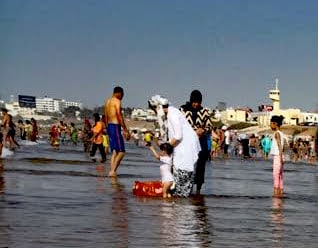 The megamall, at the end of the Corniche, caters to those with pockets deep enough to shop at Louis Vuitton, Fendi, and Gucci as well as those of more modest means who frequent Zara and H&M.

In addition to the food court with American fast-food outlets, the mall has a Wal-Mart-like grocery and sundries store, an indoor amusement park for kids, an IMAX theater, and a three-story aquarium stocked with sharks, rays, and tropical fish.

Jews have been present in Morocco for more than 2,000 years. The region once had the largest Jewish population in Islam. Most Jews migrated to Israel following its founding in 1948 and today Morocco is 99 percent Muslim. Yet, Jewish heritage continues to be valued.

The Museum of Moroccan Judaism is the only Jewish Museum in the Arab world. Housed in a former orphanage in a residential neighborhood of Casablanca, it was opened in 1997 by the Judeo-Moroccan Cultural Heritage Foundation and contains ritual objects, clothing, tools, and synagogue reconstructions.

At the entrance, an exhibit explains the 2011 revision to Morocco’s constitution, made in response to the Arab Spring.

It is the only constitution in an Islamic country to single out the importance of Hebraic and other heritages. King Mohammed VI, in a speech delivered in 2015, recognized the Jews’ “intrinsic part of our country’s heritage” and pledged to uphold freedom of religion for followers of Judaism who are “loyal citizens for whom I have a deep affection.”

A Hanukkah lamp stands chest high, occupying pride of place in one of the permanent exhibit rooms. It was a 2012 gift from the American Sephardi Federation in New York—further evidence of friendly Moroccan-American relations.