A History of New York in 27 Buildings 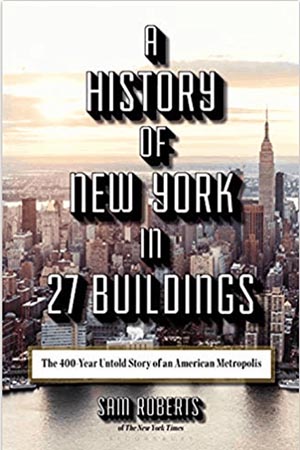 presents a history of the city using its buildings as the subject.

Roberts has chosen 27 of the 700,000 or so buildings in New York and has woven together architectural insights with commentary and history (and some fun facts) in a detailed description of The City and its history.

The book features 27 chapters (one per building) of clear writing and insightful photography and will leave you the knowledge you never knew you wanted.

Excerpt From the Book

Not long after Governor Alfred E. Smith of New York lost the rancorous 1928 presidential race, he and Eddie Dowling, a Ziegfield Follies hoofer and Broadway actor were standing at adjoining urinals in the Lotos Club when John Jakob Raskob, a Du Pont and General Motors millionaire who had been Smith’s campaign manager, entered the men’s room.

According to an account by Dowling (who may or may not have discovered Kate Smith, and later became a Pulitzer Prize-winning producer), Al Smith was not only lamenting his loss but complaining bitterly that the only income he would have after leaving Albany was his meager government pension.

“Don’t worry, Al,” Raskob declared.  “I’m going to build a new skyscraper—biggest in the world—and you’re going to be president of the company.”

Whether the Empire State Building was, indeed, born in the men’s room at the Lotos Club, which was then on West Fifty-Seventh Street, is arguable, but the episode is plausible because it epitomized Raskob’s impetuousness.

In August 1929, when the average American’s monthly salary was below ninety dollars, Raskob, in an article in the Ladies Home Journal headlined “Everybody Ought to be Rich,” urged working-class Americans to buy fifteen dollars’ worth of shares monthly in an investment trust.  Barely two months later, the stock market crashed.

But Wall Street would recover from the crash long before Raskob’s heirs would recover his investment in New York’s signature skyscraper, which he built on an abiding faith in his own judgment and in the city’s future.

Clad in Indiana limestone, punctuated by sixty-four hundred windows and perched on a five-story base, the Empire State would survive the Depression, King Kong, and a direct hit (accidental) by an American bomber.

The classic 1957 film An Affair to Remember would immortalize it, too, like Cary Grant and Deborah Kerr, cruising up the Hudson on the Constitution, agree to meet atop the tower again in six months.  To which Kerr exclaims: “Perfect! It’s the nearest thing to heaven we have in New York!”

Two centuries earlier, much of midtown was farmland belonging to the Murray family, after whom Murray Hill was named. Legend has it that after American troops landed at Kips Bay on the East Side as the fled fleeing from the British in Brooklyn, Mary Murray entertained William Howe and his fellow Redcoat generals with tea and cake long enough to let the remnants of the Continental Army retreat to Upper Manhattan and the Bronx.

In 1893, William Waldorf Astor, the grandson of John Jacob Astor Sr., perpetuated the neighborhood’s reputation for hospitality by opening the Waldorf Hotel on Fifth Avenue and Thirty-Third Street. Three years later, retaliating for the construction debris that the Waldorf had deposited on his mother’s house next door, William’s cousin, John Jacob Astor IV (who would die in 1912 on the Titanic) built the rival Astoria next door.

When they merged after agonizing negotiations, the Waldorf-Astoria with thirteen hundred bedrooms, was the largest hotel in the world.

By the late 1920s, even faded elegance would have been an extravagant description of the hotel property that Prohibition and the ongoing uptown migration had doomed.

While the intersection was relatively isolated from mass transit, Raskob coveted the site because under the city’s zoning regulations its oversize footprint would grant him more leeway to reach for the sky.

Unfazed by the onset of the Depression, he would do for his new skyscraper what no one could accomplish for the stock market: push it higher and higher.

His architectural prototype was deceptively simple and, reversing roles, it was the client who initially demonstrated it to the designers: Raskob extended his arm at a ninety-degree angle flourished a newly sharpened pencil.

But the same 1916 Zoning Resolution that allowed him to build higher as also enacted to safeguard the diminishing light and the circulation of air threatened by sprouting skyscrapers.  The law required setbacks, which meant that buildings had to be tapered as they grew taller.

A pencil as bulky as half a city block would not pass muster. 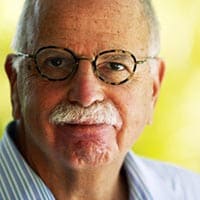 Sam Roberts is the Urban Affairs correspondent of the New York Times. He hosts The New York Times Close Up, and the podcasts Only in New York and The Caucus.  He is the author of A History of New York in 101 objects and Grand Central: How a Train Station Transformed America, among others.  He lives in New York with his wife and two sons.

Buy the book A History of New York in 27 Buildings: The 400-Year Untold Story of an American Metropolis