Biting into the juicy sweet jumbo shrimp, a little blob of marinara dripped down my chin. I wiped it off with my napkin, as I watched the fisherman and leisure sailors off in the distance. The sun beat down making the bench underneath me a little too warm.

Eager to stretch my legs, I walked over to the fence overlooking the water. The seagulls were squawking seemingly arguing over which diner was their best bet for a little morsel of food.

I had always wanted to explore New England. The quaint Victorian houses, the nautical history, the preppy reserve of its people. The “WASPY-ness” of it all intrigued me.

“Hey are you guys ready to head back to the city?” Steve shouted out to the group.

A chorus of “yeahs” answered back. Too bad I didn’t have any time to visit New England. I was in City Island. In the Bronx.

Yes, you read that correctly. City Island is a small New England-like fishing village located within the confines of New York City. Restricted access to the island kept it from getting too developed, and the result is an island that is a little less Gotham and a little more Cape Cod.

Up until a week before my visit, I had never even heard of City Island, despite living in New York for five years and being a born-and-bred East Coaster.

Like most people, I assumed much of New York’s five boroughs, (with the exception of Staten Island), all looked similar or “urban” for lack of a better word. Tightly packed buildings, not a shred of green, unless you happen to be in a park, and lots of cement.

That all changed when I joined a cycling group on a whim. The group had an upcoming trip planned to City Island, where we were promised a 40-mile round-trip ride and lots of seafood.

I had no idea what I was getting myself into, but I had just bought a new bike and was up for a little adventure. After all, everything I knew of New York consisted of bar-hopping in Brooklyn and searching for dumplings in Chinatown near my office.

So I hopped on my shiny new bike (“Pistachio,” as I like to call her) and pedaled with the rest of the group up the West Side Highway catching the surprisingly stunning vistas of New Jersey’s cliffs and the George Washington Bridge.

We then made our way off the path into traffic, crossing Martin Luther King Boulevard and cycling through the streets filled with dollar stores, fast food chains, and reggae blaring out of cars.

This was the scene for several miles, until we headed into Pelham Park. Slowly the din of the city started to fade away as we made our way through the massive green space. Families were taking advantage of the great weather, grilling food, and playing Frisbee.

No Idea What Was in Store

It wasn’t until we started crossing the bridge to City Island, that I had no idea what was in store. As we crossed the bay, all signs of New York disappeared. Suddenly I was transported to…. Maine. Or what I imagined Maine to be like.

As we biked down the main drag of City Island Avenue, I took in the old wooden houses, aging storefronts, antique stores, and galleries. I was utterly floored and yet totally thrilled at the same time. I couldn’t wait to see all the island had to offer. But first things first; we were starving.

Seafood is one of City Island’s main draws, with places like Johnny’s Reef, The Lobster Box, Seafood City, and the Original Crab Shanty, battling it out for the title of best seafood restaurant. There’s even a restaurant called Caribbean Island for those who want something a little more exotic.

We settled for Johnny’s Reef, a casual but immensely popular restaurant located at the end of City Island Avenue, right on the water. What the over fifty-year-old cafeteria-style restaurant lacks in style, it makes up for in delicious, (albeit simple), food.

Johnny’s dishes up every kind of seafood imaginable, lobster, shrimp, squid, crabs, scallops and more all served steamed or breaded and deep-fried. For those not into seafood, they have hot dogs and hamburgers.

It’s not exactly fine dining but it sure is tasty, (except for the fries; they’re soggy, so stay away from them). And that’s part of the appeal. Johnny’s is the kind of place that brings to mind lazy summers, summer camp, and a time when you truly could have cared less about how many stars a restaurant has.

After we stuffed our faces on fried clams and Coronas, we headed over to Lickety Split to indulge in some seriously gigantic portions of ice cream. The small green shack keeps hula hoops and chalk on hand to keep the kids entertained, and serves up flavors like Rum Raisin.

Though the ice cream is not homemade, it turns out this quaint parlor, is owned by the family that lives behind it, only adding to the small-town feel.

After getting a few suggestions on things to do from my ice cream scooper, I decided to visit the City Island Nautical Museum. I was intrigued to find out how City Island came to be and the museum just happened to be around the corner from Lickety Split, so I lucked out.

The museum, which used to be a public school, now houses photographs, paintings, and artifacts relating to the island’s distinctive history. Purchased from the Native Americans by Thomas Pell in 1654, it was originally part of Westchester County.

What started out as a farming community quickly developed into a center for the shipping and oyster industries. Finally, after the Civil War, the luxury yacht market took hold producing many boats that would go on to win races like America’s Cup.

It wasn’t until 1873 that a toll bridge was built connecting the island to the mainland and not until 1895 that it became annexed by the city of New York.

I also learned that the island is still home to several yachting clubs and is home to the Columbia and Fordham University sailing teams.

I learned if you’re not in the mood to join a yacht club, you can always rent a boat from the family-run Jack’s Bait and Tackle. Alas, I was solo and with a bike, so I figured I’d be better off staying on dry land.

Nonetheless, I decided to visit the shop to see what my options were should I ever come back with friends for some boating action. For only $60, (ok $59.99), I could rent a four-person fiberglass boat for the entire day, complete with 4 gallons of gas, lifejackets, and a map. Divided by four, not a bum deal!

I could also charter a boat or take a fishing tour.

Apparently, the Long Island Sound is chock full of flounder, bass, and bluefish. And this whole time I thought the waters of New York were just full of syringes. Even so, I’ll leave catching fish to the boys and stick to eating fish.

I hopped back on my bike and rode around the island to check out some of the Victorian and Colonial houses I spotted from afar. The best part about City Island is it’s tiny, (1.5 x.5 miles, I later found out), which made exploring it exceptionally easy.

Streets like King, William, Minneford, and Schofield Avenues have some of the best house-spotting, although you can appreciate the old-fashioned styles almost anywhere on the island. I noticed, quite enviously, that many of the homes also have their own private beaches. Note to self: make friends with the locals.

Having had my full of City Island’s nautical and architectural delights, I decided it was time to explore something I was more familiar with: shopping. Heading back to the main drag, I stopped in at Starving Artist Café, a café-cum-gallery-cum-retail store. After picking up an iced coffee, I perused the collection of handmade jewelry and art books.

The store was cute, but with nothing there I wanted to buy, I slipped out and made my way to Early Ruth’s Antiques. A peculiar name, but an interesting store. The American heavy collection was eclectic but appealing to someone like myself who isn’t too well versed on art. Had I a large country house whose walls I needed filling, I may have considered a painting or two. But alas I did not.

I continued on to Exotiqa International Arts, Midtown Antiques, and lastly Calico Juno Designs, which specializes in gemstone and wire designs.

Impressively I learned some of the owner’s Bonnie Riconda’s designs have been featured in magazines like In Style and been worn by celebs like Eva Longoria. I guess there is a little bit of “New York” in City Island.

After spending the entire day discovering City Island, it was time for a drink before heading out. I stopped in at The Snug, a popular Irish pub and one of the few bars on the island. It sits adjacent to City Island Diner, a must for breakfast according to the bartender.

There weren’t too many people inside the bar, as most were probably still out scarfing down calamari or fried oysters. But I enjoyed chatting it up with the amiable bartender and hanging out in one of the few bars in New York where it’s likely “everybody knows your name.” 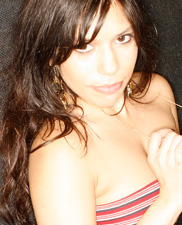 Hailing from a magical land called New Jersey, Rachel Khona is a writer and performer living in Brooklyn. She has written for Inked, Ask Men, Treats and Vaga where she is a contributing editor. When not writing, she can be seen performing some of her work for Inner Monologues, Speakeasy Stories, and Stories from the Creek. In her spare time, she like sliding down rainbows, red wine, Axl Rose, and chasing imaginary squirrels.