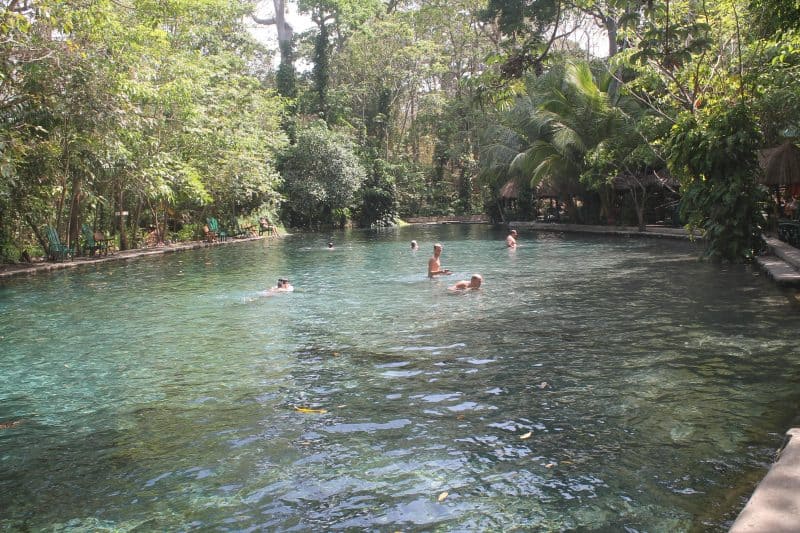 Ometepe, Nicaragua: Between the Two Hills

“I was fully caked with mud from the trail. Our near-vertical descent into the Maderas crater was the highlight of our trip to Nicaragua. The crater itself is one of the most unique places on Earth; a dreamscape.”

Ometepe means “between two hills,” in Nahuatl, the indigenous language of Nicaragua, and Isla de Ometepe is 276 square kilometers of pristine forest, archeological treasure troves, wildlife, and culture worth studying for months, but enjoyed in a few days.

The island consists of two volcanoes, Concepción (1610 meters) and Maderas (1394 meters), joined by a land isthmus. The surrounding waters of Lago Cocibolca, or Lake Nicaragua, are home to the world’s only species of freshwater shark.

And the best part is that Ometepe is still off-the-beaten-path. You won’t find screaming resorts or even big eco-lodges. Instead, you will have plenty of space and quiet to observe and enjoy all this pristine island has to offer.

The dry season lasts from December through May, though the best cultural festivals take place in November and July. Wildlife viewing is excellent year-round and is one of the island’s main attractions. Over 80 bird species inhabit the island. Migrating birds flock to Ometepe in May.

You can get to Isla de Ometepe from either Managua or Granada. From Managua to Ometepe is about 130 kilometers by the highway.

Roundtrip from Managua to Ometepe:

There is so much to see on Ometepe, and many ways to see it. Explore by bus, car, horse, bicycle, canoe, or on foot. There are no addresses in Nicaragua; only directions. So, bring your pocket dictionary on this trip!

Buses travel in figure eight around the two volcanoes, frequently on weekdays, and scarcely on the weekends. Schedules are posted, but not adhered to. Ask around — the locals always seem to know when the next bus is coming, and where you’d be most comfortable waiting (usually in front of someone’s tienda).

The two-hour-long island-wide bus ride, with stops along the way, is a magnificent slideshow of the beautiful scenery and colorful livelihoods that define Ometepe.

The bus stops to pick up passengers, and there are many opportunities to shoot photos through an open bus window.

If you can endure four hours on the Mozorola, a launch painted a brilliant red, blue and yellow, and laden with passengers plus miscellany, then landing at Altagracia has its perks. You will not disembark at Altagracia and be left standing there, slack-jawed and spinning like the cut-out rooster on a rooftop weathervane.

You will be greeted immediately, and offered a free ride into town — perhaps on a truck, with three families and their pets, leaning against bushels of plantains — and invitations to stay at various hospedajes. Refuse once, and you’ll be offered a second time, with a discount on kayak rental. Take the flyers, accept a ride.

You are in the loving care of the most hospitable nicaraguensës. Ometepe’s pre-Columbian history is evident throughout the town of Altagracia. You can learn all about the island, plus purchase art objects and replicas at El Museo Ometepe, near the Alcaldía Municipal, open daily from 8-12 and 1-5. The museum also furnishes visitors with ecotourism information. For a close encounter with well-maintained stone carvings, visit the church located right in the center of town.

The annual Fiesta de San Diego, in November, is a weeklong commemoration of the pilgrimage and death of Altagracia’s patron saint. The community gathers to dance the Baile de Zompopo. A representation or statue of the saint is carried around the island, a symbolic reenactment of the saint’s pilgrimage.

The idol is returned to the Catholic church of Altagracia on November 18th. Every April 28-30, the people of Altagracia throw a festival in honor of San Pedro Martir.

The magnet of activity is at the southern tip of town, on the property of Lorío Castillano. A small chapel there honors the saint, who is believed to have answered the community’s pleas to expel the witch or demonic force that was scaring animals and making the forest impassible. Drinking, guitar playing and feasting are activities you will be invited to take part in, if you show some friendliness and curiosity.

I have spoken to more than one victim of “Santo Domingo Fever,” the urge to stay and relax on white sand beaches…forever. Swaying hammocks and Coke in glass bottles simply charms the hiking boots off. Santo Domingo is en route from Altagracia to Balgüe. Just ask the bus driver to let you off there, or follow the signs in your rental car. Finca Santo Domingo and Villa Paraíso (Tel: 045-34675) both accept credit cards.

After a bumpy bus ride from Altagracia, plan to spend a couple of nights at Finca Magdalena, an organic coffee co-op and rustic lodge, where you will be served three hot meals a day with the warmest welcome. Watch coffee being processed the old fashioned way– by hand.

Better yet, volunteer to help the co-op. Along the footpaths that leave the barn, discover petroglyphs (mystic rock carvings). Be discovered by monkeys, and swooping white heron. You’ll have to ask for directions in Balgüe, as there’s no way to contact the Finca. Word of mouth, only. This is a special place.

This is also a great base for your climb up Volcán Maderas, a challenging, four-hour trek through the awe-inspiring rainforest. Both white-faced capuchin monkeys and mantled howler monkeys are numerous and curious.

Once you spot their figures in the canopy, keep your eyes peeled. Parakeets, squirrels, butterflies, large beetles, caterpillars, bats, and urracas — large blue swallowtails, are found all over the island. But the crater itself is one of the most unique places on Earth; a dreamscape.

You step from volcanic rock into a soft marsh, blanketed with the brightest green grass. Warm, clear waters begin just where the grass ends. Visibility is about 100 meters. The lagoon sparkles through kaleidoscopic clouds.

If ever there were a sleepy port town, Moyogalpa is it. “Just passing through,” you’ll say to invitations here. Notwithstanding, several hotels will accommodate you, and the food is typical of the whole island– generous portions served when the commercials come on TV.

You’ll be comfortable for a night at El Pirata Hotel Restaurante, del Banco Nacional, una cuadra al sur. Tel: 045-94262. The Cari Hotel & Marina seems to have a lot going on, and you can reserve in Managua, Tel: 222-6331, or in Moyogalpa, Tel: 045-94263. Hotel Aly rents bicycles and Hotel La Bahia is near more restaurants, but Hotel

Join the Fiesta de Santa Ana, July 23-26, in Moyogalpa. Witness the Dance of the Inditas, costumed processions, and perchance a bullfight or at least a duck- or chicken-race. Staple foods of the fiesta are chicken, rice, beans, fish, chicken, rice, more beans, and did I mention chicken? Vegetables, bread, cheeses, and coffee are also on the menu.

Volcán Concepción, on the northwest side of the island, is easier to climb than Maderas. The volcano’s active fumaroles are mesmerizing, but its near-perfect cone is shrouded in a thick cloud most of the time, and you cannot climb to the top. Concepción last erupted in 1986. The fertile soil in the area yields crops of coffee, tobacco, plantains and bananas.

Other highlights of Isla de Ometepe include the waterfall at San Ramon, the scale model of Ometepe in Moyogalpa, legends and lagoons of Charco Verde, petroglyphs at Finca Magdalena, Finca el Porvenir, and La Palma, or pescado corriente, the island’s signature dish of the whole, fried tilapia.