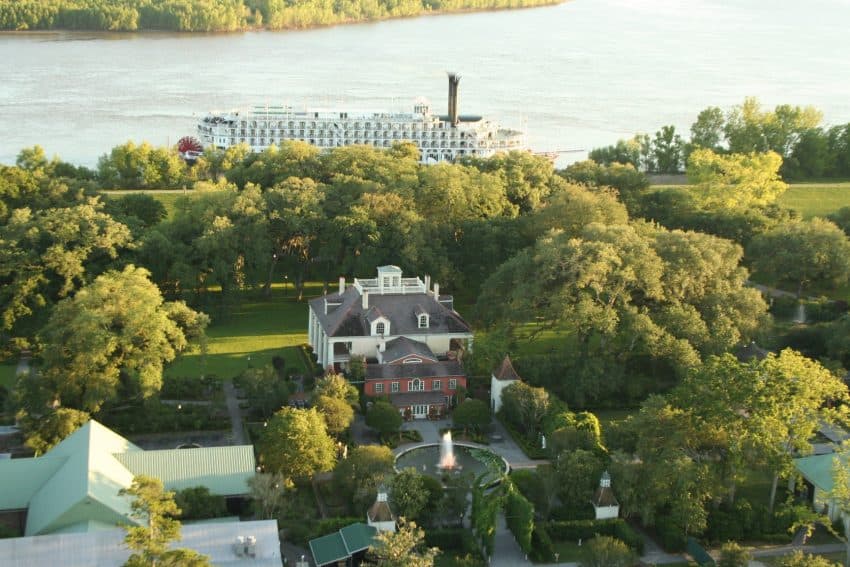 Exciting times are just around the bend of the Mississippi River at Houmas House plantation in Louisiana.

With the crack of a bottle of champagne against steel girders and the release of butterflies on a splendid spring breeze, Houmas House Estate and Gardens (on southern Louisiana’s River Road) welcomed another exciting chapter in its 244+-year history: the advent of its new Louisiana’s Great River Road Museum and Interpretive Center.

The 28,000-square-foot museum is also home to an outdoor amphitheater, a Great Hall, and indoor and outdoor event spaces, with seating for more than 800 at sit-down dinners, 1,200 at cocktail receptions, and 2,000 at concerts.

Stroll Along the River

A walkway and bridge leading to a promenade atop a levee allow guests to spend time strolling alongside the Old Man River or sitting on a bench beneath street lamps.

At the new facilities, the local community and visitors are now able to enjoy grand graduation celebrations, glittery galas, and elegant weddings, as well as learn about life along the Mississippi.

Lieutenant Governor of Louisiana Billy Nungesser and other distinguished guests gathered with plantation owner/businessman Kevin Kelly, for a “topping off” ceremony back for the new museum, which the not-for-profit 501c3 Houmas House Foundation, along with national and federal programs, are now building along Louisiana’s famed River Road, a slender byway along which a dozen historic Louisiana plantations still stand (tours of all of these are available year-round).

There’s already so much to do and see at Houmas House plantation now that you’ll want to spend at least half a day here.

Springtime and early summer are spectacular seasons in Southern Louisiana, and these are the perfect time to enjoy the gardens of Houmas House, just 50 miles outside New Orleans and about 25 miles outside Baton Rouge, easily accessible by car or tour bus (picking up guests at most New Orleans hotels).

Even some days in January may be warm enough for short sleeves.

Standing for centuries beside the Mississippi, this immaculately restored and preserved plantation estate is shaded by the enormous branches of ancient oaks, swept in garlands of ethereal Spanish moss.

Set on 38 acres alit with butterflies, the Houmas House gardens are filled with the fragrance of budding magnolia blossoms and sweet olive trees.

Awash in stands of pink azaleas and cornflower blue plumbago, its garden paths are tranquil and picturesque, providing a shady place to catch a cool breeze off the Mississippi, even in the hot of summer. Master gardeners and those who simply enjoy a walk in the garden find this a favorite Louisiana attraction and tend to return several times a year.

In front of the antebellum mansion, a reflecting pond mirrors the house’s Tara-like columns, while near the entrance to the estate, an arched footbridge spans a Giverny-inspired pond filled with waterlilies and lotus blossoms.

Hardy irises, delicate orchids, and sturdy elephant ears surround walkways and garden benches throughout the property, and fountains spray a mist of cool water into wind, while in the distance a bell rings signaling the start of another house and garden tour, taking place every 15 minutes.

Although the gardens are remarkable, the mansion always steals the show. The columned Greek Revival home, whose main structure dates back to 1803, adjoins and encompasses earlier homes built there, including an early French settler’s cabin built in 1774 and a cottage built in 1803.

Filled with elegant period furnishings (some being original to the house) and ornate historically accurate décor that the owner has carefully curated over the years, the mansion is an exquisite showplace.

Kelly spared no expense in restoring it in a tasteful and elegant fashion that is true to the history and spirit of the estate, which was for centuries an enormous sugar cane plantation. For this reason, Houmas House is often still called Louisiana’s “Sugar Palace.”

Every 15 minutes, with the ringing of a large outdoor bell, tour guides in period costume welcome guests to tour the house wherein thrilling storytelling they bring to life the history of the home and the plantation and the free and enslaved people who lived there.

Named for the Houma tribe of Native Americans who lived on the spot, Houmas House was once the largest sugarcane plantation in the South. In 1528 the Spanish explorers first came to what is now Louisiana when an expedition led by Panfilo de Narváez located at the mouth of the Mississippi River.

The French first colonized the land in 1682, and in the early-to-mid 1700s, it was a homestead for French settlers attracted by fertile riverbank soil, surrounded by forests of Cyprus trees and an abundance of wildlife for hunting.

However, the land became a possession of Spain after the Seven Years’ War in 1763, and then in 1800, France reacquired Louisiana or “New France” from Spain in the Treaty of San Ildefonso.

But by 1803 the Louisiana Purchase finally made the land part of the United States.

Largest in the USA

During the 1800s, the Houmas plantation was the largest in America, comprising 365,000 acres (about 1,000 square kilometers) and producing 20 million pounds of sugar a year.

Today Houmas House Estate and Gardens is known for its elegant “Gone with the Wind” Tara-style antebellum columns and the oak trees that line a path to the mansion’s porches and oversized front door. Many couples choose to hold their weddings here and have wedding portraits taken on the porch or in the gardens.

In 2003, Kevin Kelly, a New Orleans businessman, purchased the mansion and surrounding grounds and began the task of restoring the mansion and gardens and adding other buildings to the already spectacular property.

Kelly once visited the property and threw a coin in a fountain wishing someone would buy and restore Houmas House, not knowing then that he would one day be the one to do just that.

“Having undergone nearly 250 years of construction and remodeling by various owners, the mansion reflected a multitude of styles, and it was impossible to restore the house to a definite period without sacrificing elements from other important periods of its history,” says Kelly, “So I decided to select the best features from various periods to showcase a legacy of each family that had lived in the mansion.”

Many of the old plantation houses along River Road are lovely and worth a visit, but for me, none comes even close to the splendor and opulence of Houmas House.

Not so at Houmas House, where Kelly has meticulously restored the property, offering visitors a five-star, first-rate experience.

Perhaps Kelly cares so much for the mansion and gardens because, like the owners over the past 200 years, Houmas House is his home. In fact, his bedroom is even part of the house tour.

While visiting the second floor, also be sure to ask about Bette Davis, Joan Crawford, and Olivia de Havilland and the feud that took place at Houmas House plantation during the filming of the 1964 movie, ”Hush, Hush, Sweet Charlotte.”

That is but one of the many movies filmed there. You can even see the bed where Bette Davis slept.

But Houmas House offers more than just a glimpse at a rich and remarkable past, it also offers modern-day amenities, like a large gift shop visitors, love to peruse and the dark and inviting Turtle Bar, where guests can sip a Southern mint julep or a Coca-Cola.

There are also several inviting restaurants on-site, all under the masterful direction of chef Joseph Dicapo, including an intimate, romantic fine dining experience Latil’s Landing in the historic French house section of the mansion; breakfast or a casual evening dinner in the airy and elegant Carriage House restaurant; a garden courtyard lunch at Café Burnside; as well as time to enjoy the fruits of the vine in the impressive Wine Cellars of Houmas House.

The Inn at Houmas House also offers six multi-room luxury cottage suites for five-star stays along an alley of oak trees set on the edge of the estate.

My husband and I recently spent the day at Houmas House and spoke to owner Kevin Kelly, who couldn’t be prouder of all the dreams he’s seen come true there in the 15 years since he purchased the property:

“The creation of the Great Mississippi River Museum and Interpretive Center, Amphitheater, Great Hall, and Steamboat Overlook promenade along the top of the Mississippi River levee has been a dream of so many for so long, and it’s exciting to see it all finally come true.

“It has been a journey of eight years to get to this point, but it is only the beginning. The hard work of collecting the artifacts to be displayed, and researching each and every item to be exhibited, and to be able to tell the accurate story of the artifacts is part of that ongoing journey, as we work to document the history of the River Road and the great Mississippi River.

“We are grateful for the creative talents of designer Jimmy Blanchard here at Houmas House, too, as his design creativity and his love for the project can be seen every day in everything we have built here, especially as construction moves on.

The journey is to tell the River’s stories in a clear concise manner yet be entertaining. And because it is Houmas House, the expectation is for it to be beautiful and well-designed, so of course, it will be stunning.”.