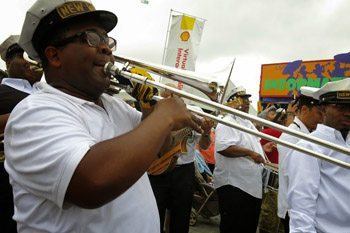 A group of millennials in the bar of Loew’s New Orleans Hotel clink their glasses together and toast, “To the Jazz Fest.” They’re here on a Loew’s Girlfriend Getaway package.

Right now, I’m here alone, but I have two NoLa friends, one who will join me tonight, and the other who will lead me on an insider’s look at the Jazz Festival tomorrow. The festival is held over two weekends every April.

My spacious room overlooks the Mississippi River and I look out to see a cargo ship cruising up river and a ferryboat returning to the dock. I am mesmerized by the river traffic and could stay here forever and watch, but I’m starving so I head to Felix’s, my go-to oyster bar heaven. I start off with a dozen Gulf oysters, then a mixed plate of Oysters Rockefeller, Bienville, Chargrilled, and Chef Chris Hayes’Oysters du Jour which today, is oysters and grits.

Every Thursday from 4-8pm, Louis Armstrong Park (on the edge of the French Quarter and where the Nola Jazz Fest originated in 1970) serves up free “Jazz in the Park.” I listen to a set before meeting my friend Lauren for dinner at Root Squared, upstairs from award-winning Square Root. Rock star chef/owner Philip Lopez serves a 15-course tasting dinner downstairs, but this evening we plan to see Dr. John at Tipitina’s, so we instead we head to the upstairs terrace and share shrimp stuffed deviled eggs, blue crab and grapefruit, and pickled beet and beet-coffee-cured salmon.

Tipitina’s, easily Nola’s most famous music club, began in 1977 as a neighborhood juke joint for Professor Longhair to perform. Longhair, who had a unique sound, influenced the Neville Brothers, Allen Toussaint and Dr. John, whom I have loved since I was in my twenties.

His version of Iko-Iko is one of my all time favorite songs. Lucky us, because that’s the song he opens with at Tipitina’s where we stand squeezed in like sardines. Who cares? We’re less than ten feet from the stage and the great “Night Tripper.”

The next morning at 10 am, I meet my friend Kristian just a few blocks from the Fair Grounds Race Course where the Festival is held. The gates don’t open until 11am, but the locals start their party early, he tells me.

Someone near the intersection of Ponce de Leon and North Lopez Street tosses us coozies. Another man is selling a type of coozie worn around the neck like a lanyard.

It is 10 in the morning, but already, the local bar, Liuzza’s by the Track, is jammed with revelers ordering Bloody Mary’s, screwdrivers, and beer.

Outside on the street, a 5-piece brass band plays second line music. The second line, Kristian explains, is the line of people behind the first line of mourners. They follow the band to enjoy the music and sometimes twirl a parasol or handkerchief in the air – pretty much a jazz funeral but without the body.

The parades are sponsored by members of Social Aid & Pleasure Clubs, originally formed by African Americans during the early 20th century. As they were not allowed to buy insurance, they formed mutual aid societies to help members through tough times. For me, seeing a second line parade is like watching the TV Series Treme, except this is live!

The Jazz Festival not only has daily second line parades, but also Mardi Gras Indian parades, food, crafts, and 12 stages with every type of music you can imagine: Cajun, zydeco, Afro-Caribbean, folk, blues, R&B, gospel, country, bluegrass, jazz, Klezmer,and brass bands. With so many choices, it’s often hard to chose, so some people (like me) flit from stage to stage to catch a little piece of many bands.

It’s on a Racetrack

Kristian gives me the lay of the land: we are on a racetrack, and even though all the bands are inside the track, the fastest way to get from point A to B is not by cutting through but by walking around the track. We enter the Grandstand and Clubhouse.

Most people don’t realize it’s open during the Festival, he says. But the Lagnappe Stage is here in the paddock area with bands playing all day.

The Clubhouse restrooms are clean and with no lines, unlike the port-o-johns elsewhere on the grounds); here, the beverage lines are short and they serve Budweiser and also Pilsner Urquel beer (not served elsewhere).

The second floor of the Grandstand holds another stage where stars do live radio interviews and often give impromptu concerts (as Keith Urban does when he whips out a banjo and plays during his interview).

As we walk towards the food stalls, I look at the Festival schedule and count up the number of bands playing today: 70! Seventy bands in one day! That calls for some food, so we head towards the food area. With the exception of the occasional bicycle selling ice-cream sandwiches from the basket, the food stalls are all in one area.

Kristian points out that most people don’t realize that there are two major food stall areas (and a total of more than 50 stalls), so if one area is crowded, just head around the track for more Po’ Boys, shrimp creole, BBQ chicken, pulled pork, pralines and every other specialty NoLa offers.

This is not your typical festival fare; the chefs here take pride in making the food reflective of Nola and Nola’s culture. Nola, Kristian explains, is a port city whose food, music, language, architecture, and laissez-faire attitude, came from the people who settled here: Europeans, especially French, African Americans, native American Indians, Haitians, Spaniards, Cubans. All these people arrived on the shores and mixed together.

We walk around the track and stop to look at the crafts area filled with sculpture, paintings, and jewelry created by major artists. You don’t bargain here, Kristian says, but you can ask them to ship for free (a gorgeous folk art sculpture will soon be coming to my home — shipping free).

I ask Kristian, what if he wants to see one band and I want to see another. How do we find each other. You text the name of the stage, the gate number, and your location, he says; for instance, you might text: Gentilly Stage, Gate 26, in front of the speakers.

I notice that many people are wearing rubber boots even though it’s around 80 degrees. “This is a racetrack,” Kristian says. “It’s bound to be muddy.” Others are wearing Tevas because they wash off easily. I’m wearing sneakers, but they’re my old ones, so if they get too muddy. I’ll simply throw them out.

We sample Po Boys, Crawfish Etoufee, Gumbo, Jambalaya, and more. We listen to bands, we dance, watch parades, join parades, drink beer, eat more, and listen to band after band. Kristian, like the other locals, has brought two portable chairs, so we’re never without a seat at the outdoor stages (the tents have their own seats).

We’re even prepared when it begins to rain. I’ve brought a poncho with a hood, which keeps me dry. (Other essentials to bring are sunscreen, a hat, and sunglasses, all of which will fit in a small backpack so your hands will be free to clap).

That afternoon, it rains and there’s lightning everywhere, and at 6:15, they are forced to cancel the last 45 minutes of the festival. Not a problem. I’ve seen so much good music in one day and I’ll be returning tomorrow. I board the shuttle bus, which runs to and from the Festival all day long; the lines for the shuttle are huge, but there are dozens and dozens of buses, so the line moves very quickly (there’s never more than a 10 or 15 minute wait).

On my way to my room back at the hotel, I pass a room with an open door – the same girls who were at the bar yesterday are there, laughing and shaking up martinis from their “Recovery Concierge Kit,” part of their Girlfriend Recovery Package which, besides cocktail shakers (theirs to take home) includes Ketel One Vodka, cans of Doubleshot Espresso bottled water Emergen-C, Burt’s Bees lip balm, a Kind Bar and an Orbit gum pack.I change out of my wet clothes and head down to the bar carrying the festival schedule to decide which bands I want to hear tomorrow –pretty much all of them.

This article was created with assistance from New Orleans tourism, but the opinions are my own.