The City of Light and the City of Angels
An artistic pairing of two iconic cities, Paris and Los Angeles

There are certain nostalgic charms to Paris and Los Angeles that cannot be found elsewhere. Landmarks such as The Eiffel Tower and the Hollywood sign immediately conjure up feelings of adventure and discovery; they are places where dreams come true and nightmares never happen.

Everyone wants to go to Paris and every youth wants to escape to Los Angeles. Why LA? Pourquoi Paris is a celebration of these two great cities.

While at first glance, the two cities might seem to be miles apart (literally and figuratively), they share more in common at a second look. The generality surrounding Paris is stiff and formal; its food is delicious and its wine is better, and everyone wears a tux or a gown.

LA is the exact opposite: bathing suits are typical daytime attire and the main culinary attraction is In-N-Out Burger with a cheap craft beer. 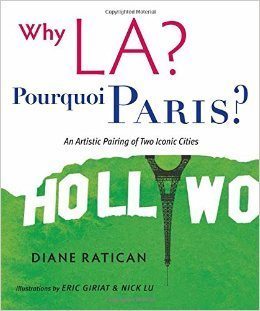 While they might be strikingly different in some respects, both cities are the epicenters of social movements and powerhouses in the entertainment industry.

What happens in Paris and LA is felt around the world. Both cities are social trendsetters; where influential magnates flock for a popular stage. The poor and wealthy alike can appreciate each city’s glamorous appeal.

Diane Ratican compares the City of Light to the City of Angels in a simple and minimal fashion in her book Why LA? Pourquoi Paris? An Artistic Pairing of Two Iconic Cities, that is easy to understand and fun to read. Gorgeous illustrations by Eric Giriat & Nick Lu bring her words to life in the same minimalistic manner.

She contrasts the two cityscapes as well as cultural facets such as entertainment, fashion & style, leisure, arts, shopping, and cuisine & dining.

An Excerpt About Paris

“The city is thought by many to have the best cuisine in the world. If there is one thing Parisians care about, it is their food… French haute cuisine is a cooking style that became famous in the 1900’s. It is primarily a Parisian phenomenon and is best described as the meticulous preparation and presentation of food and wine…

…When you think Paris, think wine and cheese. Parisians love their cheese, and over 500 varieties are available in the many fromageries (cheese shops) in the city.

A cheese course is an option on nearly every menu in every eatery, and every home is stocked with several varieties. French cheeses are truly special. Each cheese is distinct and appealing in its own particular way, whether aged and earthy or ripe and runny.

It is not possible to pass a cheese shop in Paris without smelling the pungent air outside the door. And coupled with the fantastic selection of local wines available, it is possible to experience a match made in heaven every day.

A growing number of venerated chefs have opened informal restaurants as a part of a pattern of changing tastes and social hierarchies. There is a convergence of the haute and the ordinary, and a mix of the best and the commonplace.

The rise of creative, improvisational cooking with authentic street food has had a dramatic impact on the food scene in the city. LA’s ethnic cuisine, including Mexican, Chinese, Korean, Japanese, Thai, and Indian, is authentic and a result of LA’s distinctive diversity.

Words From the Author

This unique book is about exploring Paris and Los Angeles, a mixing and pairing of yesterday and today, the monumental and the every day, the people and things, all shared through text and illustrations that tell the stories of these two very different, yet similar, cities.

These two cities have kept me intrigued and captivated for decades. Knowing them has given me the feeling that I am experiencing something greater than the sum of its parts, and I want to share that overwhelming discovery with you.

She started her career educating gifted children and then moved on to become a risk-taking entrepreneur. This background uniquely prepared her to engage in this latest endeavor, as a writer, conjurer of images, and artistic director.

Nick Lu is a graduate of Art Center College of Design in Pasadena, California, with a degree in illustration. Nick is currently living in Los Angeles and working as an illustrator. Nick spends most of his time dreaming up interesting, eclectic things for his clients; notable clients include the New Yorker, Wired, Boston Globe, PlanSponsor, Bloomberg View, Hohe Luft magazine, Playboy jazz, Poketo, Riney Advertising, and Macmillian Children’s Publishing.

Beginning with serial illustrations for the French edition of ELLE magazine in 1996, Eric Giriat has since flooded the magazine, advertising, and book publishing industries in many fields internationally, from fashion to economics, politics, psychology, children’s books, interior design, the luxury industry, culture, and portraits.

Stalking the Wild Tapas of Santiago de Compostela, Page Two
France: Finding Peace on the Cote d'Azure
Charleston's 19 Broad Street: Where It's At
Backpacking 101: Travel Advice for the Adventurer
New Orleans: The Haunts of the Literati
Paris: Following the Trail of the Writers of the '20s andychristian.net
Like this article? Share it with your friends!
If we've inspired you to travel with this story, why not check out the prices to get there and make it happen. Search airfares, hotels, and rental cars here. Thanks!