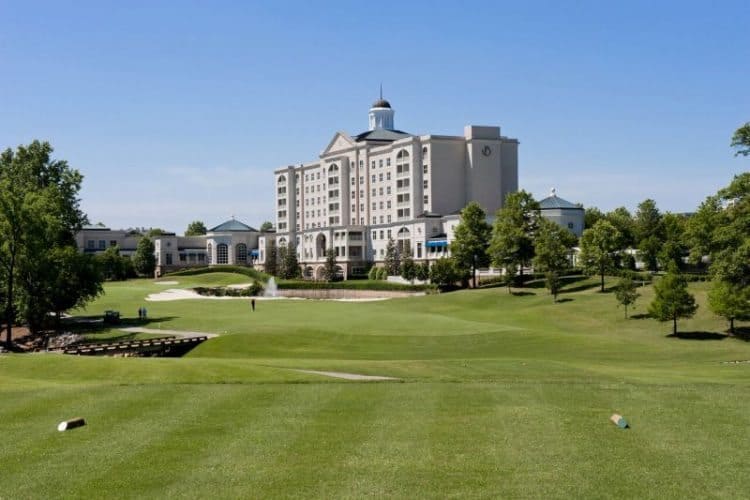 Charlotte, NC: Where Southern Charm Oozes and the Food is Delicious 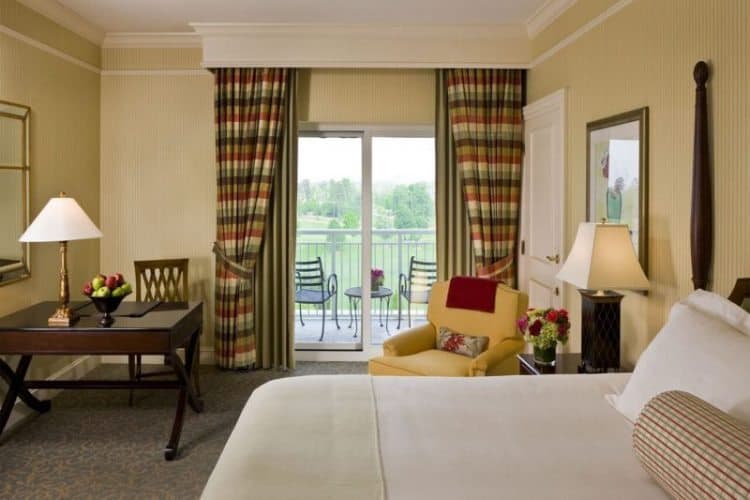 Starwood property where President Obama stayed. Well appointed in the classical Southern manner, it reminded me of Tara, I imagined descending the giant spiral staircase beneath the chandelier, just like Scarlett O’Hara.

Our Grand Deluxe room was spacious and comfortable with a bed whose mattress was so high I almost needed Jamie to give me a boost up. As I lay on top of the plush duvet, I felt like a queen — not surprising, as Charlotte takes its name from Queen Charlotte, wife of King George III.

The bathroom was large with a 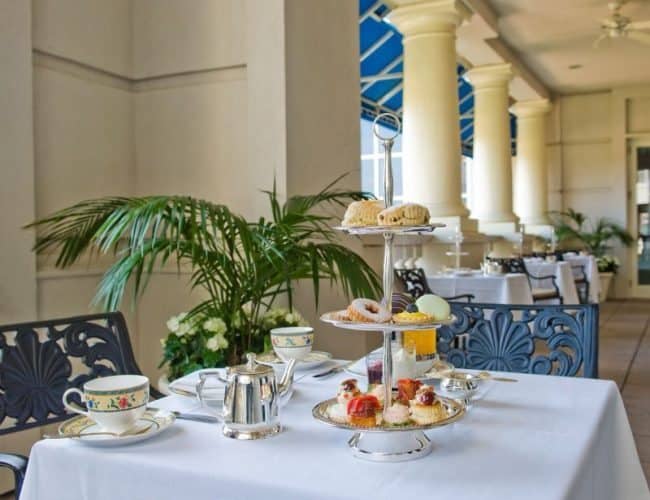 beautiful tiled floor, spacious bathtub, and separate shower. The bath products were Elemis, one of my favorites, and there were enough fluffy bath towels for at least four people, plus terry robes and slippers. There was a mini bar, coffee maker, and two free Dasani that were re-stocked daily.

The windows overlooked The Ballantyne’s 18-hole championship PGA golf course. The Ballantyne is also home to the Dana Rader Golf School (the Carolina’s only Golf Channel Academy), but I don’t play golf.

However, I love to run golf courses early in the morning, long before the players tee off, so I was in heaven running through the trees, across wooden bridges, around water features, and up and down the paths alongside the manicured greens and past the tennis courts.

Jamie, who prefers the gym, could take advantage of the well-equipped fitness room. He didn’t try a personal trainer or take any of the classes including yoga, Pilates, sculpt, Zumba, boot camp, or belly dancing.
There was a full-service spa offering over 100 different treatments, a hair and nail salon, indoor and outdoor pools, two resistance lap pools, Jacuzzi, and saunas.

We’d planned to try the Ballantyne’s traditional afternoon tea with tea sandwiches, pastries and a choice 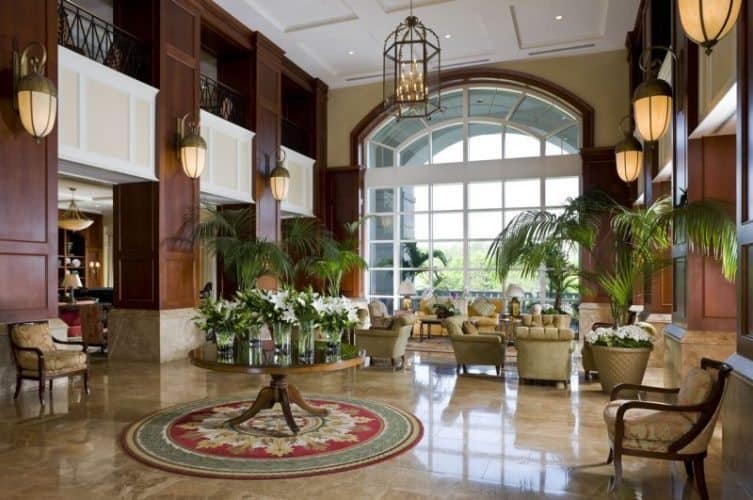 selection of teas, but we always arrived back at the hotel too late for tea.

Nor did we sip cocktails in either of the two bars, one with a most prestigious collection of single malt Scotches. But we did dine at Chef de Cuisine David Moore’s Gallery Restaurant (Charlotte’s only Forbes Four-Star dining establishment, where both the food and the staff were outstanding. The seats in our booth were plushy padded in loden green velvet.

No sooner had we sat down than a waiter was at our table, replacing our white napkins with black ones.

When I asked why he was doing this, he explained that when guests are wearing black (and we were), they always exchange the white for black napkins so no one ends up with lint on their clothing.

And when the waiter returned to pour water, he held out a tray of cut up lemons, limes, mint and cucumbers – of course, I put one of each in my water.

As we wanted just about everything on the menu, we decided to do a kind of chef’s tasting. We choose our wine from an Ipad of over 300 different labels. Our waiter started us off with an Amuse bouche: a tiny espresso-sized cup of butternut squash soup with toasted pumpkin seeds. Delicious. For my appetizer, I chose a roasted beet salad with Adirondack potato and caviar cream, cured egg yolk, roasted rice vinegar reduction.

Jamie decided on the French Onion Soup with Guinness soaked Gruyere and focaccia crostini. And then, because we’d never tried it before, we chose other appetizers: bone stock braised Niman Ranch lamb cheek and Hudson Valley Foie Gras.

What to Do in Charlotte – Especially Food

There is so much to explore in Charlotte such as the NASCAR Hall of Fame, the Mint Museum, the Bechtler Museum of Art, and the 4th Ward Historical section – the best way to check out the city’s offerings is at: www.charlottesgotalot.com While we’ve seen many of Charlotte’s cultural sights, our meal at Gallery Restaurant whet our appetite for more tastings. A little over ten years ago, the culinary school Johnson & Wales, relocated from Charleston to Charlotte and created a dramatic food scene makeover.

In the last year, more than a dozen new restaurants have opened, and while we wanted to try them all, we decided to let our family, Katie (Jamie’s daughter), her husband Neal Emmons and their two daughters (our grandchildren) lead the way. First stop: their favorite donut place.

Duck Donuts in Kenilworth Commons makes cake donuts fresh, as soon as you order. Watch the dough go through a machine which turns it into round donuts, then go through the baking process and come out bare and steaming, the way Katie and Neal like them.

Their daughters, Grace and Olivia, prefer chocolate-dipped donuts with rainbow sprinkles. Jamie went for peanut butter icing with chocolate sprinkles, and I chose the famous Maple Bacon donut (a maple-dipped donut with bacon sprinkles), like eating pancakes with bacon – delicious. 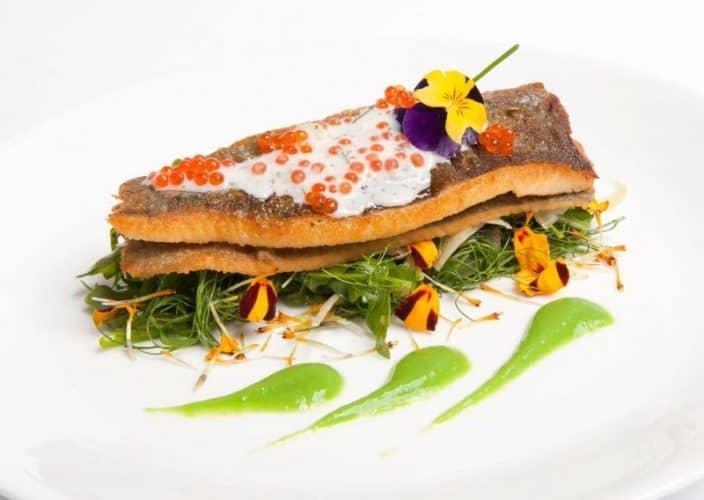 One cannot survive by donuts alone, and Katie and Neal have a couple of other favorites. Katie says the best guacamole she’s ever had is at Bakersfield Tacos and that’s saying a lot since she and Neal ate Mexican food regularly when they lived in Texas.

Where Else to Eat in Charlotte

As far as the newish restaurants, the following will have you returning for more:
Stagioni: set in a 1920’s mansion, the third restaurant of Bruce Moffet, and offering eclectic, authentic Italian cuisine such as Charred Octopus with tomato vinaigrette and olive tapenade and ricotta Cavatelli with red peppers, fennel sausage, parmesan and tomato brood.

Fahrenheit: This new hotspot from rising star chef, Rocco Whalen (a Wolfgang Puck protégé, and featured in Esquire as a “Chef to Keep Your Eye On,”) dishes out inventive new contemporary cuisine with Mediterranean and Asian accents topped off by a drop-dead view of Charlotte’s glittering skyline from every table.

littleSpoon: Here, the chefs aren’t trying to reinvent the wheel, but they get bor 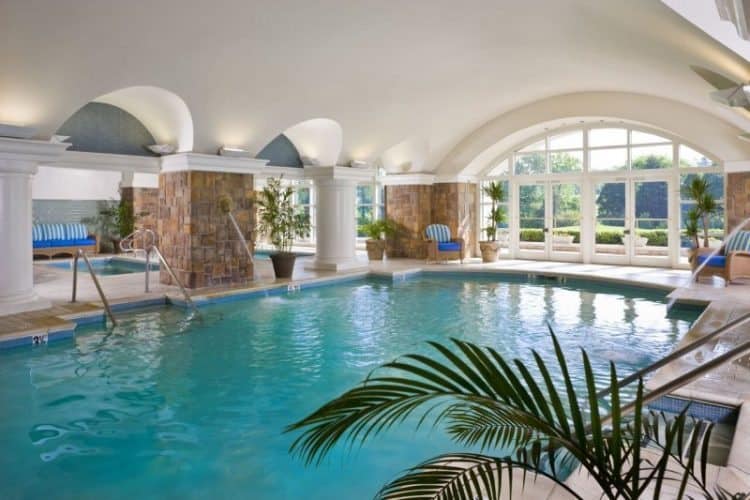 ed easily and want to keep the food really fresh, so their menu of locally grown produce and protein is constantly changing. Get it while you can, as it might not be on the menu tomorrow, the chefs say. The food is healthy when you want it and decadent when you don’t, from short ribs to jerk chicken lettuce cups.

And when you’ve satiated your palette, remember that Charlotte is a drop-dead beautiful city with scores of green parks, so be sure to check them out. The nice thing about QC (Queen’s City, as it is often called) is that it’s close to both the mountains and the beach, great for couples, friends, and families, and one of America’s most friendly cities.

The Ballantyne Hotel and Lodge is in Ballantyne, North Carolina, an upscale 2,000-acre neighborhood located 18 miles from Charlotte-Douglas International Airport (CLT) and downtown Charlotte. Nine miles north of the resort is SouthPark Mall, a premier retail destination with Neiman Marcus, Tiffany, Nordstrom, and more than 100 other shops.