Terceira Island in the Azores, a Magical Mystical Place 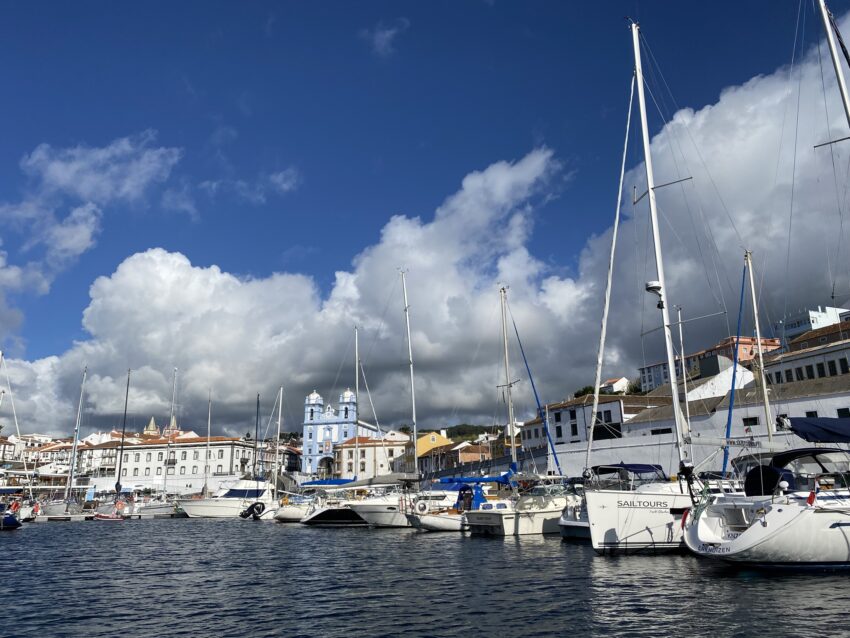 “You’re my daughter’s worst nightmare,” said the woman at the gate in Boston as we waited to board a plane for the Azores Islands.

“Excuse me?” I said, startled.

Until that moment I thought this nice lady and I had been enjoying a pleasant conversation.

She’d been telling me all about how much she and her family loved the Azores Islands, where they’d lived while her husband was stationed there.  However, when I mentioned that I was a travel writer, she made this odd remark, and her two teenaged kids spun around in their seats.

“You’re a travel writer?” screeched the daughter. “Please don’t write about our magical, secret place! We want to keep the Azores to ourselves!”

Her brother chimed in, “I’ll pay you not to write about it!”

They burst into laughter.

Turns out, they all love the Azores so much that they’re afraid the rest of the world will soon discover how wonderful it is and ruin it with too much tourism.

“Most people don’t even know where the Azores Islands are, and that’s fine with us,” the dad said, smiling. 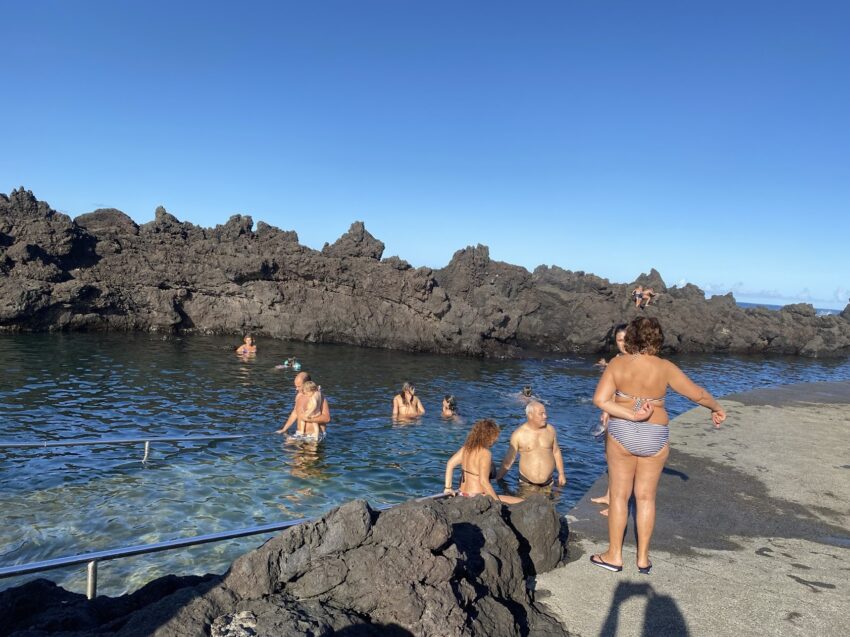 Where are the Azores anyway?

I must admit, I hadn’t known much about the Azores either until I’d been invited by Boston-based travel partners ZeniTravel to join a group of journalists on a tour of two of the islands, Terceira and São Miguel.  All I had known was that the Azores were an archipelago in the North Atlantic and an autonomous region of Portugal.

Draw a line between New York and Lisbon, about one-third of the distance away from Portugal and two-thirds the distance from the United States, and that’s where they are. That’s why the flight from Boston takes only five hours.

With volcanic mountains rising from a cobalt sea, islands in the photos look like Hawaii. However, the family at the airport said in some places it also looks a lot like Ireland or Scotland: high hills and green fields, sheep and dairy cattle, stone walls and small villages, and spectacular cragged coastlines.

But with volcanic peaks, caverns, waterfalls, hot springs, forests, and lush flora and fauna sweeping across sun-kissed islands, surrounded by sparkling seas, I found a comparison to Maui was not a stretch.

Some ancient mariners once believed the Azores to be the mountain peaks of the now-submerged mythical continent of Atlantis. There are even early accounts of Arabian sailing ships driven back by perilous seas surrounding volcano-filled atolls. Ancient art depictions show spouting geysers and flaming volcanic peaks.

Legends tell of islands suddenly lifting themselves out of the ocean and then disappearing again from view. In “Folklore of the Islands,” the authors write that the Azores “… Could be nothing else but enchanted… islands and mountain peaks suddenly vanished away from one’s sight! Surely the Azores must be the true land of magic.”

As much as my new friends at the airport wanted to keep that magical place to themselves, they couldn’t help but gush about it.

“You have to return in the spring and summer when the islands are covered in wild hydrangeas. They’re everywhere in so many vibrant colors. It’s heavenly!”

Terceira (or “third island,” as it was the third of the nine islands to be discovered) is home to ancient earthen temples and tombs found dating back 2,000 years or more. Early nautical maps of the Atlantic dating to 1325 chart these islands. However, officially Terceira Island is considered to have been “discovered” (or more accurately, rediscovered) in the mid-1400s, although some Portuguese records maintain it was discovered on January 1, 1345, by the pilot of a ship of a Portuguese monk/explorer.

I discovered Terceira island’s beauty the next morning, when after a comfortable, clean, non-crowded Azores Airlines flight, I arrived in the city of Angra do Heroísmo (“Cove Heroic”) of Terceira Island. A ZeniTravel host met our small group at the airport with a luxury bus.

Passing by green hills and valleys dotted with sheep and cattle, land crisscrossed with handsome hand-stacked stone walls, I  understood why some said it looked like Ireland. In fact, I was surprised how little that part of Terceira looked like Hawaii.

Still, it was stunning, and as the morning fog began to lift, I beheld giant overgrown bushes of hydrangeas along the road. Although blooms were fading with the fall, they were still lovely to behold.

We arrived in the town of Angra do Heroísmo with its slender cobblestone streets. Colorful shops and white-washed homes stood along narrow lanes with little room for foot traffic, let alone buses.

I couldn’t see how our bus could round the corner, but almost magically it did and parked in front of the newly constructed Zenite Boutique Hotel & Spa. This new hotel with its sleek décor was flawlessly designed to seamlessly integrate into the classic traditional architecture surrounding it.

Although Hotel Zenite a few blocks away, offers fine three-star lodgings, our group was also pleased to be able to stay at the new Zenite Boutique Hotel and Spa, a four-star+ space with a gleaming lobby. Nautical maps on the wallpaper and carpeting were a nice touch at reception and throughout the hotel.

In the lobby, a large golden chandelier hangs like a gleaming mobile, an art installation reminiscent of the precious metals mined and carried on ships from the port nearby. My room was clean and stylish with a spacious bathroom. A large floor-to-ceiling window overlooked a patio set below street level, connected to the restaurant.

On a lower floor, a full-service spa, fitness center, sauna, steam room, and indoor and outdoor pools were a welcome find in such a small but spectacular hotel. It’s not often one finds such a fashionable new place in the heart of such an ancient city.

Zenite Boutique Hotel and Spa stands just a few short blocks from the high street in the historic city’s central zone, which became a UNESCO World Heritage Center in 1983 for its historical and architectural significance.

Angra do Heroísmo, or Angra as it’s called, is a colorful village set on a high hill overlooking a picturesque coved marina. In the bay, two enormous rock outcropping islets emerge like magic mountains from the water’s mist.

A Beautiful Day in the Terceira Neighborhood

For the next three hours, we enjoyed an easy-paced walking tour of the city and marina, stopping at spots like the ornate salmon-pink opera house and performing arts theatre, Teatro Angrense, and a little pastry shop nearby. We also visited Angra’s 16th-century cathedral, Sé Catedral de Angra do Heroísmo, or “Cathedral of the Holy Savior,” featuring three arched porticos and two bell towers.

Inside, each Station of the Cross was adorned with contemporary Modern Art paintings. We also passed a sunny central plaza and a tiny farmer’s market. A man sold warm chestnuts on a cart, and the scent was intoxicating, as were the fragrant flowers of the nearby Duque da Terceira Garden, on the grounds of the former Baroque-era Convento de São Francisco, now the Museum of Angra do Heroísmo, our next stop.

We also visited the General’s Palace, with its large rooms and fine artifacts, as well as the town’s 19th-century City Hall. Later, after enjoying an espresso in an outdoor café, we strolled downhill to the marina to behold the beauty of the sea.

There, a little ice cream shop and marina café serves handmade gelatos, including one flavored with goat cheese. We then hiked a high hill to the ruins of an ancient maritime defensive bastion, Fortresses of Angra Do Heroísmo.

Like the streets of Portugal, stones set in mosaic patterns of charcoal and white adorn some of the plazas and avenues of Angra. Houses and shops are pink, white, and blue—colors of hydrangeas that line the roadways. The city centre is pedestrian-friendly, and it’s an easy hike from the water’s edge up to the town’s highest points.

The most colorful structures on Terceira were the little Holy Ghost chapels that dot the villages across the island. Approximately 68 little ornately painted Impérios, (or “empires”) of the Holy Ghost (also known as Teatros or “theatres”) date from the late 19th century, replacing earlier wooden structures.

Each evening after a day of sightseeing, our little group met in our hotel restaurant for a delightful meal. Steak, chicken, pasta, and fresh seafood filled the menu.

Cod is popular on the island, so I often enjoyed the chef’s preparation of that, along with fresh greens and local vegetables, followed by divine desserts served with tiny digestif glasses of sweet pineapple liqueur made in the Azores.

I loved the bread made fresh daily: a sweet dough baked in the shape of an English muffin. Local cheeses were also delicious, so one afternoon we stopped at the Queijo Vaquinha Cheese Factory to taste the oldest cheese produced on Terceira.

During the day, we’d often have lunch at local spots overlooking the sea, where we’d enjoy fruits de mer, like limpets (much like clams or mussels) and even barnacles dripping in rich garlic butter sauce.

One of our favorite stops was to see the caverns and ancient volcanic vent and chimneys of an extinct volcano, Algar do Carvão . This was one of the most stunning spots on the island and is surely is a not-to-be-missed site. However, my favorite excursion was wading in the natural swimming pools of Ponta dos Biscoitos, a shoreline marked by giant black-lava volcanic rocks forming natural pools where locals like to splash and play.

Best Day Ever on a Boat off Terceira

Every trip has its surprise and highlight, and on my last morning in Terceira, I found mine. My group and I donned life vests and boarded a large high-speed Zodiac boat.

Holding on to metal bars before our saddle-like seats, we were thrilled as the boat jetted out to caves and slot canyons cut by water and wind into volcanic rock mountains.

Some decided to swim in the deep clear waters where we could see starfish clinging to rocks. Others simply enjoyed the magnificent views of white-clouds gleaming against cerulean skies before a backdrop of the colorful hillside town of Angra.

The Azores were indeed marvelous. Like Brigadoon, their lush volcanic mountains emerging from the sea, rising and disappearing in the mist, ever magical, ever enchanting.

The next day our group flew to São Miguel Island, where new adventures await, like visits to a pineapple plantation, hot springs, and the village of Furnas, where our lunch was cooked in the ground by the thermal steam of volcanos.

I now understood why the sweet family at the airport wanted to keep these best-kept-secret Atlantic islands all to themselves.