They Don’t Want to Talk About it – But We’re Glad They’re Good At Cruise Line Security!

They are some of the first crew members you meet on board your cruise ship, some of the last – and during the cruise, while pretty much ubiquitous, are largely invisible.

All smiles and polite efficiency when they take your photo for your Sail and Sign card, all unctuous regret as they hold on to your “contraband liquor” until the end of the cruise.

A bit more businesslike as they civilly but firmly request that you step back through the metal detector, or stand aside with your arms held out as they wand you for a more thorough screening.

They are cruise ship security – and while the various cruise lines have taken different routes in the wake of 9-11, sensationalized terrorist attacks and even high seas piracy – the end result renders passengers safer and yes – more secure.

Who is in charge of port security? According to U.S. Coast Guard Port of Seattle and Sector Puget Sound Foreign Vessel Inspections Branch Chief Lieutenant Krysta Zangle, the U.S. Coast Guard is in overall charge, but– they have a lot of help.

“When cruise ships are in port – depending upon MARSEC levels – security perimeters for ports and waterways – and even armed escort vessels come into play. All ships are reviewed on a six-month cycle.

We Know Who They Are

U.S. Customs and Border Protection Area Port Director (Seattle) Mark Wilkerson, concurs. “We receive passenger and crew manifests and screen every single one. We know who they are before they board, and before they get underway,” said Wilkerson. “We routinely cooperate on both ‘anchor’ and ‘underway’ cargo ship boarding exercises with the U.S. Coast Guard. 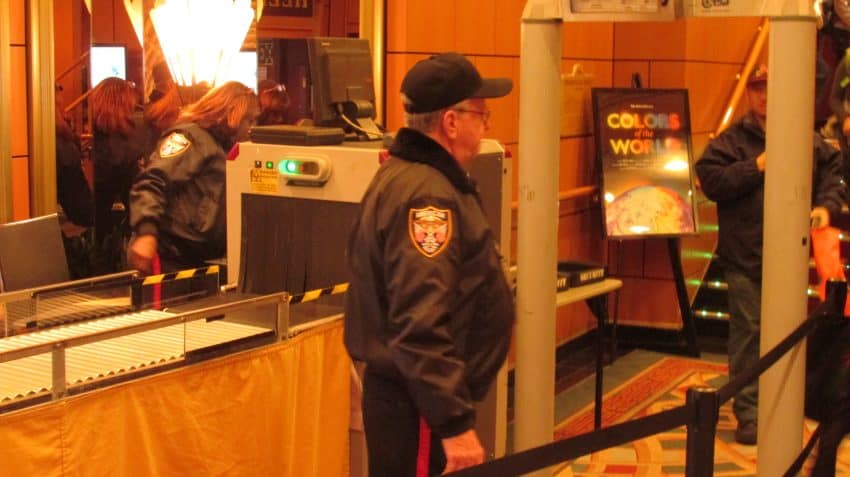 Maritime managers talk daily and meet frequently. We maintain a presence in the Joint Harbor Operations Center (JHOC), and strive for seamless operations.”  Yes, there is a “ton” of moving parts, but in the words of Port Director Wilkerson, “There are no credible gaps.”

Precisely how security is implemented on board ship also varies from cruise line to cruise line – but all comply with the parameters of ISPS code.

Norwegian Cruise Lines have drawn much of their leadership from Law Enforcement and Corporate Security backgrounds.

It’s more than gangway and ship access control – much more. Cruise lines take a zero-tolerance policy towards onboard crime. According to most cruise line security staff, interfacing with thousands of passengers and thousands of crew and hundreds of port facility employees is largely a matter of keeping honest people honest. After all, the passengers just want to enjoy themselves among luxurious surroundings in a safe and secure environment.

And for their part? Ship’s crew and staff, as well as port facility personnel, just want to provide superlative service, again – safely and securely. In the unlikely event that bad actors come into play – they are prepared to deal with that as well.

A complex network of cameras, infrared heat-source monitors, patrols, and investigative protocols deters, detects and deals with criminal activity. Captains can warn difficult passengers, suspend shipboard alcohol privileges, or put ashore anyone that poses a threat to others on the ship.

Brigs, (jails) are available to secure troublemakers or even suspected criminals until they can be handed over to port law enforcement, but often “cabin arrest,” with or without security staff posted in the corridor, suffices.

Contingency training, exercises, and drills provide successive layers of additional protection. It’s not so much about the likelihood of a terrorist threat – it’s the potential magnitude of catastrophe if such an unlikely event occurs.

Ships try to schedule exercises and drills during port calls, when passenger populations are down, but if you’ve cruised much, you’ve probably heard those cryptic announcements over ship intercoms: “This is a Red One drill – response teams are directed to Deck 12 mid-ship stations,” or “Alpha Teams deploy for action – this is a drill,” or similar vaguely reassuring and vaguely disturbing commands.

Yes – there is another side to ship security – one that needn’t concern passengers intent on a hedonistic week or two of total indulgence while being whisked from exotic port to exotic port before returning home refreshed, rejuvenated and maybe even planning their next trip. After all – you can’t help them, other than by behaving responsibly, staying aware of your surroundings and reporting suspicious activity.

They’ve got it covered, and their array of contingency plans to protect passengers are more effective when not widely publicized. Cruise line spokespersons are closed-lipped when it comes to onboard defensive arsenals, countermeasures, and capabilities.  “Rest assured we take the matter very seriously and are proactively engaged to ensure the safety and well-being of our ships, guest, and crew,” said Royal Caribbean Cruises Ltd Global Communications’ Owen Torres.

“We generally do not divulge or publicly discuss specific security protocols for a variety of reasons. The most obvious being that we do not want people with bad intentions to have any insight that would allow them to defeat our security measures.” Suffice to say – there are such capabilities and resources.

Picture a scene out of a pulse-pounding Hollywood action-adventure. Helmets, face screens, Kevlar-reinforced protective clothing, radios, strobe lights and weapons – up to and including Flash-Gordonesque sound projectors (“long-range acoustic devices”), pouring down corridors to deploy to the danger area.  Sometimes life imitates art.

They won’t talk about it, but from cruise line to cruise line and ship to ship, there is a tangible commitment and even a fierce pride among security staff and crew member auxiliaries – all of whom work long hours even without the added security components.

Seattle native Mike Howard has traveled extensively in Europe, Africa, Southeast Asia, South America, the South Pacific, and the Caribbean. Recently retired after a 30-year career in public communications and marketing, he is continuing his travels, sharing his experiences with fellow enthusiasts as a freelance travel journalist