Eurostar, the only highspeed train service directly linking the United Kingdom to both France and Belgium via the famous Channel Tunnel, has been buzzing passengers from city to city 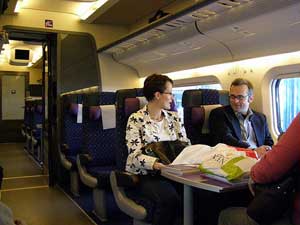 With direct service from the center points of various cities, Eurostar has not only eliminated the nuisance of low-speed travel but has also removed the inconvenience of transferring to city outskirts in order to access train stations. As we all know, the time-consuming part of air travel is getting to and waiting around at the airport.

Since their launch in the nineties, the line has successfully carried over 130 million passengers, transporting thousands a day to cities all over Western Europe in Paris, Brussels, Lille, Calais, Disneyland Paris, and more.

There are also seasonal routes, including trains to the south of France during the lovely summer months and the Swiss Alps for the best skiing around during the winter.

Soon after the launch, Eurostar began services from another station, Ebbsfleet International in Kent.  Travelers can also board the high-speed bullets via their other station in Kent, Ashford International.

Since their conception in 1994, Eurostar has continued to provide service between the United Kingdom and both the cities of Paris and Brussels. What has changed, however, is the number of destinations Eurostar is now providing for its passengers.

Today, Eurostar is connecting over 100 European destinations, stretching far beyond the United Kingdom, France, Belgium, the Netherlands, Switzerland, Germany, plus dozens of more cities throughout the original countries.

Being one of the first train services to adopt the idea of loyalty programs and premium lounge areas for frequent riders, the line is once again taking the lead in new innovations in the industry.

Eurostar has recently enhanced their fleet of trains to be up to par with today’s standards. By utilizing the latest state of the art materials, the trains are now economically and environmentally conscious.

Eurostar’s sparkling new trains will be introduced to service one by one, elongating the longevity and success of the new fleet. Whizzing across Europe with ease, the company is set to roll out even more city to city services as their business grows.

The new Siemens train sets are not just any high-speed bullets.These sleek, futuristic, forms of transportations boast chic interior design with eco-friendly upgrades.It’s a nice change from your typical run-of-the-mill train. Innovated by famous Italian designers at Pininfarina, Eurostar has worked carefully to incorporate customer suggestions and feedback, societal changes in terms of environmental consciousness, and polished design to create this legendary fleet of new trains.

Seventeen of these new Eurostar trains have been meticulously engineered and specially constructed by Siemens. Being compatible with the European network of high-speed trains, the new innovations will not disappoint customers.Travel Gone Green

It’s très simple. Unlike other providers, Eurostar offers seamless city center to city center travel, eliminating major obstacles and inconveniencies in transporting yourself to an out of reach train station.

The high-speed service is turning thousands away from more expensive, less convenient air travel. There’s no difficult transfers out of the city, security lines, or baggage claim here.

Maybe most importantly, choosing to travel by train rather than airplane contributes 80% less carbon dioxide emissions. Having the option to eco-friendly travel paired with the comfort, space, and short check-in process may just convince new passengers to skip their next flight and opt for Eurostar instead.

Reaching a mind-blowing 300 kilometers per hour, Eurostar’s highspeed fleet can get you from one country to another probably faster than you may be waiting on that security line at the airport.

With new routes being added each month, the train service is constantly creating convenient solutions for businesspeople and travelers around Europe.

If you are traveling with the whole family, fret not. Eurostar’s onboard dining services have added specially curated children’s options, keeping the whole family happy, satisfied, and quiet throughout the entire journey.

Like never before, Eurostar is creating seamless connectivity with London, as well as other cities throughout the United Kingdom, with the rest of continental Europe.

Seize the day and take advantage of this convenience at lower costs, and an immensely lower environmental impact than flying causes. Luxurious, inexpensive, and eco-friendly, Eurostar is the new way to adventure all over Europe.