Hidden Europe: What Eastern Europeans Can Teach Us 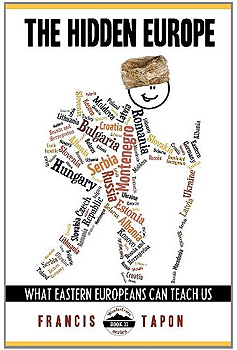 Even though Francis Tapon claims Finland is in Eastern Europe, his book The Hidden Europe: What Eastern Europeans Can Teach Us is still an excellent read.

“Finland is east of Poland (and north of the Baltic), so geographically it certainly is in Eastern Europe,” Tapon writes. As a “quasi-Eastern European country” during the Soviet Era, Finland becomes the author’s stepping stone into the “real” Eastern Europe, and the starting point for his scintillatingly hilarious adventures – so while reading this book, I could almost forgive him for making such an egregious error.

In 2004, after having hiked the Appalachian Trail three years before and visited Prague, Budapest, Russia and Ukraine in the 90’s, Tapon began longing for another adventure. “I wanted the Eastern Europeans to teach me about their cuisine, history, languages, sites, innovations, economy, religion, and drinking habits,” he writes.

Tapon recounts his experiences of each of the 25 countries he visited in this book that is as amusing and entertaining as it is educational. As he takes us along to backpack with Estonians, hitchhike in Albania and anguish about the complex Slovenian grammar, he also gives the rundown of each country’s political, economic and cultural situation.

At the end of each chapter about an Eastern European country, Tapon lists what the country can teach us, whether it’s to be generous at weddings like the Croatians or to have a two-hour coffee with friends like the Serbs. 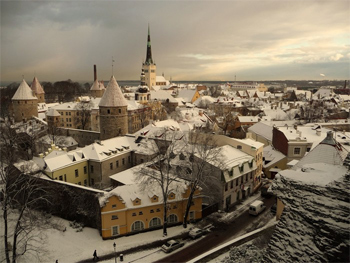 “Tallinn, Estonia, was my home for nearly half a year. The Old Town is straight out of fairy tale.”

The Hidden Europe makes learning about the region fun. Any student of Eastern Europe (or of travel, or life in general) should get their hands on this book when it launches on March 4, 2012, the day of Russia’s Presidential election, with a limited hardcover release on December 12, 2011. Next to going there yourself, this book is the best way to uncover the secrets of the hidden Europe.

Excerpt from the book:Five of the ten things Baltic nations have in common

I spent half a year living in the Baltic in order to understand how Estonia, Latvia, and Lithuania are different. Foreigners view them as one unit—like a Balticstan state. However, Baltic people hate it when foreigners assume they’re all the same. Before we summarize their differences, let’s consider their similarities. As Jared Diamond argues in Guns, Germs, and Steel, much of what shapes a nation is its geography. By that measure, the three Baltic states are quite similar. They all have:

• Flat terrain (the highest Baltic mountain is in Estonia—it’s just 318 meters).
• Access to the Baltic Sea.
• A similar latitude (so they get similar weather).
• Similar crops and cuisine (their geography limits their food choices).
• A border with Russia (which has influenced them throughout the centuries).

One would expect that people who have such similar geography would also share many characteristics. They do. Let’s observe 10 common traits.

As winter approaches, Baltic people become human squirrels. Every autumn, Estonians, Latvians, and Lithuanians instinctively collect glass containers, sanitize them, and spend endless hours cooking fruits and vegetables in large pots. Their kitchens become mini-factories, pumping out dozens of preserves. They repeat this ritual every year for good reason: they wouldn’t be here if they didn’t.

“It’s really not popular to buy jam from the shopping center,” Inga explained. “Lithuanians take the view that homemade food is healthy, so lots of food is made at home. Many Lithuanians (or their relatives) have gardens, and its fruits and vegetables are always preserved for the winter. Every Lithuanian family has its own signature jam, depending on what it has access to. For example, this autumn I made some plum jam,” she said with a smile… The Baltic is well north of any state in America (except Alaska), so their winters are brutal and dark. The only way they could survive the winters was by filling shelves with preserves. Communist stores were poorly stocked, so preserves were a vital nutritional supplement. Although nowadays (thanks to global trade) you can buy mangoes and strawberries during the winter, most Baltic homes are still packed with glass bottles filled with homemade jams, mushrooms, and pickles.

Another great Baltic tradition happens during Christmas. In America, when someone gives you a gift, you take it and say, “Thanks.” That’s not acceptable in the Baltic. When a Lithuanian, for example, offers you a gift, you must recite a poem before receiving it. This rule is particularly true for children. During humbler times, when Lithuanian children weren’t showered with a dozen presents, this tradition encouraged children to cherish each gift.

Imagine if spoiled American children had to recite a poem each time they got a gift. Since poetry is a dying art form, many Americans wouldn’t even know what to say. And if they did, then the unwrapping ceremony would take so long that exasperated parents might, in the future, give fewer gifts. 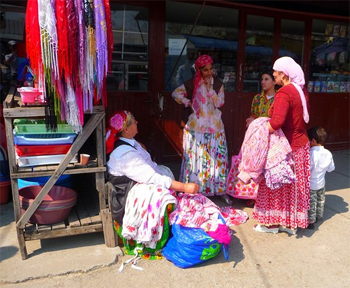 Although abundance is entering into Baltic society, Christmas is still not a holiday where people try to bury their friends and family with gifts. Therefore, you’ll still see children and adults stand up and chant a simple poem in front of a gathering before receiving a gift. This powerful tradition not only keeps poetry alive, but it also shows a deeper gratitude than just saying “thank you very much.”

Baltic people hate being called Eastern European. For example, in an American library I saw a woman who looked Eastern European. I looked at her two blond children at her side and thought she might be Russian. I was curious if I was right and so I said, “Excuse me, are you from Eastern Europe?”
She thought for several seconds and finally said, “No, I’m from Latvia.”

“Cool!” I exclaimed, thankful that I hadn’t told her that I thought she was from Russia. “But isn’t Latvia in Eastern Europe?”

“Oh. So where would you say Latvia is?”

“We’re in Central Europe,” she said with confidence.

“Really? So does that mean that ‘Eastern Europe’ is Russia?”

“OK,” I nodded. “What about Ukraine? Is that in Eastern Europe too? Or is that Central Europe?”She struggled with that question, realizing that the only thing east of Latvia was Russia, and then tentatively said, “I suppose. I’m not sure.”

Overwhelmed with these deep philosophical questions, she was flustered and said, “I’m not sure. I don’t know.”

I told her that I had visited Latvia and so she quickly felt comfortable enough to confess that she didn’t like Russians. She struggled with how to classify Ukraine. On the one hand, Ukraine was like Latvia—just another Soviet satellite state dominated by Russia. On the other hand, Ukrainians look, talk, and smell more or less like Russians. Just don’t tell that to the Ukrainians, especially western Ukrainians, as we’ll learn later.

Baltic people are socially retarded. Yes, it’s an outrageous statement, but nowhere do I find it harder to socialize than in the Baltic. To sum up social interactions in one word it would be: awkward. At first, I thought it was me. I realize I must smell bad, look funny, and say stupid things. However, I found other people who were the opposite ofme struggled too. Kike Garcia, a Spaniard traveling through the Baltic with his buddy, told me, “We just couldn’t connect with those people. They’re so cold and distant.”

Locals admit that they’re socially awkward. Kati Loite, an Estonian studying in Virginia, admitted, “Estonians talk a lot less than Americans. An average Estonian is a cold person, who needs time to warm up.”

I invited an Australian guy to join Maiu and two other Estonian women for drinks at a bar in Tallinn. Later Maiu and her friend Liis agreed, “We had much more fun with that Australian than if we were just with Estonians. Estonians just don’t know how to have a good conversation. They just sit there and don’t say anything.” When I was living in Estonia, I always felt the pressure to initiate a discussion; otherwise, the conversation would be flat, dull, or nonexistent.

Whenever I asked Baltic people to describe themselves, they often said, “We’re an envious people.” This trait became obvious in Estonia when I read a government booklet written by Estonians describing Estonians. The book covered many issues, including how Estonians are full of envy. When I asked Maiu’s mother to describe a typical Estonian trait, she said, “Envy.” 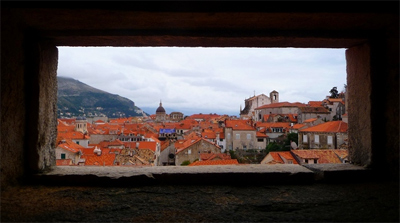 Dubrovnik is like a Venice without the canals and the romantic twists and turns.

What’s curious is that when I asked Latvians to explain how they’re different than Estonians, some Latvians said, “We’re envious people.” I struggled to keep a straight face, knowing that Estonians had just said the same thing when describing themselves.

I figured Lithuania would be different, but then Andrius Geguzinskas told me this popular Lithuanian joke: In Hell, the Devil shows his minions a pot full of Russians. He says, “Don’t worry about them, because if they escape from the pot, they’ll just buy some vodka and then jump back in the pot.”

Dalia alluded to this joke when she told me, “Lithuanians are jealous. With Jewish people, if you’re doing well, they say ‘I’m happy for you, and I will help you.’ They have a community and they help each other.

Buy this book on Amazon The Hidden Europe: What Eastern Europeans Can Teach Us (Wanderlearn Series)