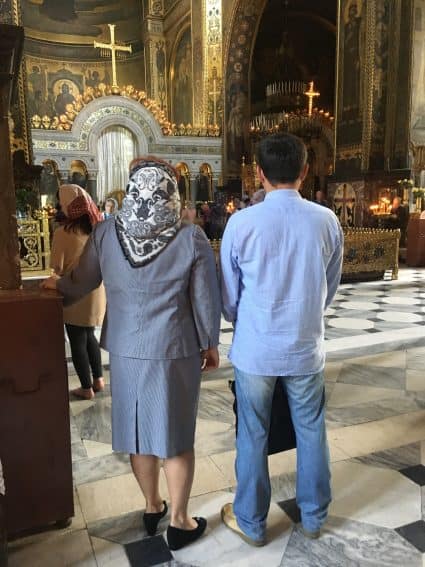 Urban Dictionary defines ‘extra’ this way: “over the top, excessive, dramatic behavior, doing the absolute most.”

Extra. The word rattled around my brain throughout my time in Kiev.

With such a rich, fascinating history, this capital city of Ukraine has had hundreds of years to do the absolute most at every turn: their churches are the most ornate, their parks are the most artful, and their fashion is distinct, chic, and affordable.

The streets are filled with these ultra (some might say… “extra”) fashionable people. In short, Kiev is extra AF in the best way.

All of Ukraine is open and eager for tourism now, but Kiev has the biggest airport and, therefore, the largest international presence.

That said, avoid Ukraine Air if possible. If Kiev does the most, this airline truly does the least.

Train travel, on the other hand, is slower but also more comfortable, fun, and readily available all throughout Ukraine, so an overnight train to or from Kiev is a great way to get off the beaten path into some of Ukraine’s lesser-explored cities and towns.

When our intrepid group of travelers arrived in Kiev, we’d been off that beaten path for so long that the capital city’s shiny, commercial skyline was a bit of a shock.

For the first time in weeks, I saw brands I recognized. I can even read a little bit of Ukrainian, so I stared intently at a KFC ad and tentatively asked, “what is a fem milly boo ket?”

Our guide stared back at me. “Family bucket, Sarah.” Ah. Welcome back to the real world, indeed. And, by the way, it’s just Ukraine, not “the Ukraine”.

They have a thing about that. Other than that, though, we found Kiev’s citizens to be welcoming and helpful whenever possible, which is important, given that the Cyrillic alphabet makes reading street signs difficult, and not everyone speaks English.

This city has been through a lot in its storied history. The streets are winding, cobblestoned and flanked by beautiful, historic buildings.

It’s known as the city of Golden Domes, which is the most extra sentence I’ve ever typed. In addition to their golden domes, Kiev has the Golden Gates, because, of course, they do. What else would their gates be made of?

The original gate, dating back to the 11th century, was destroyed during one of Kiev’s many invasions and reconstructed in the 1980s. Nearby is the stunning St. Sophia Cathedral, which is even more beautiful inside than out.

St. Sophia is one of the most stunning examples, every detail big and small in the church is ornate and beautiful.

St. Volodymyr’s Cathedral is also worth a visit, and, like St. Sophia, his interior pales in comparison to the almost overwhelmingly beautiful interior. 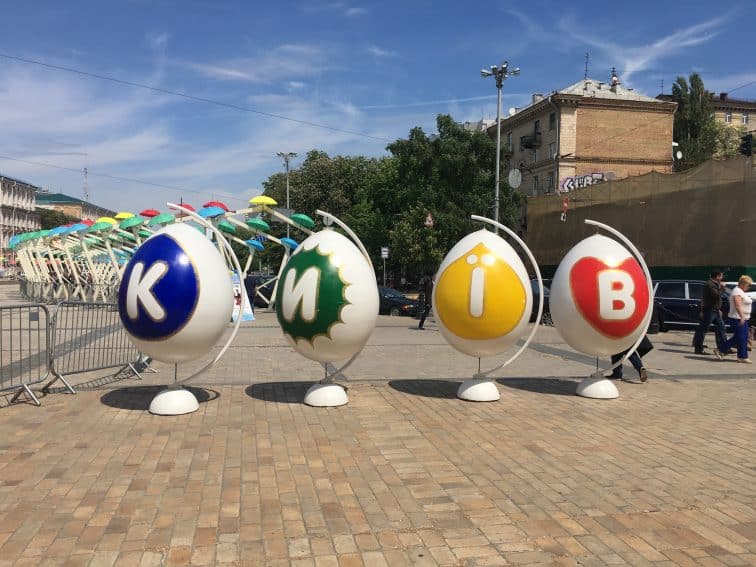 Stepping inside these cathedrals feels like being transported to another world- an arched doorway transforming the very air around you, the incense immediately reaching your nose as your eyes adjust to the dim light streaming through stained glass windows.

But Kiev’s most famous religious attraction is quite different; the Lavra Cave Monastery, one of Ukraine’s Seven Wonders, and a UNESCO World Heritage site.

Lavra requires at least half a day to really explore, a full day if you want to visit the surrounding district that bears the same name. It’s a whole complex of buildings, including catacombs containing the mummified bodies of former

Now, because everyone and everything in Kiev is so frickin extra, these weren’t any old monks. They were led by Brother Anthony, who traveled from Greece after being told in a dream to go to Kiev. He arrived in the city around 1051 and, finding the existing monastery far too luxurious, found a nice cave where he could properly monk it up, hermit style. 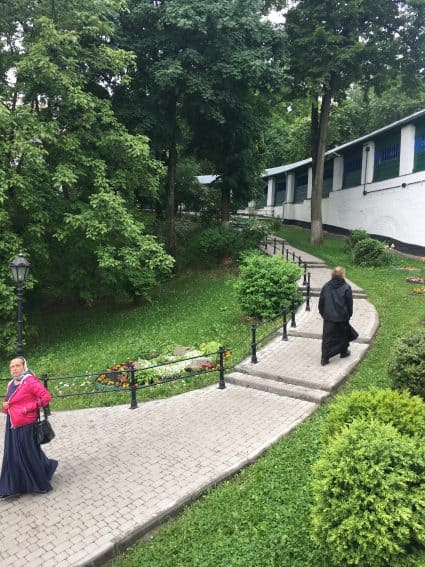 Word spread, so more and more monks from all over joined him in his austere, underground caves, which they expanded and carved out themselves. They lived, slept, and eventually died in those underground caverns, at which point they were preserved within them.

There are still about 100 living monks at the Pecherks Lavra, but they live above ground now. Millennials, am I right? According to these modern-day residents, science has failed to explain why the atmosphere within the caves preserves the ancient bodies the way it has for the past thousand years.

And I must admit that none of the monks look a day over 500. All of this to say, when it comes to monasteries, Kiev’s monks do not mess around.

There are more than enough cathedrals in Kiev to keep you busy, and the last one I’ll recommend is St. Andrew’s. Its interior is not as ornate as the others, but the view from the outside is stunning, Landscape Alley is a five-minute walk away.

Landscape Alley is a great example of the interactive, useful art that’s all around the city.

It’s a beautiful park, a great place to sit and read a book with a cup of local coffee, or to get that perfect, if oh-so extra, Instagram shot. There are also lots of cafes, street vendors, and local shops to peruse in the neighborhood.

Speaking of shopping, I recommend it. In general, but especially in Kiev. Khreshchatyk, the main street, is a good place to start.

It used to be one of the most expensive streets in Europe, and while it still features many high end, international, designers, Kiev’s recent surge in national pride means they also feature lots of amazing, affordable, Ukrainian designers, especially at Tsum, a shopping center with a fun, colorful interior.

If you want something off the beaten path that’s still luxurious and high end, I fell in love with Kachorovska Store & Cafe, a shoe atelier that not only makes custom shoes you can design yourself but also serves delicious coffee and pastries.

There’s a backyard patio where you can sip your coffee and contemplate your purchases. It’s a third generation owned shoe store and, in the spirit of being Kiev-level extra, I bought some orange glittery sandals.

For foodies, there’s also the Besarabsky Market. Known as the “breadbasket of Europe,” it’s a veritable feast for the eyes, nose, and mouth with vendors from all over selling bright, beautiful food. Unfortunately, photographs are not allowed inside, so you’ll just have to take my word for it that it is worth a visit.

It’s a great place to buy unique snacks and spices to remind you of your trip, and there are snack stands and restaurants inside if you just can’t wait.

The food in Kiev is truly something special. Because it’s historically been heavily influenced by so many invading cultures, the seasonings are diverse and pack a punch of flavor.

I used to think pierogis had to be a bland until I ate at Katiusha, a pierogi restaurant where we all walked in as humans and left as overstuffed pierogis waddling to our next destination.

In addition to their many takes on the classic Ukrainian dumpling, Katiusha is decorated like the apartment of the Ukrainian grandmother you never knew you had.

Opana’s, Panska Heralna, and Shynok are some other great places to get exemplary and delicious local cuisine.

My favorite dish of the whole trip was banosh, a corn pudding with crispy pork bits and fresh cheese. It’s over the top delicious.

On the one hand, it sometimes felt odd doing lighthearted things like shopping and restaurant hopping, given the recent tragedies in Kiev. For many, that tragedy is ongoing, as Ukraine remains in a war with Russia. In February of 2014, over 100 demonstrators were killed by snipers in Maidan Nezalezhnosti, Kiev’s central square and most recognizable area.

Ukraine’s former President, Viktor Yanukovych fled the country immediately after. His trial is taking place in his absentia as the nation tries to rebuild with the new slogan, “Freedom is Our Religion,” seen on a huge sign overlooking the square.

There are flowers and memorials to both the protestors as well as the soldiers lost in the ensuing war.

On the other hand, so much of life in Kiev has returned to normal, and the city is safe for travelers. Declaring their independence has renewed Ukrainians’ national pride, so it felt especially poignant to visit the dramatic Motherland Monument, a tall, striking, statue with her arms held high.

The monument overlooks a park and the WWII museum and also has an elevator inside of it. Even on a cold, rainy day, it was well worth the trip up to see the panoramic views of the city’s skyline, filled with its signature golden domes.

In addition to the WWII museum, there’s also the Babi Yar monument that commemorates the massacre of Kiev’s Jewish population in 1941, followed by a concentration camp where a further 100,000 people perished.

It’s a grim story, but worth remembering, especially as the city determinedly embarks on a new, more hopeful future, all while holding on to what makes them unique and extra.

Ever since she was a kid, Sarah Hartshorne has dreamt of traveling and making people laugh. Best known as the plus-size contestant on Cycle 9 of America’s Next Top Model, modeling provided her with a chance to travel the world for clients, like Glamour, Vogue L’Uomo, Palmers, Sketchers, and more. Since “retiring” from modeling she’s focused on comedy, production, and writing in NYC and continues to travel whenever she gets the chance. She’s performed in clubs all over NYC, as well as Edinburgh Fringe Festival as well as producing and writing content for Lady Parts Justice, Project UROK, and more.