The Bus: Why Americans Still Board the Greyhounds

Greyhound Travel: While Cheap Flights Siphon Away Many Travelers, Some Still Stick with the Bus

Other than a fear of flying, why do people still ride the bus when airlines offer a cheaper, more efficient alternative? After all, buses are notorious for being foul-smelling, cramped, and slow.

Why, in the middle of the aviation age, does bus transportation still operate with an average of 18 million passengers annually? The trips last dozens of hours. Often they are overcrowded and delayed.

Yet still, Americans still choose to ride Greyhound buses. Why? The largest factor isn’t’ fear of flying as I assumed. It’s poor planning or last-minute bookings that drive the bus industry.

Days before departure, airline tickets are now well beyond the reach of middle and lower-income customers so the cheapest alternative is riding the bus.

If fate didn’t throw us last-minute curveballs, Greyhound would be obsolete. As long as human emergencies occur, and life changes without warning, buses will continue to serve the urgent needs, and sometimes desperate needs, of millions more middle and lower-class Americans to come.

Albuquerque to Chicago by Greyhound

I’m traveling from Albuquerque, New Mexico to Chicago, Illinois. Flight tickets cost between $80 and $250 for a four-hour flight. The thirty-one-hour bus ride doesn’t differ that much in price.

Tickets range from $110 to $140. Each year Greyhound carries over 18 million passengers across the United States,  as opposed to the 630 million that airlines transport, according to the Bureau of Transportation Statistics.

I arrive at the bus station 40 minutes early with a small crowd of other groggy passengers. The scene isn’t much different than what you might find at a domestic airport in the wee hours of the morning.

We begin to check in our belongings and are informed that the bus is five hours behind schedule. We’re already off to a great start.

It’s nearly six hours later before the Ticketmaster’s voice calls our rag-tag group to board. Like a storm cell disgruntlement forms and several passengers raise their voice in contempt at the delay. 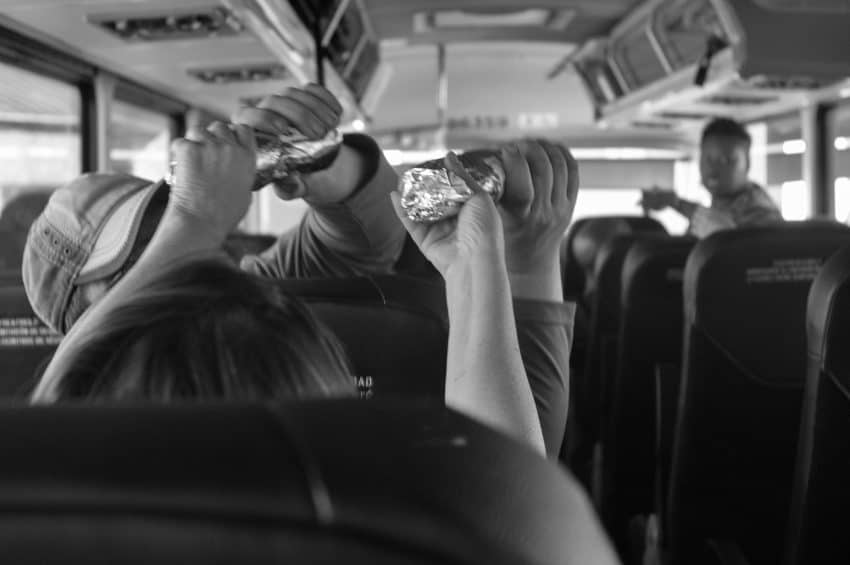 One woman yells at the office, “We’ve waited here for hours and we’re hungry. Where are those food vouchers?”

The driver attempts to soothe the mood by passing out mushy green chili burritos and lukewarm Gatorade, and the efforts only postpone our sullen mood for a brief moment.

I fall behind and let my new-found friends board and claim the best and second-best seats. I squash into an aisle seat. My bus compatriots’ overall socio-economic status is middle to lower class.

Knock off Wal-Mart Converse, tobacco smells, and rapid aging due to poor medical treatment all run rampant inside the bus. White cowboys pull their hat brims over their eyes.

African-American mothers nurse their crying infants and lone Native American zones out into his music. Everybody is moody and exhausted.

We departed Albuquerque three hours ago and since then, in between catnaps, everyone had become more talkative and amicable.

It somehow feels homelier or at least friendlier than what I’ve seen and experienced on airplanes.

Through some discrete eavesdropping, I noticed that conversations evolved from the standard “who, what, when, where?” to more in-depth topics ranging from personal to social and political issues.

Matthew, an Absentee Shawnee and Mississippi Band Choctaw Native American, discusses how the elders are aging on the Reservation in Oklahoma and there are few people care for them.

The little two-year-old girl to my right is speaking gibberish but I suppose that’s normal.

It’s a unique situation being contained in such a small compartment with so many other people for so long. That might be the reason that so many of us have opened up so much. Either way, the mood now is different.

Since departing we all agreed that we probably won’t take Greyhound again. James from Brooklyn has been set back 13 hours. Everyone’s average delay time is 6 hours.

Energy visibly drains from James’ face as the sunset. It’s 8 pm and we’re slowly approaching Oklahoma City. Some, like Talisa from Long Beach, have family emergencies and some like Misty from San Diego simply didn’t plan.

Most said they probably won’t take Greyhound again. Now, this doesn’t speak for all passengers. A few have had positive experiences with no delays and seamless bus transitions.

Jerry, a private security guard from San Francisco, started his ride yesterday at noon from Los Angeles. “There were only six people on the last bus and we didn’t have any delays”, he said. He travels by bus because he prefers the ground.

The trains would have extended his trip an extra two days and the bus was $200 less. He purchased his ticket a few days ago. Nobody left it up to the imagination why they ended up taking the bus as opposed to the train or plane. Last-minute plane tickets are notoriously pricier.

Night fell and everyone assumed the most comfortable of the uncomfortable sleep positions. The sounds of the bus engine purring sang everybody to sleep. Occasionally the bus stopped, lights came on, some boarded and disembarked.

Nobody understood the meaning of comfort any more. The morning rays finally made their way over Missouri’s horizon and St. Louis’ Arch rose from the mists. The line ended here and we all had to transfer buses.

Nobody could give us good news at the station. Our bus, which ran five hours behind, had caused all of us to miss connections. The next buses at 2 p.m. were full and the following buses didn’t arrive until 7 p.m. that evening, 10 hours later.

At thirty-nine hours traveling and the destination six hours away, I gave up, rented a car and took four other passengers with me to Chicago. Greyhound failed us.

For those passengers less fortunate to afford the luxury of a rental car, misery set upon them.

The young Hispanic mother with the 3-month-old infant deliriously sat on the black plastic bus bench.

Others called friends and family informing them of the delay. “I’m supposed to catch two more buses after this! What am I going to do now?” a frazzled lady yelled.

“We should get more food vouchers!” another added.

Bored ticket agents all-too-familiar with delayed buses and angry passengers tried their “best” to console the aggravated mass and unsurprisingly to no avail. 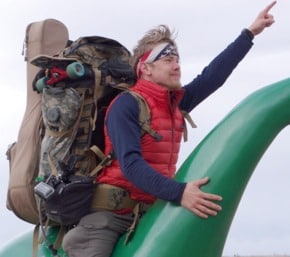 With the turn of the Jeep rental steering wheel, the five of us drove away from the Greyhound bus station named “Despair”. 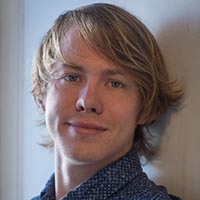 Alexander Volberding is a freelance photojournalist circumnavigating the globe pursuing his passion for storytelling. A close friend to adventure, you’ll find him trapped in Nebraskan blizzards, crammed into speeding Chinese passenger trains, or attempting to crew tall ships. See more of his work here: his Instagram account