Southeast Asia may be the up and coming place to party, work or ‘find yourself,” but these luxuries and drunken-fueled epiphanies are often surrounded by Good Morning Vietnam-esque scenes of poverty and corruption.

Currently based in one of the most advanced SEA cities — Singapore, I decided to travel to Cambodia; a third world country without trains, and a disturbing memory of the Khmer Rouge regime.

I purchased a ‘Gold Class’ night bus to take me from Sihanoukville to Bangkok – a journey that both the night-bus operator and Google maps assured me would take around 14 hours.

The year before I had taken a ‘Standard Class’ night bus from Bangkok to Phuket which had actually been largely enjoyable. So purchasing a ‘Gold Class’ ticket for Cambodia placed images in my head of a leisurely sleep to the setting sun over Cambodian farmland, and being awoken at dawn by a continental breakfast served by a beautiful in-bus waitress called Lunita.

This, of course, did not happen. Instead, an optimistic 14-hour trip turned into a 26-hour hell-hole, traveling on roads more complicated than Tom & Jerry’s relationship status.

Bus Travel: You’ll venture onto roads that should never be driven on

Dusty, narrow and about as smooth as one of those off-road tracks they test Land Rover suspensions on.

If you’re expecting to simply nod off like an under-dressed Sleeping Beauty, think again, it won’t be all Disney romance either – as you’ll be violently jolted from one side to the other, all in the name of travel.

Don’t expect to be awoken in the middle of the night by a Prince Charming with dreadlocks, on my trip I was prodded awake by our driver and told to shift over in my bunk bed to allow a frail old woman and her two grandchildren to cozy up and share my space.

In the end, I gave up my bed and decided to try and sleep in the aisle. Be warned, bus tour operators do sometimes overbook the bus just to make up for any last-minute cancellations!

It won’t be just one bus

At around four in the morning, the bus came to a halt and we were thrown off (the grandmother carefully passed down like a fragile Leek at a grocery store) and ushered into a tiny mini-bus with little air conditioning.

The journey had been well over 10 hours and we were now informed that this mini-bus would be a pleasant three-hour journey – it was to be six hours, before we were transferred into another bus and promised, once again, for a short ride.

The driver will wait until everyone is asleep before taking the bus off the main road and into a village to pick up his friend.

Yes… this actually happens. Despite traveling on a stretch of road which is about as smooth as a pineapple, the driver waited until the dead of night to turn off and head into a distant village on an even worse road surface.

It turns out our driver was picking up a lady-friend, who proceeded to sit on his lap whilst he tried to navigate the bus back to the stretch of road that leads to the Thai-Cambodian border.

We were traveling pretty smoothly until the bus came to a halt, and his lady-friend got off. Wandered out to the middle of a rice paddy. Pulled down her trousers and squatted to take a s**t (probably on someone’s soon-to-be lunch) whilst the beautiful Cambodian morning sun rose in the backdrop.

It was like a scene painted by Monet. After she was done, she returned to the driver and remained perched on his knee for the rest of the trip like a self-satisfied lap-dog.

Unfortunately, many bus companies have deals with road-side cafes to bring as much trade as possible. One guy on our bus got badly ill from something he had eaten on the roadside, the rest of us were lucky. It’s a shame that these cafés are not always the top-notch in cleanliness, nor for quality of food. So be careful.

If you are visiting Cambodia, then their transport simply acts as a mild deterrent. The country is incredibly stunning, and a favorite for many nomads – and for any prospective train-line developers, or roadside strawberry sellers looking for a new money-making ground. 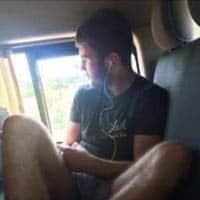 Oliver Jarvis is the in-house writer and editorial assistant for Asian Geographic Magazines ltd. He currently resides in Singapore, Out of the office, Oliver enjoys traveling Asia; writing, photographing and, after both producing and directing his own documentary.