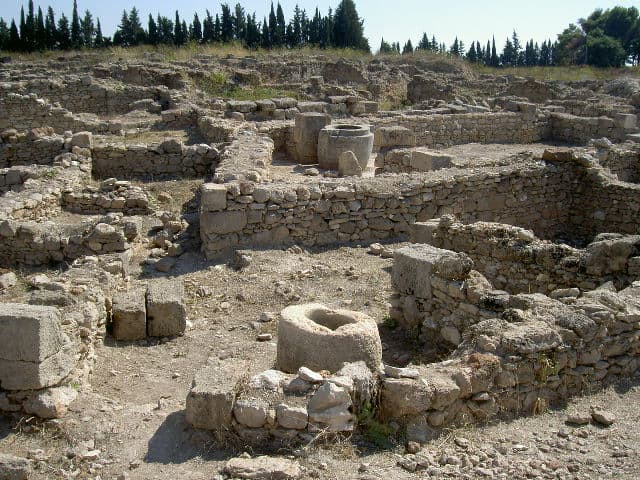 Ugarit, Syria: the Birthplace of the Western Alphabet

The first time that I visited the ruins of Ugarit, today is known as Ras Shamra, in the early 1970s, it was with a friend, who was at that time a professor of languages in one of the universities of Toronto.

I have never forgotten the excitement he felt when he bought a replica of the first alphabet in the world engraved on a finger-size tablet.

Since that time, I have visited these ruins, 16 km (10 mi) north of Latakia, Syria‘s major port, a half dozen times. Yet, for me, its magic is still there.

The alphabet that this ancient city gave the western world is, perhaps, the greatest contribution to the evolvement of humankind. For me, it is a spot surrounded by an aura of unbelievable mystery and romance.

For centuries, Ugarit, the capital of a Syro-Canaanite/Phoenician kingdom, was lost in history until in 1928 a local farmer’s plow hit a large piece of masonry buried in the soil.

The excavations that followed established that the farmer had come upon the remains of one of the most affluent and powerful cities in the ancient Middle East.

It had lain abandoned and uninhabited since, 1180 B.C. when it was destroyed by a fire set by the raiding Philistines, or as they were more commonly known, Sea People. Over the centuries, the site was gradually covered with soil until all traces of the city disappeared and its origin was lost in the mists of prehistory.

Ugarit rose to prominence as very prosperous agriculture and trading center at around 3,000 B.C. However, it only became important as an independent kingdom from about 1,800 B.C. when numerous commercial activities, especially in the field of sea-trade flourished.

The building of various types of ships and boats and other industrial activities made Ugarit a well-known marketplace of the ancient world. Life during this era and the subsequent years, and the city’s wealth and influence in the Eastern Mediterranean, are recorded on the thousands of tablets unearthed in the Royal Palace’s library discovered in 1948.

Since that time more of these records on clay are continually being discovered in the ruins. In 1999, 400 new tablets were unearthed, throwing light on the economic relations between the Ugarit Kingdom and the other nations of the eastern Mediterranean, especially Egypt, Crete, Cyprus and the Anatolian kingdoms.

Also, from these tablets, it was established that in the 15th century B.C. the first alphabet, which was the forerunner of all the western alphabets, was created. Engraved on a clay tablet the size of a man’s finger, which is preserved at the National Museum in Damascus, it is one of the most important/miraculous innovations of humankind – a turning point in human history.

The Ugariti alphabet, which has many similarities with modern Arabic, came into common use between the 16th and 13th centuries B.C. and, among others, is the mother of all European alphabets.

Consisting of thirty cuneiform letters based on the Egyptian hieroglyph, it was adopted by the Greeks, Etruscans, and Romans. The invention of this alphabet, whose sequence and pronunciation is similar to modern Arabic, was so important to mankind that it cannot be compared to any other event in human history – more important than the invention of printing was to be some 3,000 years later.

From the records on the tablets going back to the mist of time, we learn that the affluent in Ugarit lived well. The homes of its wealthy merchants and influential public figures each had its own bath, courtyard, well and burial chamber. This was at a time when in Europe, people were still living on the edge of the Stone Age.

These tablets indicate that women played an important role in Ugarit society. In admiration and appreciation of women, there was found written: “You are the treasures of the horizon, the deer of the mountain, the shining morning star, the blue nature of marble, the rain in good times, the water of cornfields and the plentiful harvests.”

The tablets go on to state that women possessed wisdom, and their wise expressions led to prosperity and gave birth to hope.

Giving, even more, stature to women, they considered the birth of a child a happy occasion that might put an end to curses of gods.

From the texts, it was brought to light the philosophical viewpoint of the Ugarit people who believed that immortality was the essential quality of the gods while death is the destiny of all mortals.

Find a well-preserved tablet at the National Museum of Damascus, Syria

Some of the mythological poetry found, much older than the Iliad and Odyssey, are enchanting in their beauty. In the field of music, the tablets revealed that hundreds of years before Euripides and Pythagoras, the musical note was written in Ugarit.

A musician today can play this oldest written musical piece – four lines of words and the musical notations – called the ‘Ugarit Song’ which consists of five modes – the same modes wrongly believed to be Pythagoras’ modes.

Another important find was the library of the diplomat named Rapanou. When I first saw in the ruins the sign indicating his home, my breath stopped for a moment.

I had read about the discoveries made in the home of this Ugariti noble, and it was déjà vu now seeing his name.

Apart from his official correspondence, there were found in his home, dictionaries listing animals, deities, weights, and measures used at the time, and the first recorded eclipse of the sun in March 1223 B.C.

A tablet in the library gave an account of how to treat sick horses and, very precious to philologists, was a lexicon on the clay of Sumerian, Hurrian, Babylonian and Ugaritic words.

By far, the most important building unearthed on the site is Ugarit’s Royal Palace, described by some archaeologists and historians as the most beautiful palace in the ancient world. It consists of over 90 rambling rooms and six courtyards with small gardens of fruit trees, a decorated swimming pool built from attractive stones and a furnace for baking documents written on clay tablets.

The palace also included a number of decorated halls and rooms for keeping the archives and the treasury, as well as bedrooms and workshops for skilled artisans.

The palace reflects the opulence of Ugarit in its days of glory. Its fountains and sophisticated water and sewerage systems must have been the talk of the ancient world.

Today, as one surveys this palace from atop the massive ruins, its confusing layout is somewhat difficult to make out.

Like all other buildings on the site, only waist-high piles of stone outline its rooms, the narrow edging streets and buildings.

On the highest point on the site, which appears to be only a heap of stones, one can still see the foundations of a temple dedicated to Bâal, the supreme god of the Canaanites and Arameans whose father was El — the father of gods and men. Poems found in Ugarit tell the story of how Bâal with the help of his sister, Anat, won kingship of the gods.

A second temple, dedicated to Dagôn, the god of the underworld, fertility, and wheat, is not too far away. Dagôn was highly honored by the Amorites, a nomadic people inhabiting Upper Syria, whose most famous king was Hamurabi of Babylon fame.

Besides its palace and temples, there has also been excavated, a well-preserved grave with clay and bronze instruments used in funerary rites, stone bases of a great number of structures, wells and watercourses, and numerous streets.

Through the last half a century, these excavations, besides Ugarit’s renowned tablets, have yielded a lot of artifacts like statues of animals,

gods, and goddesses – today on display in museums spanning continents. From the museum in nearby Latakia and Tartous to those in Aleppo, Damascus, Paris, and New York, Ugarit offers its treasures to the world.

The city continues to be a rich source of historic information for archaeologists. On a continuing basis, every year, excavation teams working in the ruins unearth new finds. Recent archaeological artifacts, discovered by these excavation teams verify that Ugarit was the source of creative architecture and it was a kingdom where cultivation of the land flourished.

The unearthed findings, dating back to the first half of the second millennium B.C., indicate that the agricultural sector was of prime importance and that the nearby al-Kabir River contributed a great deal to the development of agriculture, especially the cultivation of grain, olives, and vines, as well as raising cattle and pet animals.

From the findings, it was determined that building activities flourished in the Kingdom and Ugarit developed a unique architecture.

In many houses, there were courtyards, which included family cemeteries and wells – covered with decorated stones.

In addition, it has been recently substantiated that the Ugaritic developed handcrafted products made from gold, silver, bronze, and copper, as well as different types of decorated clothes. Unique and ornamented utensils, made of bone, stone, pottery, and clay were also discovered during the excavations.

One of the richest archaeological sites in the world, the ruins of Ugarit are continuing to give archaeologists an insight into the immense contribution made by this ancient city to the later civilizations. The excitement my professor friend felt when pressing that tiny replica of a clay tablet in his hand I, myself, still feel today.

Its engraved letters are what has given us our modern technological world.