The Beauty that Was Syria Before the Terrible Civil War

[Editor’s Note: This story was published 10 years before the current civil war in Syria, that has reduced once-beautiful Aleppo to ruins.]

A walk through the souqs (bazaars) in Aleppo will make you feel as if you have stepped back in time. Aleppo is Syria’s second biggest city, after the capital, Damascus.

Damascus and Aleppo vie for the title of the oldest continuously inhabited city in the world and after thousands of years on the trade route, Aleppo is still very much a traditional Arab city.

The covered souqs, with old awnings, stretch for miles and offer many goods, including cotton, jewellery and silk. The lanes are narrow and my friends and I have to jump to the side every time a donkey trots by, over-laden with various goods.

The markets are swarming with people and the shopkeepers all try to catch our attention as we wander by. They are friendly and helpful and we don’t get any of the hassle that you experience in the great bazaars of Istanbul and Cairo.

Although we have respectfully covered ourselves from head to toe we still stand out as Westerners. A lot of the local women are wearing the burka and some even have a black veil covering their eyes.

It seems strange that a few of the stores sell high-fashion Western clothes and I wonder where they are worn until I take a trip to the toilet.

I discover that some of the women are wearing short, denim shorts and singlet tops under their burkas and their faces are heavily made up. In the West we might say these women are oppressed but to us they smile, laugh and are courteous and happy.

After Aleppo we visit Palmyra, which is right in the heart of the desert. The ruins are huge and impressive – and with no other tourists about we have them all to ourselves. Our guide explains that from the 2nd century BC Palmyra prospered as it was on the silk trade route. Palmyra was the capital of Syria at the time of Christ.

Queen Zenobia was the most famous ruler of Palmyra. She was half Greek and half Arab and defeated the Romans before Palmyra eventually fell to them in 272 AD. After this time her city fell prey to looting and destruction but there are still many remains of what the great ruler built there.

The huge pillars, arches, temples, cemeteries, colonnaded streets and amphitheatre are fascinating and well preserved. Our guide tells us that his grandparents, along with many other locals, lived in one of the temples until 1929 when they were forcibly evicted. How accurate his story is, we don’t know, but it makes for an entertaining and dramatic tour.

Flamboyant guides in Syria seem the norm. Our guide at Crac Des Chevaliers Castle tells us that his parents actually occupied one of the towers of the castle until 1930. Again we aren’t sure whether he is joking.

Crac des Chevaliers castle is located west of the city of Homs and it is absolutely spectacular. Lawrence of Arabia described it as ‘the finest castle in the world’. The crusader castle sits high on a hill with an extraordinary view of the Syrian countryside. [editor’s note: Read Habeeb Salloum’s story about the Crac des Chevaliers.]

Our guide explains that the original fortress was built in 1031, with the crusader knights rebuilding and expanding it in the 12th century. It is one of the world’s largest crusader fortresses with a 98-foot (30m) thick outer wall and seven guard towers which are about 30 feet (8-10m) thick.

The castle is still very much intact and we spend hours exploring, looking for secret passageways in the dark with our torches, visiting the ballroom, kitchen and storerooms where the old oil containers are still kept. As well as for cooking the oil was used to pour on invaders from great heights. 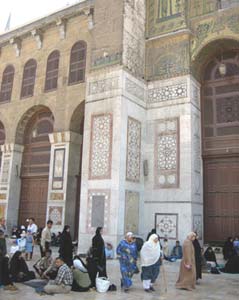 Our guide takes us into the prayer room where he faces an alcove and sings. The curved walls of the room and its ceilings trap the sound beautifully and make for outstanding acoustics.

The singing and flamboyance of the day are a great appetite builder, and our tour is completed with a delicious lunch of mezze and bread. We dine in the princess tower, which, back in the day, was used for visiting ladies of noble heritage.

Every morning in Syria we are awakened by the call to prayer from the various mosques around the country. On the bus from Aleppo to Damascus, a fascinating, atmospheric city with plenty of attractions of its own, we watch a Western movie, Equilibrium, dubbed in Arabic. It is an extremely violent movie and small children watch but when two characters kiss, censors freeze the film.

It is this blending of East and West, of old and new traditions, which make Syria such an interesting and exciting place to visit. With so much to offer I think it is a shame that more people don’t visit here but at the same time it is also the lack of tourists which makes Syria so special.

After completing a journalism degree, Annika Dash left Australia to see the world. Since then she has worked in London, studied in Barcelona, travelled extensively throughout Europe and the Middle East and combined her two loves – writing and travelling.

Habeeb Salloum was a travel and food writer and an expert on Middle Eastern foods. He also authored more than a dozen books. He lived in Toronto Canada. He was GoNOMAD’s oldest contributor at age 96. Click his name above to see his books on Amazon. Habeeb passed away in 2019.