Crete: A Food Journey Across the Island

A Culinary Odyssey in a top foodie Destination: Crete

If you are what you eat, then a country’s food is the medium through which a place and its people can be understood. One non-foodie traveler discovers an island where the food is (nearly) always unpretentious, hearty, and absolutely delicious.

I spent ten days in Crete last August. We traveled from Heraklion to Chania, stopping in Kritsa, Zaros, and Plakias and visiting several other places along the way.

We hiked through gorges, lazed on beaches, visited 4000-year-old ruins, and wandered through many a charming old town, but mostly, we ate. We ate really well.

Food does not normally form such a central part of my trips. Of course, when I travel I try to stick to the dishes typical of the place and I generally steer clear of international restaurant chains unless I’m desperate.

However, I’ve never devoted significant amounts of time and money to dining at a destination’s best restaurants. This approach has resulted in a generally unremarkable food experience, with some standout exceptions at both ends of the spectrum.

Not so in Crete. We had just come off two days of Greek salad and souvlaki in Athens when we caught the overnight boat to the country’s largest island. As we looked around for our first lunch spot in Heraklion, we were dreading more of the same.

Cooking with Love on Crete

That’s when we came across Cooking with Love, a tiny room of a restaurant run by two women who were busy preparing the day’s dishes. As soon as we walked in we were warmly welcomed and immediately invited to view the day’s offerings, which were in the process of being transferred from cooking pots into trays arranged on a small display counter.

We picked the lahanodolmades, a delicacy which, the owner told us, we would not find anywhere else in Heraklion. When we asked, she described the laborious process through which these tasty bite-sized rolls are produced.

Boiled cabbage leaves are stuffed with rice, herbs, and pumpkin; they are cooked in a mix of oil and water which is then used to prepare the lemon sauce with which they are served.

This was the first time that we’d hear a Cretan restaurateur speak about their dishes with such pride, but it would certainly not be the last.

At the end of the meal we experienced our first taste of the famed Greek philoxenia, a tradition of hospitality which came in the form of a complimentary dessert of Greek yogurt drizzled with honey.

All our many other meals would follow the same trend, with our host appearing at our table bearing gifts that ranged from a plate of fresh fruit to little bowls of homemade candied peel or squares of cake drenched in syrup.

More often than not, we were also presented with a small bottle of raki and two shot glasses, the better to digest our food.

As we drove around, we soon realized that the land is as generous as its people are resourceful. Crete is surrounded by sea, but thanks to the mountain ranges running through the spine of the country, there’s also a great abundance of freshwater.

This meant that while we enjoyed platefuls of fried sardines by the sea, we also feasted on farmed freshwater trout a few hours inland.

In Zaros, a small town at the foot of Mount Psiloritis, freshwater is channeled into large tanks where trout and salmon are reared and then caught, cooked, and served at the restaurant on the same premises, the shortest possible distance from farm to fork.

Outside of the cities, the island is relatively sparsely populated, but every uninhabited inch of land seems to be covered in trees, particularly olive trees, which are the source of Cretan cuisine’s unbeatable, not-so-secret ingredient, olive oil.

Another delicacy produced by the island’s mountainsides is horta, a term used to describe all manner of edible wild greens, such as spinach and fennel, that grow unattended and are then picked by the locals. They are lauded for their health benefits and are eaten raw, steamed or stuffed into savory pies known as kalitsounia.

So Many Pies in Crete

Pies are big in Crete, especially at breakfast time. In Chania, my breakfast consisted of mountain tea and marathopita, a flat, round pie filled with fennel and other greens.

In Rethymnon, we came across a wonderful little bakery that made all sorts of pies, with fillings ranging from the traditionally Cretan to more mainstream combinations such a chicken and bacon.

Everywhere else, greens pies and cheese pies were regular fixtures on the menu, but the trophy for most intense pie experience goes to Keramos studios, the family-run hotel we stayed at in Zaros.

Each morning, the breakfast room was filled with amusement and a touch of incredulity as Giorgios bustled around distributing plates upon plates of homemade pies to each table.

Such was the number of pies served that we were not even really expected to eat them all, and take away bags were handed out.

Each pie was a delicious little discovery, with fresh, still warm pastry wrapped around chocolate, lemon curd, raisins or cheese, or tomatoes and peppers from the family’s farm.

It sounds like I spent a fortune on food during my time in Crete. It also sounds like I gained the equivalent of the money spent in body weight.

Happily, neither is the case. The Cretan food equation is all about adding passion and dedication to the freshest local ingredients, thus keeping prices reasonable and plates simple, healthy, and delicious.

During one of our many instances of postprandial bliss, we complimented the restaurateur, repeatedly telling him how good our meal had been.

He went about collecting our plates and clearing our table until, totally unruffled, he paused, turned towards us and simply told us “Well, that’s the point.”

And that’s when I realized how lucky I was to have finally understood.

Dolma – vegetables stuffed with rice and herbs and served with a dollop of thick yogurt. These include tomatoes and peppers as well as vine leaves (and the cabbage leaves described above).

Fava – a dip made out of yellow split peas, topped with finely chopped onions.

Raki/Tsikoudia – Brandy distilled from grape pomace (the remains that result after grapes are pressed during the winemaking process). 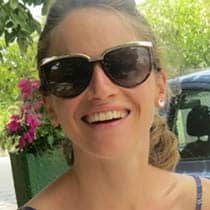 Anne Marie Dimech is a pharmacist who has discovered that her wanderlust is incurable, so she alleviates the symptoms by traveling as often as possible. She lives in Malta.