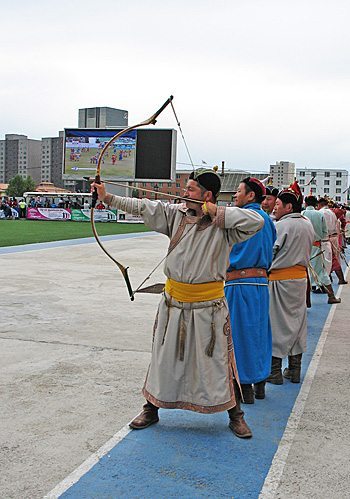 We all looked to the left from the grandstand, shading our eyes as we swept the Mongolia horizon watching for the first sign of the competitors.

Suddenly a swirl of dust appeared, faint in the distance but growing larger as it came closer.

Soon we could hear the far off thrum of hoofbeats from the front runners – a sound that turned to thunder as the riders and their mounts rumbled into view and the crowd cheered their favorites.

The horse race was heading toward the finish line at the annual Naadam Festival in Ulaanbataar, Mongolia.

No effete sprint contest this: horse races during Naadam are between 15 and 30 kilometers long, the length determined by the horse’s age. The jockeys – all boys — range in age from 5 to 12 (for Mongolian children, learning to ride is like learning to walk).

The races are one of three competitions at the fest. The other two – archery and wrestling – complete the games, which are a legacy of Mongolia’s period of the empire with a salute to the key skills necessary for a 13th-century Mongol warrior.

Eight centuries ago they were a fierce whirlwind sweeping out of the Far East, bringing unimaginable death and destruction to central Asia, the Middle East and Europe.

The Mongol hordes, led by Genghis Khan, were like nothing seen before. Some 100,000 ferocious and bloodthirsty mounted soldiers used the medieval version of shock and awe to subdue cities and kingdoms, creating the largest contiguous land empire in history stretching at its peak from Hungary to China.

Dynastic squabbles eventually dismantled the empire, but its heartland – Mongolia, survives today – partly within the People’s Republic of China and partly as an independent country.

Naadam Games are a Summer Highlight

In both places, the Naadam Games are a highlight of summer – the best time to visit this part of central Asia. Held each year from July 11 to 13 in the Mongolian capital, with both wrestling and archery taking place in a stadium near downtown, and the horse races out on the steppes.

Mongolia — the independent country — is an intriguing mix of cultures: a bit Chinese with an overlay of Russian culture and at its foundation, proudly Mongol. In Ulaanbaatar, the military parades in distinctive red and yellow uniforms, echoing China’s preferred colors.

The Mongol language, forced to adopt the Cyrillic alphabet during the Soviet era, is slowly reclaiming its elegant Mongol script.

Outside the capital, it’s hard to navigate without a native guide. Roads are mostly unpaved tracks in the wilderness, signage is indecipherable to the Westerner, gas stations are few and far between and distances are vast.

To avoid the hassles, I booked my trip through Travel All Mongolia. The tour group leader, Gunjidmaa Otgonbayar, who stayed with us for the 10-day journey, is an English teacher during the school year.

Here are some of the places we visited, using a combination of airplane flights and van transits.

In the Gobi, we stayed in gers (sometimes called yurts). Tourist camps are rows of traditional round tents albeit with beds — because tourists would rather sleep in beds than the floor.

In five of the six places we stayed, there were electric lights and outlets in the gers (a tourist does have to recharge camera batteries, after all). Bathhouses, much as you may remember them from summers at scout camp, provide Western toilets, showers, and sinks.

Karakorum, located at a confluence of ancient trading routes in the Orkhon Valley, was the Mongol capital in the 12th century.

When Kublai Khan decamped to what is now Beijing, the buildings were taken apart and the stones used to erect Erdene Zuu Khiid, the first Buddhist monastery in Mongolia.

The Soviet-era ended that use (Stalinist purges in 1937 shut it down completely).

Its religious purpose was restored with the collapse of Communism in 1990, and it’s worth paying the admission price to see inside the three temples.

Outside the monastery are two enormous stone turtles, four of which originally marked the boundary corners of Karakorum (which is also called Kharkhorin).

A stop in Khustain National Park offers a far-off glimpse of one of the modern era’s conservation success stories. Once extinct on the Central Steppes, the wild horse called the takhi (or Przewalski’s horse, after the Russian explorer who named the species) has been reintroduced in Mongolia and appears to be thriving. Definitely a skittish breed, tourists can glimpse them only at a distance.

The Khongoryn Els (also known as the Singing Sand Dunes)are vast — desert sand dunes that can be as much as 1000 feet high, more than 7-1/2 miles wide and about 65 miles long. And, yes, when you stand still and listen, the wind moving the sand does seem to “sing”.

A hike along the Yol Stream takes visitors to the unexpected sight of blue ice (glacier remnants) hidden from the sun in the deep gorges of the Yolyn Am.