Cyprus: The Wall of Shame

Crossing the Cyprus Wall of the Shame: The Last divided capital of Europe.

It seems that walls have passed away in Europe some time ago.

The wall of Berlin has broken already and become a wall for artists, and the old Soviet Union, which had control over half of Europe, is a country that children even don’t know about.

For that reason, I was surprised when I get to know Cyprus and the wall of the shame, or also named the green line.

It splits the whole country into two pieces, the north, and the south, and crosses just in the middle of the capital of Cyprus, Nicosia.

You have the feeling that something is going wrong here, but, what is wrong and why no one seems to do anything to change it?

To Nicosia Via Greece

As is my case, you will probably arrive in Nicosia through the Greek side, willing to visit the capital and going first to the information point to get some maps and supplies (By the way, there are really good information offices on both sides of the island, with a lot of free brochures to collect).

You will receive a big map of Cyprus and Nicosia, finding half of the map plenty of information, and another half completely white, written in big letters:

The north part of Cyprus was invaded in 1974.

Even if you ask for information they will just answer that they know nothing about the other side, and you must cross there and ask in their own information office.

My feeling, in general, is that they don’t know neither they are interested to know.

My feeling, in general, is that they don’t know neither they are interested to know.

The story from the Cypriots:

“North part of Cyprus is the really beautiful one, but nowadays you can’t go there” an old Cypriot driver, who picked me up while I was hitchhiking through the island, and tried to explain me.

“My father used to live in Famagusta, we had hotels there, but they were forced to move when the invasion”. One of the things that

One of the things that are still hurting in the Greek Cypriots is that a lot of families had to leave their houses, their villages where they had been living all their lives. They become refugees and had none an easy life with the change, living in small houses made in a fast way by the government to cover the families. This feeling which a lot of parents have passed to their children has continued throughout the generations.

UN Soldiers Weigh in on the Cyprus Wall

One day, I found myself speaking with some UN soldiers.  The UN is responsible for the area between the two countries, Cyprus and The North Republic of Cyprus, and they have different camps around all the island in order to keep calm, despite actually is the country has been calm since the invasion.

“The situation is hard” commented the English soldier, “From the Turkish side, they are more willing to arrive at a deal, but a lot of Greek Cypriots still remember it and is hard for them to forgive, maybe

“The situation is hard,” said the English soldier, “From the Turkish side, they are more willing to arrive at a deal, but a lot of Greek Cypriots still remember it, and is hard for them to forgive.

Maybe what they need is a change of generations in order to restore the normality in the island”.

Actually, you will realize soon that the people from both sides they don’t actually hate each other.

Cypriots from Both Sides

“Greek Cypriots and Turkish Cypriots (Which were a minority in the island) have lived together for centuries, and we still want to be together, but that problem has to be solved,” said one of my co-workers explaining me the situation.

Greek Cypriots are divided between them as he explained to me.

“When in 1974 Turkey invaded the island, we expected Greek to come to help, but they didn’t, so some people are angry with them and they feel separated from Greek country, being Cypriot is something different. On another side, other people said that Greece couldn’t do anything to help at that moment, don’t blame to them and they feel closer, like brothers.”

When you read about the story of Cyprus, in that brochures we took already in the information office, the story keeps more or less the same excepting the last part of the book.

“After the fall of the Ottoman Empire, Cyprus become English Colony until 1960, when the island became independent under the supervision of Greek and Turkey.

“Things didn’t go well, and the tension exploded, so “Turkey decided to do an illegal invasion of the island” following the Greek version.  Or “Turkey sent military forces to protect the Turkish-Cypriot minority, worrying about a possible Greek military coup.”

I can’t imagine which version of the story was taught to the children from the last 50 years, teaching them not to like the other side, fortunately, “The new politics are working on teaching in a more objective way,”  a freshly graduated teacher of Nicosia said.

Is interesting that not one of the locals told me, until I investigated by myself, about the referendum of Annan, supported by EEUU, which in 2006 was approved by the North Republic of Cyprus, but denied by the Cypriots.

“They wanted to give us money as compensation, we don’t want money, but to get back our homes.”. After that referendum, the situation keeps the same without any visual change. And I may keep like that.

The old city of Nicosia:

Actually, is completely possible to cross from one side to other of the island, as if you try to travel from Greek to Turkey, traveling by car and crossing any of the open checkpoints. But if we are just walking around in Nicosia, we will find out that there is a kind of magic line with buildings impossible to cross, which makes you zigzag around the small streets of the city.

It doesn’t look like a wall, it even feels kind of normal if it weren’t for some empty buildings or the shadow of some soldiers in the distance.

Fortunately, we have a point where to cross, following the main touristic street of the south Nicosia we will find a checkpoint of pedestrians and people crossing it, showing their passports in both sides in a completely normal and natural way.

Meanwhile, from the mountains of the north side, a big white flag is down by a stone, showing from a far distance to who owns the north part (A detail which actually I don’t especially agree with).

Both sides of the old Nicosia are completely different.

When in the south you will find the downtown with clubs and shops, quiet tourist, and normal houses when you move a little out of the tourist path, on the north side just a couple of steps far from the main street you will see ruined buildings, rubbish, and a feeling or abandoned and decadence, like nobody has touched those places since the invasion almost half a century ago.

The wall is there to separate both countries, but not to avoid being crossed, not for the locals or for the tourist, and everyone will recommend you to get the better of two worlds.

The north part seems to be more cheap and poor than the south, but what I found is that for a tourist it has similar prices. And meanwhile, our euros will work on both sides, the Cypriot country won’t accept Northern Cyprus’ lira.

As a tourist, we will need to take into account also, that if we plan to travel by train, we must pay a fee for insurance which covers our car on both sides of the island.

Another hot topic for tourists is to enter Cyprus, (and to the European Union) when landing in the Airport of the north side. This is not recognized by the European Union, and we can actually have problems because of a non-official stamp in our passports. For that reason, almost no planes from abroad fly directly here, but instead, they stop for at least for some hours in a Turkish city.

Nicosia is not the only city affected by the wall, actually, the city of Famagusta, which was the most popular touristic place before the invasion, is half abandoned and the area became part of the green line controlled by the ONU. They are different viewpoints where you can still see them, even some cranes of in-process buildings left suddenly.

Meanwhile, tourists from all of Europe come to Cyprus for holidays, enjoying the sun and the beach, having crazy parties or standing in front of the swimming pool all day, while their silence keeps the wall of the shame between the north and the south of this beautiful and divided island. 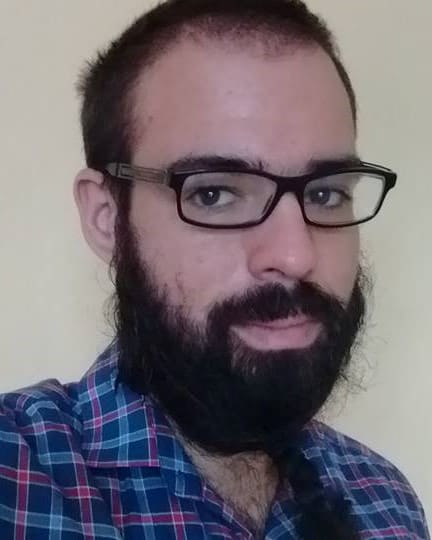 Abel Bordonado is a computer engineer born in Elche (Spain) who has focused his professional career as a travel experience. He has work and experience in different parts of Europe as well as now developing in Asia. As a traveler, he is fond of hitchhiking and volunteering, and nowadays he is working in New Delhi (India).