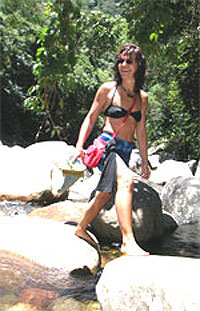 I’d been to every country on my list except for one, Brazil. The Brazil in my mind was passion, romance, the samba, fresh fruit, tropical beaches, and the bossanova. When I heard that in Brazil it’s rude to show up on time, I thought that this just might be the place for me. How could I not love a country where I’d never be late?

There was also the hope that in Brazil, I could blend in more easily than in Bali, my other favorite place on the planet. There’s no way I’ll ever look Balinese, but maybe I could pass for a Brazilian.

Brazil is a colossal country with more beaches than all of California and Florida put together, so where to begin? I started by visiting expatriates Jim and Debbie in the mountains in Teresopolis, 3,000 feet above Rio.

Jim emailed me in the U.S. saying that he and girlfriend Debbie had bought an estate in Brazil which included four buildings, one house, a spring-fed swimming pool, a vegetable garden and enclosed tennis court for $30,000. Was he joking? This was something I had to see.

Turns out, if anything, he was under-exaggerating. Thanks to a tip from local Brazilians, Jim and Debbie were able to purchase what looks like a Mediterranean compound for the price of a tool shed back home.

So what is a typical day like for Jim and Debbie in Tere (what the locals call Teresopolis)? The week I’m there, Jim, with the help of local laborers,is building a cement wall around the perimeter of the property. Debbie is sweating out a nursing paper at the downtown internet café and emailing back and forth with her instructors in the States. Both spend an inordinate amount of time with their neighbors (by American standards), also reading, and hiking in the Serra dos Orgaos National Park. It’s a tough life, but Debbie and Jim have to do it.

Jim is a Libertarian who loves to argue. We discuss everything from insurance laws (a crock of shit, in his words), to health care (a crime! he says), to circumcision (pure idiocy!), to politics (more idiocy!!!). About politics, Jim says, “ The Republicans want to put a camera in your bedroom and the Democrats a hand in your back pocket. I’ve had it with them both.” Debbie sits on the couch knitting, and just smiles. Before the week is over, I will have joined the ranks of those who no longer try to change Jim’s mind about anything.

There is one thing, however, that Jim and I agree on and that is that Brazilian women are the most beautiful in the world. The way they move belies their belief that sexuality is a natural state, not something to be squelched. Throughout Brazil, for example, I even saw pregnant women wearing thong bikinis. Even they looked like they knew they were hot.

“Ah, la abundancia do Brasilia!” Jim exclaims. An abundant bunda (think J Lo) is the part of a woman’s anatomy most admired in Brazil.

Trying to be Brazilian

Every country has a way of “being”. My personal approach to being in a foreign country, is to discern and adopt a culture’s nuances in as short order as possible. To stand out as a foreigner is to change the people and environment I came to write about. And so, although it’s true I’ll never really be a Brazilian, I can have a darn good time trying.

Take, for instance, the way women walk in Brazil: From the waist up, they stand tall and straight, necks long, chins tucked in. They place one foot directly in front of the other and their hips sway with exaggeration. I shadow local women at the mall and on the streets to learn the walk. Initially, it takes great effort not to charge forward, leading with my head. But after a few days I too am sashaying like a Brazilian without giving it a thought.

I buy rubber flip-flops and a tight pair of low-rise cropped jeans that were great as long as I didn’t sit down. My dark hair and light eyes, an anomaly at home, are commonplace here, as is the aforementioned abundant bunda. I am on my way to Being Brazilian.

A man in a café speaks to me in Portuguese, I reply in bad Portuguese,

“I don’t speak Portuguese”. “A e’ Francesa?” he asks. “No”. “E’ Americana?” “Yes”. The Australian man (it turns out) says that he never would have guessed. I’m going to have to learn to speak Portuguese if I hope to blend in.

Portuguese is one language I don’t mind unscrambling. I love the sound of it – hard consonants are softened into sh’s and ch’s and -odgys. And vowels are elongated. And all of it is spoken with a melodic lilt as if everyone is singing the same tune in turn. It is similar to Spanish – Differente, however, is pronounced differenchay, dia – gia. Kathy – Kaughtchi, and so on. Add a splash of French to really mix it up – Bom, pronounced Bon (good) – and you have the lingua of Brazilian Portuguese, a mixture of languages, like its residents who have settled here over the years.

We are invited to the neighbors’ for lunch today. Kathy and JaJa’s live across the cobblestone street from Jim and Debbie and at the top of a steep hill. I stop to catch my breath and to admire the hobbit-like house they built themselves over half a dozen years. Just below their’s is the fairytale castle of Kathy’s sister, Christiana. At the bottom of the hill is the equally charming house of Herman, Kathy’s father.

Herman was born here 80 years ago, shortly after his German parents immigrated to Brazil. He eventually married the indigenous Brazilian mother of the girls, which explains why Kathy looks Indian and Christiana, like a tall lanky German with angular facial features, albeit with hints of Brazilian in her hazel-eyes and olive skin. Each family member from grandchild to grandfather looks utterly unrelated. Ironically, Brazil was the last of the South American countries to free the African slaves, while today it is the most racially mixed.

JaJa has laid out a table for us topped with farofa (baked and grated cassava from the Amazon), sliced linguisa, cauliflower, white rice, a stew of beans and chunks of beef called feijada, and a brilliant plate of shredded carrots and beets. There is also Skol beer, and JaJa’s premium cache of cachaca (sugar cane alcohol that is to Brazilians as tequila is to Mexicans and just as deadly.).

Debbie rings to say she’ll be late. JaJa announces that we will wait. I say I’ll be at home writing until then and I head for the door.

“Tranquila, Tranquila,” JaJa says. “One should not rush through life. It is far better to contemplate life and philosophy with friends over tasty food and drink in the company of beautiful women.”

Ok, so I’ll stay.I make a mental note to slow down. To enjoy what is here, now. 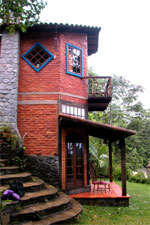 Hussein. JaJa says that Americans think they are free, but that they are not. He says it will take South America hundreds of years to recover from US intervention during the seventies. Kathy lightens things up by saying, “But we love Americans. And the men don’t dislike all American politicians. They love Prezedenche Cleentone and Moe-neeka Lewinschay”. The men guffaw.

I mention my surprise at the diversity of Brazilians’ physical characteristics. Jaja says that after Holland invaded Brazil they held it for seventy years during which time they intermarried with the former black slaves and Indians. “Muito bonita!” he says about the resultant blue-eyed, chocolate colored Brazilians that came from those unions. He says about his blonde haired son, “Luan, is a mixture of German, Spanish, Portuguese, Indian, and African. We are proud of our diverse make-up. But above all, we are Brazilian.”

One morning the rain stops. And so we pile into Kathy and JaJa’s car to drive the ten minutes into the national park. Following their lead, Jim and I (Debbie is working at the internet café) hop over rocks, under trees, stepping lightly over the spongy ground to the water’s edge where a cascade of water meets the creek. Then we are standing under a roaring fall, the sound of crashing water filling our ears. We paddle across the cool stream to a large granite slab which the two scramble up agilely. JaJa offers me his hand while Kathy holds his ankle.

We lay on our backs gazing at the azure sky. Suddenly Kathy takes off the beaded ring I’ve been admiring and hands it to me, “Here Robin, I made it for you, my friend.” And then we crawl over to the shady side of the boulder, where it is slick with moss, and together we slide down on our backs into the roiling water below.

Bundled up in Wool

Back at Debbie and Jim’s that night, I climb into bed in my unheated cabin fully clothed, with the hood of my coat pulled up around my ears, and three wool blankets piled on top. It is summer in Brazil, but in Tere’, the air is thin and offers little warmth once the sun has slid from sight. I’m growing restless for the heat of Brazil’s beaches.

The next morning we pore over maps and discuss my next stop. I tell them that I’m looking for towns within two hours of a major city, a sizeable expat population, bohemian community, and aesthetically tasteful architecture. They suggest Buzios on the Golden Coast north of Rio, and Parati on the Green Coast located half way between Rio and Sao Paulo. And I cannot come all this way to Brazil without going to Rio.

Teresopolis is Jim and Debbie’s paradise. For me it has been the perfect launch pad for Brazil, a country where until a week ago, I knew no one.

As for my first Brazilians, Kathy and JaJa? They are artists in love with life and they are incredibly generous. I suppose when you live for the moment as they do, it doesn’t occur to you to hoard some for yourself. If Kathy and JaJa are a composite of what other Brazilians are like, I’m going to love this country.

Rio is my next stop. My friends in the U.S. expressed great concern before I left about me going alone to Rio de Janeiro, reportedly one of the world’s most dangerous cities. What they don’t know is, that in spite of the fact that I haven’t lost my Pollyanna belief that down deep everyone has the same basic need for love and respect, I have developed a modicum of street smarts. It’s called blending in. In Rio I will heed Jim’s advice about dressing as if I’m headed for a day at the beach and I will carry no more than 50 Reals in my pocket.

Robin Sparks’ niche is writing about expatriate havens and the expatriates who live in them. She spent most of the past seven years searching the planet – from Bali to Bangkok, to Brazil and beyond, 23 countries in all – in search of a new country. Check it out at:robinsparks.com