Loosely described as a narrow stretch of land on the eastern shore of the Adriatic, this delightful part of Croatia has exquisite views, magnificent architecture, and fabulous food and wine.

What I never glimpsed in a three-week visit were the black- and- white spotted pooches of Disney’s One Hundred and One Dalmatians—the objects of Cruella’s desire.

Motovun, an easy two- hour drive from Zagreb, is a tiny (population under 600) town on a hillside enclosed by an ancient wall that you can traverse in seven minutes unless you pause to soak up the gorgeous surroundings. It’s also truffle central where an almost two and a half- pound tuber was dug up a few years ago.

Shops sell truffles au naturel; restaurants feature them shaved over pasta, fish, in cheese, honey and even mixed into ice cream. As I’m not a truffle fan, at lunch at Mondo, graced by Anthony Bourdain in 2010, I ate wonderful tagliatelle with baby asparagus. Non-truffle lunch for two with two glasses of wine was $30.00.

It would be easy to spend a half day at the Zadar Museum of Ancient Glass (admission  under $4.50 )  Housed in the 19th century Cosmacendi palace with a sleek modern addition, the first room is devoted to gorgeous contemporary glass but it’s the old pieces excavated when a local shopping plaza was underway that grabbed me.

Stemmed glasses, a luxury item, were often purchased using nuns’ dowries, an indication that women entering the religious life came from high-born families.  An area devoted to glass containers for medicines and cosmetics has jars and vials that once held beauty products for Roman ladies. Glassblowing demos and a lovely gift shop are part of the fun.

Zadar is also the site of the Sea Organ, a musical instrument-cum art installation that turns ocean waves into harmonious sounds with pipes and chambers tucked under marble steps. Sounds are totally random depending on waves and the wind. Next to the sea organ the Greeting to the Sun, made by the same artist: glass plates set into cement that light up at sunset.

A Jadrolinija ferry takes people and cars to the island of Hvar where you decamp at Stari Grad, the oldest town in Croatia, settled in 384 B.C. In the middle of the island, Stari Grad’s protected harbor is surrounded by olive groves and vineyards with ancient stone houses on twisty, cobbled streets.

In mid-April, Hvar’s workers were busy with cement mixers and pneumatic drills gearing up for the glittering high season that starts in May.

During the season, Hvar attracts celebrities as well as travelers who come for the beaches, cafes, bars, and nightlife.

Traveler’s Tip: this action brings both higher prices and crowds so unless bling and zing are what you’re after you might enjoy the island more in late spring or fall.

Hvar has been ruled by Romans, Venetians, Turks and the Austrian Empire; as you wander, all around are reminders of these civilizations like 16th century St. Stephen’s Cathedral built in Venetian style and the Franciscan Monastery where classical concerts are held in summer.

If you, like me, love sardines, eat them grilled or atop polenta in a tomato-based sauce with raisins and cooked onions.

Other fish as well as pasta, risotto often with seafood and gregada, a sort of stew with sea bass, potatoes, onions, and wine are integral to the Hvar dining scene.

The Town of Ston

The town of Ston is surrounded by an impressive wall and towers built in the 14th and 15th centuries to repel invaders. Europe’s answer to the Great Wall of China, it’s the site of the annual Ston Wall Marathon in September.  Ston is also famous for its salt pans that have been in almost constant use for 4000 years.

Salt harvesting takes place in summer but at anytime you can pay about $2 to see a video of the process and walk up close to the salt pans. Mali Ston, one kilometer away, is known for oysters.

At Bota, a lovely restaurant where you can eat outdoors gazing at the water, lunch for two with a dozen oysters, wine and dessert is about $50. Try the Ston cake, a local creation that incorporates a penne-like pasta.

Dalmatia is truly beautiful but didn’t yield a single Dalmatian dog although the breed is said to have developed in Croatia. Cruella would be miffed. 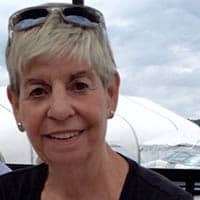 Mari S. Gold is a New York City-based freelance writer who contributes to many magazines and websites. Among the topics she covers are food, travel, health, the arts and consumer goods. An avid traveler, her blog, But I Digress… , deals with travel, food and  life experiences at www.marigoldonline.net.