Croatia: A New Life in a Small Village

Running Away to Home: A Family makes a big life move–to Croatia

Jim and Jen Wilson had always dreamed of taking a family sabbatical in another country, so when they lost half their savings in the stock-market crash, it seemed like just a crazy enough time to do it.

High on wanderlust, they left the troubled landscape of contemporary America for the Croatian mountain village of Mrkopalj, the land of Jennifer’s ancestors. It was a village that seemed hermetically sealed for the last one hundred years, with a population of eight hundred (mostly drunken) residents and a herd of sheep milling around the post office.

For several months they lived like locals, from milking the neighbor’s cows to eating roasted pig on a spit to desperately seeking the village recipe for bootleg liquor. As the Wilson-Hoff family struggled to stay sane (and warm), what they found was much deeper and bigger than themselves.

Chapter One Excerpt from the book


Dawn had not yet broken as I wrestled my suitcase out of my room above the bar in Mrkopalj, a tiny Croatian village nestled in a low mountain range that looks like the Alps but with fewer people and more wild boars.

I sweated my luggage down the creaky back stairway, careful to step quietly for fear that some of the rowdy drinkers whose noise had kept me up all night would now be snoozing somewhere among the empty bottles in the brown-on-brown murk of the bar.

I crept across a quiet courtyard surrounded by weeds, my breath coming in icy puffs, and I threw my stuff into the trunk of my rented Volkswagen Polo. As I hurriedly rubbed the fog off the windshield with my coat sleeve, hungry bears were creeping down those mountains to rob the wilting gardens of the village.

They wouldn’t find much. Most of the cabbages in Mrkopalj (pronounced MER- koe- pie by the locals) were fermenting in wooden barrels by now; potatoes were stacked in red net bags in root cellars.

What the bears did not know (and I didn’t know yet, either) is that they would find more action at the local drinking establishment that was now in my rearview mirror, a place operated by a man who was, in spirit, one of them.

The last shreds of the night still cloaked Mrkopalj’s eight hundred residents and their yard chickens as I skidded past Jesus and the robbers on Calvary, the sheep near the post office, and the dark doorway of a drunken tourism director. This was the land of my maternal ancestors, the village my great-grandparents left behind when they immigrated to America a hundred years ago.

From what I’d seen so far, it hadn’t changed much since they left. This, in theory, was a good thing, considering that my husband, Jim, and I were planning a back-to-basics family sabbatical abroad with our two little kids as America’s economy hit the skids. 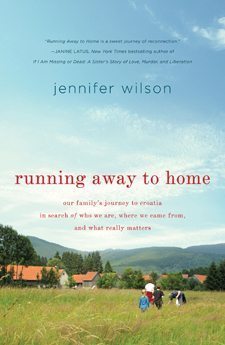 In the spirit of scouting possibilities, I planned to explore Mrkopalj for a week.

I fled after thirty-six hours.

The engine of my tiny Euro car whined as I floored it out of the last century. One urgent thought pulsed continuously through my mind as the sun began to rise: Get me the hell out of here.

I had come to Mrkopalj in search of a home. A rustic, simple country home that I hoped to recognize on some deep and spiritual level. Preferably something that smelled like baking bread, or maybe hay.

Though I knew so little about Mrkopalj when I set out on this scouting mission, I’d been to enough of my older relatives’ funerals to know that I look just like them, with knobby cheekbones and eyes so deep-set that I’m pretty sure they’ll eventually emerge from the back of my head.

In a way, Mrkopalj is an essential part of who I am. Unfortunately, I discovered, this revealed me to be isolated, mildly alcoholic, and dentally challenged.

So that was disappointing. As I mentioned above, Jim and I had been working up the courage to do something we’d always dreamed about: escape to a place where we could live simply with our kids, Sam and Zadie. We’d shared the dream of living overseas ever since we’d met and married ten years before in Des Moines, Iowa.

Driving the Kids Around

The dream faded as we built our careers— me as a moderately successful travel writer, he as an architect. It disappeared altogether when the kids came along. We dove blindly into the blur of the American family frenzy, with all its soccer practices and frivolous shopping trips to Target. We worked. We drove the kids around. We shopped.

We were chest-deep in the fray when the escape fantasy began to revive in me. I wanted to get back to that essential kernel of connection that had brought Jim and me together in the first place. We’d worked hard and happily to carve out our own version of the American Dream.

We renovated a house together in lieu of dating. When we married, we promised that above all, we’d provide each other with an interesting life. We raised two babies in our homemade house, where I planted big gardens under the open sky of the uncrowded state where we both grew up.

Then, somewhere along the line, things got complicated. I worked during naptimes and at night while I stayed home with the kids, writing in my half-sleep, parenting in the same manner— I was doing it all but none of it well. I found myself mindlessly rushing to school or to swimming lessons or to ballet or to work or making another trip to the store; anything to distract my mind from the endless needs of the kids and the longest single-syllable word in human history: Maaaaaaaaaaaaaaaahm.

The manufactured schedule replaced a more tangible life. And really, Sam and Zadie just wanted to hang out at home and wrestle and play beauty shop with Dad, though the 6:00 to 7:30 P.M. window of time that Jim actually spent with his children was filled with the chaos of supper, baths, and bedtime. We ran because we couldn’t sit still. Neither of us knew why.

As we were living this life of distraction, we began to accumulate things. At final count, Jim had bought three grills— the last one cost us four digits. “You can make naan in it!” he’d announced at the unveiling, stepping aside on the porch to reveal a large oval-shaped ceramic urn mounted on a wooden platform. It looked like an altar. But I wasn’t in any position to judge.

My shoe collection closely resembled a DSW store in my closet. Restlessness circulated through our house like that one smell that happens when a mouse crawls into the ductwork and dies. Sort of vague. Faint. But pervasive and disturbing. I’m not lodging a complaint here; we were comfortable physically, and that’s more than I can say about three-quarters of the world. But for that very reason, it just didn’t seem like the right way to live anymore.

Jim and I looked at each other across the shopping cart one Saturday afternoon, both of us holding the Starbucks that accounted for $150 of our monthly household budget, SUV idling in the parking lot, kids grousing that the Lego set they’d chosen was somehow lacking, and asked ourselves: Is this the American Dream? Because if it is, it sort of sucks.

It was into this void that Mrkopaljcame calling.

From Running Away to Home: Our Family’s Journey to Croatia in Search of Who We Are, Where We Came From, and What Really Matters by Jennifer Wilson. Copyright © 2011 by the author and reprinted by permission of St. Martin’s Press, LLC.