Cruising Croatia with a Hand-Picked Group

On a warm September morning, some friends and I floated in the clear waters of the Adriatic Sea off the coast of Croatia. We told 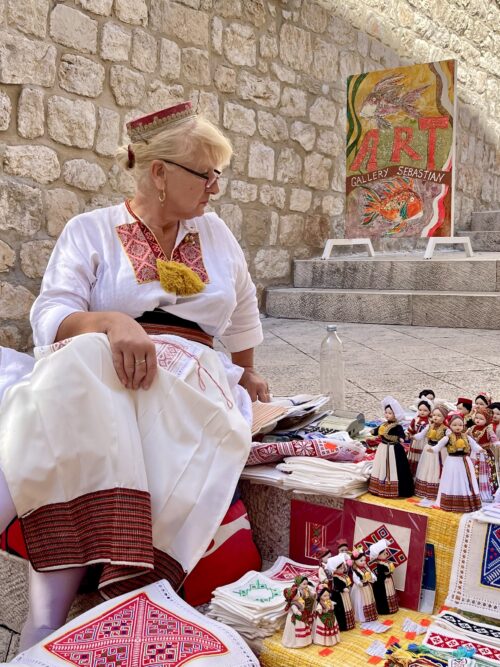 ourselves we would gift-wrap the memory to sustain us through the cold winter to come.

How we came to be swimming off the back of a small cruise ship is a story in itself.

Eighteen months earlier, after watching the world unraveling in the Covid pandemic, the circle of friends who make up my Chicago book club decided to plan a Covid-safe travel experience.

We thought it could be done, even amid the fear and uncertainty we all faced. Vaccines had just become available and with them hope for a return to normal life.

We met on an icy-cold February day, wrapped in blankets in an oversized garage/entertainment space so that we would have room to spread out. And we talked about how we could plan travel that would be safe.

At first, the discussion was casual, but soon we zeroed in on a small-ship cruise through Croatia, with Katarina Lines, a company I had cruised with before as a travel writer.

We decided that we would plan the trip for 2022 and still take all the precautions. Just to be safe.

That’s how it began.

After nearly 18 months of planning—including discussions on Zoom and on our Chicago Bookies and Friends Facebook page—we set sail this past September, on a one-week cruise from Split, Croatia.

Joy and Discovery Across Croatia

It was a trip of joy and discovery, with many of the travelers commenting that it was the best trip they had ever taken. Some of that enthusiasm, while certainly warranted, must be due in part to finally traveling again after being stuck at home because of the pandemic.

Our group of 26 travelers met on a Saturday afternoon aboard the M.V. Futura, a 156-foot-long ship docked in the Croatian city of Split. Folks had traveled from at least five U.S. states and from Ireland and Germany to join this cruise. No one knew everyone. Everyone knew someone.

Though we started out with invitations to book club members, only three original members and spouses joined in. We then expanded it to friends and family.

What we ended up with was an international group generally in their 60s and 70s, though there were a few younger outliers. Many, but not all, were retired.

We had architects, lawyers, journalists, teachers, a doctor, a nurse, government workers, a university librarian, and a small group of my travel writer and photographer pals who rounded out the mix.

I had been a bit nervous that the group wouldn’t mesh, but I needn’t have bothered. The onboard breakfasts and lunches, when we all met in the single dining room helped people get to know one another.

We discovered that the Irish citizens were sisters of book club member Jeri Linas, and the German couple was cousins to a suburban Chicago traveler.

I even met Chicago neighbors I hadn’t known before. For most of us, there were enough new people to make the conversation interesting, but enough familiar faces to ensure comfort. Add to that, of course, the fun of hanging out with old friends while sipping cocktails on a moving boat.

The seven-night cruise, starting and ending in Split, came with a budget-friendly price tag, of 1,890 Euros per person for main deck cabins, and 1,620 Euros for the lower deck staterooms.

The low, 100 Euro deposit to book the cruise, was a plus for many since we started planning more than a year in advance.

The final payments weren’t due until three months before departure, meaning that anyone who still worried about the state of the world as departure neared would be able to cancel easily without losing too much money.

The 19-cabin Futura is described as a luxury vessel, but while very nice its public areas and staterooms aren’t like the high-end facilities on board Viking ships, for example.

The staterooms are comfortable, the single dining room is spacious with fine furnishings, and the top deck with hot tub and lounge chairs is stellar, but mostly because of its views of the water.

Coffee on the Top Deck

Sitting on that top deck with a morning coffee, surrounded by friends, while moving through the clear waters of the Adriatic, was a daily occurrence that truly made each day begin with a little bit of joy.

Typically, the boat would leave early each morning and sail for a few hours while passengers breakfasted before stopping for a morning swim somewhere along the way.

Those stops usually lasted for a couple of hours, before the Futura headed to the next destination.

Along the way, lunch was served, and we usually arrived by mid to late afternoon, in time for a brief, included walking tour of whatever city we were in.

Some evening dinners were included but some were not, giving passengers a chance to taste the local cuisine wherever we docked.

For some of us on board, including me, the morning swim stops were a highlight.

The water was so clear and the bays where the boat stopped so beautiful, that these were daily “pinch me” moments.

Some of our group also tried paddle-boarding, stand up or sit-down, during the swim stop. But you didn’t need to have strong swim skills since life preservers and other swim toys would keep you afloat in the calm waters, not far from the boat’s back ladder.

The rhythm of the days on this itinerary is part of what attracted us to small-ship cruising in Croatia. There was time to simply relax and watch the world go by as the ship cruised.

But the swim stops and daily excursions provided enough options for active travelers without overtaxing those who wanted a slower pace.  Croatia was new to many on this cruise, and the historical and cultural experiences like Diocletian’s Palace in Split and Dubrovnik’s old town were a big draw.

During the week, we visited small villages and bigger cities, including the ancient walled city of Dubrovnik. We reached Dubrovnik at sunset on the third day of the cruise.

The Futura sailed around the walled city with tour manager Stan Utrobicic telling us about the city’s history as we cruised by.

Then, we listened to Croatian music on the ship’s speakers as the city’s lights came on. It was a remarkable experience.

Besides Dubrovnik and Split, the country’s second-largest city, cruise stops were varied.

They included Korcula, home to famed traveler Marco Polo; Hvar, the jet-setter island, where at least one bar doesn’t open until 2 a.m..

Mljet, where we hiked, rode bikes, and swam in salt lakes in a national park; the town of Kuna, where we visited a farm and dined on local specialties; and Bol with its tourist promenade and Dalmatian beaches.

The food on board was noteworthy and regularly praised. Breakfasts were served buffet style with fried eggs, bacon, and sausages, along with fresh fruit, yogurt, cereals, and pastries.

Lunches highlighted plated offerings such as seafood or beef with pasta or potatoes but included a spectacularly colorful salad bar with tomatoes so fresh and bright red they almost looked fake. They weren’t. The few vegetarians were happy with the options.

A small ship like the Futura doesn’t typically offer onboard entertainment or activities, but we organized some of our own.

One Chicago neighbor led yoga sessions most mornings at 7 a.m., frequently joined by some of the travel writer contingent from Michigan and Iowa.

And we had our own university librarian, and book club member Karen Brown, who had selected in advance some books that highlighted Croatia.

Prior to the cruise, many of us had read “Girl at War,” Sara Novic’s novel focused on the 1990s Yugoslav civil war. So midweek, we scheduled a book club meeting with all invited.

Also joining was one of the crew, a young woman about the same age as the author, who told us about her experiences during the war.

Early on, it seemed as if we had all the time in the world to enjoy this cruise, but soon the last night was upon us.

We docked in the small port of Milna and did some souvenir shopping while the crew prepared the final night’s Captain’s dinner; beef tenderloin, parmesan mushroom pasta, and chocolate cake.

Two local musicians came on board with a keyboard and guitar. There was dancing and drinking, much photo-taking amid the goodbyes, and even a conga line. But everyone felt it when the moment that became a capstone for our cruise happened. 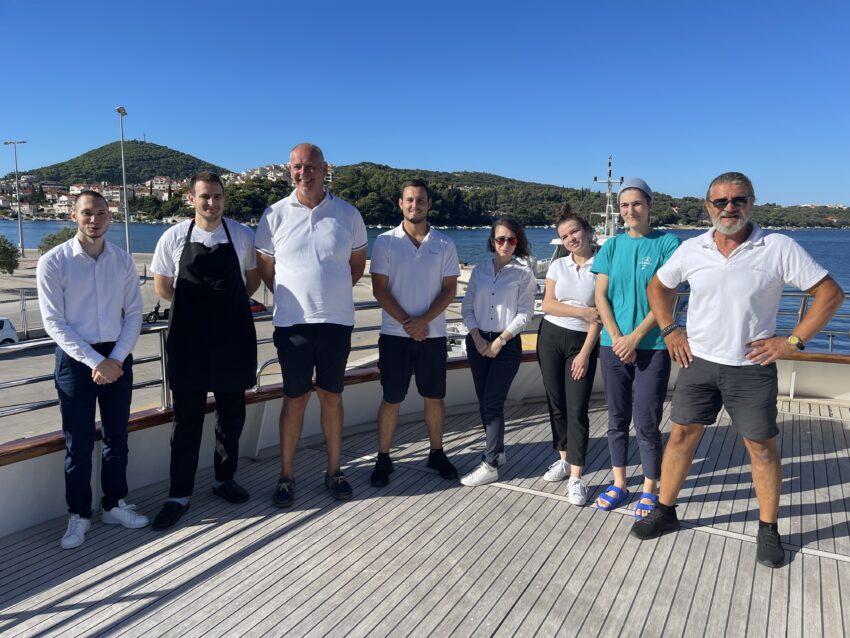 Another Chicago neighbor pulled out his harmonica and walked up to the stage when the band from Milna, Croatia, started playing a familiar song.

He joined in and many of us danced for a long while to the familiar blues notes of “Sweet Home Chicago.”

For more information: You don’t have to book the whole ship to take a cruise like this. Check out the website at Katarina-line.com for details.

The company has more than 60 small ships cruising the Croatia coastline offering departures from April through October. But if you start planning far enough in advance, you might be able to get a whole ship to yourselves. 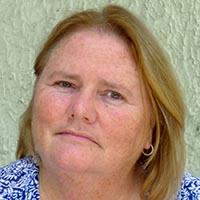 Terri Colby spent decades as a journalist following hard news stories before she wised up and started roaming the world as a travel writer. Her favorite travel stories always seem to involve amazing natural wonders. But cruises, fine dining, and boutique hotels are always on her radar. She’s vice president of SATW’s Freelance Council. Follow her at imsleepingaround.com or on Instagram.