Guilin in southern China, once a remote outpost of empire, has long been south China’s most popular travel destination for its outlandish scenery.

A Song dynasty (960-1279) governor of Guangxi, Wang Zhenggong described Guilin’s river and hills as ‘the best in the realm’ and in modern times they have become synonymous with an idea of Chinese landscape beauty.   Guilin’s surreal karst landscape was even chosen as the real world location of Chewbacca’s home planet in Star Wars.

Although I have lived in Hong Kong for many years now, for some reason I had never bothered to make the four-hour train journey to Guilin. Perhaps it seemed too obvious a destination for someone who feels most at ease going off the beaten track.

Well, we were finally there working on a new guidebook in the depths of this winter and I found that while the scenery certainly didn’t disappoint, Guilin’s appeal to visitors goes far beyond this. 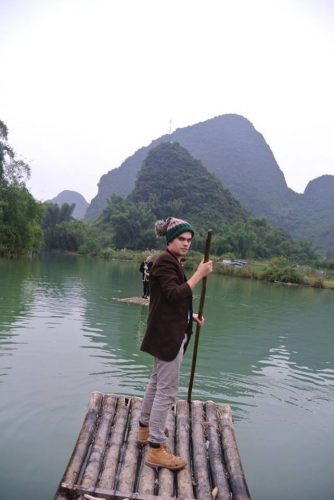 OK, I admit the Li River is still the Guilin centerpiece. Millions each year take to its green waters in tourist boats, weaving between bizarrely shaped peaks, submerged islands, and paddy fields, in search of scenery that has come to epitomize Chinese landscape beauty.

In the depths of winter, the river’s waters were brown and swollen. Our barge with English speaking guides left from Guilin’s Mopanshan Pier and set off along the most scenic stretch of the river towards the backpacker haven of Yangshuo.

Over the course of our nearly five-hour journey, a fantastic karst landscape unfolded, reflected in the limpid green waters.

The outer skin of the limestone peaks has been washed away through millennia of water erosion leaving a fairytale picture book.   As the river meandered south towards Yangshuo the karst formations became more picturesque, with many having names like Camels Crossing the River and Nine Horses Picture Hill.

The marvel of the rice terraces brings tourists in their busloads to this remote area north of Guilin.   Unlike the karst landscape synonymous with Yangshuo, which was carved by mother nature, these iconic terraced hills were very much made by the hand of man. The rice terraces are a great place to learn about the traditions and cultures of China’s minorities whose villages predominate here.

The local Yao and Zhuang minority fleeing Han Chinese encroachment led an isolated life but were pushed ever higher into the hills. Forced to cultivate ever-steeper slopes, they cut the landscape into the remarkable step formations that remain to this day. At the entrance to the Longji Terraces Scenic Area there’s a place where our bus stopped for us to buy a mandatory RMB100 (US$16) ticket.

After this there remained a considerable drive into the scenic area itself, home to 13 villages in total.   Consider staying the night in one of the villages to break the hike.

Daxu Ancient Town, one of many ancient river towns along the historic water axis of the Li River, turned out to be an unexpected treasure for history buffs like me. Daxu’s location, just 20 kilometers

southeast of Guilin, made it well worthy of a day trip from the city. We got the bus service from Guilin Bus Station to Guanyan which passed by Daxu Town.

Daxu literally means Big Market and this place really does have a long mercantile history to speak of. Founded in the Qin Dynasty, 2000 years ago, Daxu came to prominence in the Ming Dynasty, though most of the surviving architecture dates back to the late Qing period.

Said to be one of the four famous ancient towns in Guangxi, it was Daxu’s strategic location on the Li River that made it a natural trading hub.   We particularly loved the remnants of 13 old docks which could be discerned along the waterfront.

Idyllic Yangshuo nestles snug between karst peaks on the east bank of the meandering Li River near the confluence with the Yulong River.

The secret of this charming hamlet has long been out, with a throng of Chinese and foreign tourists pacing the town. It’s still fun though. From top to bottom, West Street is lined with handicraft gift shops and laid-back eateries and bars.

Yangshuo may be a mecca for backpackers, party-goers, sightseers, and climbers but only a short distance outside the township is still the allure of its natural scenery and rural life.

Easily accessible is the “Ten Li Picture Gallery” several kilometers to the southeast, making Yangshuo an excellent base for exploring the county’s peaks, caves, and river ways.

With its thousands of karst peaks, Guilin is a mecca for rock climbers who come from around the world to scale the crags and cliff faces. The first local peaks were mastered by German climbers in the mid-1980s. Then routes were opened up by American and Chinese climbers in the early 1990s. Now there are over 800 sports climbing routes.

Alas, despite former remedial membership of a London climbing center I am still shaky with heights, but my Aussie friend Peter took to the slopes with alacrity.

Guilin’s popularity is based upon the many and varied routes, the quality of the rock, the accessibility of the peaks and its low cost. Popular local routes include the aptly named Swiss Cheese, a pockmarked karst cliff excellent for lower to intermediate climbers.

Guilin’s karst topography not only extends to the spectacular pinnacles above ground but also under the surface of the earth. Below ground, Guilin also has a vast array of sinkholes, dolines (a depression, where the surface crust has collapsed), underground streams and rivers; as well as caves.

The low-hanging fruit for spelunkers (cave explorers) in Guilin are the popular “show caves” generally run by State-owned enterprises.

Each of these well-lit caverns has paved paths, gantries, guardrails, guides and facilities and are illuminated by multicolored light shows that highlight cave features.

However, karst caves in a tropical area like Guilin are susceptible to moisture and inside the cave is often quite wet and I can vouch from painful experience that it can be slippery under foot. 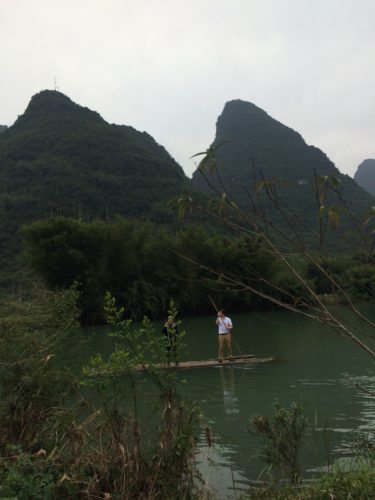 Dashing under umbrellas through some of the many parks fashioned from the green gold of Guilin’s karst hills we became captivated by their ancient graffiti —  the thousands of inscriptions, poems, travelogues and epigraphs left by long-ago visitors expressing their wonder at the scenery. Some 22 of 43 stone inscriptions on aptly-named Elephant Trunk Hill are of Song dynasty provenance, along with 111 of the 213 from Guihua Tablets Forest, and 79 of 261 in Putao Mountain.

Guilin’s blingiest tourist attractions are the Two Rivers-Four Lakes, boat tour, which we experienced at night.   The city is something of a Venice of the East, being built around a system of waterways. Our flotilla of tourist barges threaded the Li and Peach Blossom rivers and crossed four lakes, Mulong Hu, Gui Hu, Rong Hu, and Sha Hu which were formed more than one thousand years ago in the Song Dynasty.

Our Two Rivers- Four Lakes experience was embellished with vignettes of traditional Chinese culture: around Mulong Hu is clustered nouveau Song dynasty architecture. Our tour clearly tried to evoke the ambiance of ancient China leisure craft and as we drifted, floating platforms eerily lit up and troupes of performers in traditional costumes sprung to life to perform folk songs.

Guilin’s most impressive historical site is the Jinjiang Prince’s Palace, originally built between 1372 and 1392 as the official residence of a great nephew of the first Ming Dynasty emperor Zhu Yuanzhang. The palace is like a mini version of the Forbidden City in Beijing, with its instantly familiar oblong template and perimeter wall.

Fourteen Ming kings from 12 generations would come to live here and the little-known palace offered us a uniquely intimate insight into court life in imperial China. Most evocative was the nearby Guangxi Examination Cultural Exhibition Hall where wannabee officials once came from all over southwest China to meet their fate in the notoriously grueling civil service examinations.

We were encouraged to sit in one of the dank tiny rooms where scholars and put our Chinese skills to the test, before emerging to be presented with an ill-deserved certificate.

While it is typical of towns across China and East Asia to serve versions of a similar rice noodles dish, Guilin Rice Noodles are truly authentic.

Made from locally grown rice that is pressed and molded into noodles, it has a delicious vermicelli style texture – typically each restaurant offers their own special gravy and it is up to the client to add in their choice of spices, chives, chili peppers, and other bits from a selection of pots around the restaurant.

There are numerous places to try this staple, but our undisputed favorite was the original Guilin Rice Noodle Bar in the heart of the touristy Zhengyang Pedestrian Street. Not only did they offer a staggering range of noodles but we also appreciated their home-brewed black beer. Delicious!

Harvey Thomlinson is a Hong Kong-based writer and publisher of . “Must-read guides for history and travel buffs.” Time Out.   Harvey has translated Chinese novelists like Murong   Xuecun while his own fiction has appeared in journals like Experimental Writing and Tears on the Fence.

www.gonomad.com
This article was last updated Oct 16, 2019 @ 4:22 pm
If we've inspired you to travel with this story, why not check out the prices to get there and make it happen. Search airfares, hotels, and rental cars here. Thanks!