Biking Across Scandinavia from Russia

I felt the wind as it rippled across my skin and the sudden gust that caught the wheels on my bike.

I was overwhelmed by the smell of the place I was pedaling through whether that was the sea air filled with salt or the scent of pine needles after it had just rained.

I was overwhelmed by the smell of the place I was pedaling through whether that was the sea air filled with salt or the scent of pine needles after it had just rained.

Sights and sounds around me were sharp and clear, allowing me to be engulfed in the moment in a way that no other mode of transport had ever afforded me.   There is something about cycling through the world that captivates me. Come with share my journey through Scandinavia on a bicycle.

I left Saint Petersburg with fellow adventurer Arron in mid-March. Our route biking Scandinavia would take us through six weeks of spring, a lot of pedaling and over 2,000 km through Russia, Finland, Sweden, and Denmark.

We planned a rough route before leaving, but, as with any long adventure, it is best to leave some unplanned, allowing freedom to go with the flow once traveling. There is nothing better when on a bicycle to take a spontaneously different route, whether recommended by a local or by signposts along the way and both Arron and I had wanted to allow ourselves this.

Though technically not part of Scandinavia, it was where our journey began. It was still cold and snow lay in patches on the ground but the promise of spring hung in the air. We enjoyed a final day off the bicycles in Saint Petersburg, dubbed the Soviet “City of Love”. Surrounded by such beautiful architecture that spanned the centuries it was easy to see why it had earned this name.

After rebuilding our bicycles (previously dismantled for the train journey that had brought us there), we headed north.

A somewhat confusing city to cycle around, we ended up double backing on more than one occasion and doing a few circles in horrible and heavy traffic, before finally escaping the clutches of suburbia and hitting the coast road.

For the first time in my life, I saw the sea startlingly white in the bright sunshine. At first glance, I couldn’t work out why it was neither blue or gray (an, unfortunately, common sea color where I am from). Then it dawned on me. The sea was frozen!

The frozen sea and snow on the ground might have put some off camping, but, well prepared with arctic sleeping bags and winter gas for our stoves, we were undeterred.

We wild camped almost every night of our journey, hunting out hidden away clearings in forests on the side of the road, or small beaches beside the sea.

We would look on the map on the morning to find woodland marked that we might be able to camp in that evening. It is legal in much of Scandinavia to camp in public spaces and woodland and it is one of the best ways to really get in touch with nature, rising as the sun does and sleeping as it sets.

It was on one such morning, where we had camped the night before on a secluded beach a kilometer from the road, that we saw fishermen, clad in heavy oilskins, walking out across the ice.

Perhaps I do not need to say that of course, we left no trace at any point. We dug holes to bury our waste and carried all of our rubbish away with us, recycling when possible.

Wild camping allowed us to enjoy nature unspoiled, and I hope that anyone else who might camp for free in the woods will do the same.

Crossing the border into Finland, we were immediately greeted by a cycle path. It was a relief to leave the busy roads and trucks of Russia behind, and cycle instead of on trails or quiet roads.

The landscape changed too. Larch woodland was still present in vast quantities but interspersed with fertile farmland, freshly plowed and waiting to be reseeded.

In Helsinki, we stayed with a couple, found on a hospitality website especially for cyclists, called Warm Showers. They took us to a traditional sauna by the sea on the evening. This is an absolute must for any tourist and there are saunas to suit everyone. We were especially grateful after a week of cycling over hills, finally able to rest our weary bodies in the warmth of a hot steam room.

Our journey through Sweden took us from Stockholm on the east coast, where the ferry from Finland docked, across the country to Gothenburg on the west coast.

We cycled past countless lakes, nestled on hilltops and in valleys, in between trees and often out of sight from the road. We found them only because we were on bicycles, able to explore narrow tracks through the forest as we hunted for the evenings’ camp site. 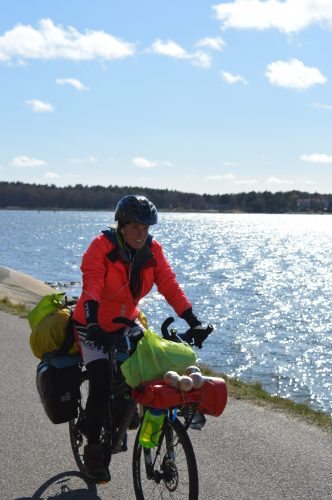 It was in one of these beautiful lakes that I decided, after a particularly warm spring day (we had long since left behind the snow that plagued our pedaling in Finland) that it was time for me to take a dip.  Still wild camping, we set up camp on the edge of Lake Ivag and as the sun set over the hills beyond, I took the plunge.

It was icy cold!

I did manage a few strokes, but little more. I was under no illusion that I could swim for long – the water was just too cold!

Having said that, I had no regrets about going in either. There was something incredibly liberating about swimming in water that stretched to the forested horizon and was pure enough to drink from.

Once we hit the west coast, just north of Gothenburg, it was time to head south. We followed an incredible trail called the Kattlegattleden through the islands that make up the majority of the coastline in this area. Pink granite boulders, unique to the area rose up from the sea and made for a striking skyline as we cycled along the coastal path.

We continued to follow the coastline south, past Gothenburg and the islands until Helsingborg. Most nights we camped on beaches or rocky outcrops, overlooking the sea and breathing deep the air.

By now, wild camping was warmer and evenings were lighter and longer than ever. Instead of using our camping stoves, we built small fires out of wood to cook on.

We dug fire pits in the earth and put stones around the edge to balance our pots on, cooking soups and stews to sustain our hungry stomachs. As with wild camping, we were sure to leave no trace afterward, burning out the fires and recovering the holes we had dug with the earth we had removed.

We cycled just 20km, our shortest day yet, on our first day in Denmark. It is only a small country, and we wanted to enjoy our journey into the capital city the following day. Once more, we followed the coastal road the entire way, with perfectly paved cycle paths and signposts to guide us.

Bivouac in the Woods

We spent our last evening in the heart of a woodland just 20km north of Copenhagen. We followed our map that pointed to this area with a small triangular tent. Expecting a campsite, what we found was much better; a small, handmade bivouac shelter made of fir branches. There was even a fire pit with tree trunk benches around it.

We built a fire and made hot chocolate. Then, as it had been a short day of cycling, we sat down with a branch of wood each and our knives and began to whittle ourselves spoons. Neither Arron or I had ever made a spoon before, but with some careful trial and error, we both had a small wooden spoon by the end of the evening.

Carrying all of our luggage meant that my desire to buy souvenirs was non-existent. Instead, a homemade spoon made from the forest we slept in seemed like the perfect memento.

No long trip is perfect every day and everything has its lows. Cycle touring is no different.   It can be intense to cycle with one person for an extended amount of time, and it is important, to be honest with one another, to ask for space or extra help when needed and always to pull your weight with chores.

It can also be difficult when things go wrong, which they inevitably will. Basic knowledge of bicycle repairs, though not always necessary, definitely makes life on the road that little bit easier, which can make a big difference to your day.

I am often asked how it is possible to afford to travel for such extended amounts of time, but cycle touring can be a relatively inexpensive way to travel. We tried to stick to a budget of $5 per day per person for food. Although this could not cover meals out, we ate very well on this by cooking on our stoves. We budgeted another $5 per day for contingencies – bicycle parts and repairs and additional transport such as ferries.

The largest outlay, and most important, when touring is the equipment. We spent $1500 on our equipment prior to leaving, which included a bicycle each, a good quality tent each, arctic sleeping bags, stoves, clothes, panniers and spare parts.

As with life on the road, gear can range in price from cheap to expensive, but whatever your budget, try to buy the best you can afford, as it will last a long time and make life on the road that little bit more comfortable.

Cycling is only a small part of cycle touring. And whilst there are many ways in which to tour, almost every cycle tourer will tell you that it is the perfect way to travel. It offers that sought-after balance between moving on to new places but slowly enough that each new place along the way can be enjoyed. After all, it really is the journey that counts! 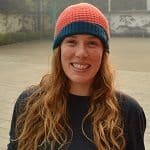 Laura Ricketts is from the UK and loves the wild places of the world. She tries to find alternative ways to travel instead of flying to minimize her environmental impact and maximize the adventure!  She works seasonally and is currently writing her first book.